In Pyongyang, attractive young policewomen wearing characteristic uniforms with peaked caps, white jackets, and royal blue skirts are a common sight in many traffic intersections. These officers, bearing whistles and batons, are known for dutifully directing passing vehicles with discipline and brisk efficiency. Any foreigner who visits North Korea is sure to see these classic icons in the capital city.

However, there is more to the story. There are areas in Pyongyang where riding bicycles is forbidden. The purpose of these no-ride zones is to keep the cityscape clean, orderly, and aesthetically pleasing - indispensible elements for the showcase capital.

Yet, for ordinary citizens, the bicycle serves as a vital means for daily transportation.
As a result, precarious games of cat-and-mouse between the traffic police and citizens regularly ensue in these areas. Our North Korean undercover reporter Gu Gwang-ho has captured images of these incidents with his hidden camera on a typical day in the Taedonggang District of Pyongyang. 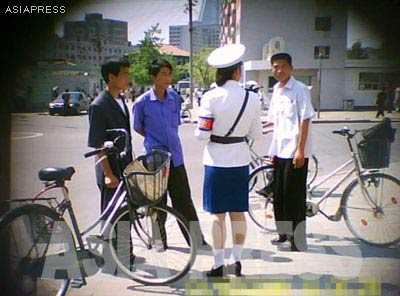 These three men were stopped at an intersection and reprimanded for riding their bicycles in an illicit manner. Usually, when detaining a citizen, the officer starts by confiscating his or her identification card. This move prevents resistance and ensures obedience most of the time. Citizens typically resort to the fastest and easiest way of resolving the problem: bribery. The "price" was around 500 won (12 U.S. cents) at the time this photo was taken. [Gu Gwang-ho, 2011] 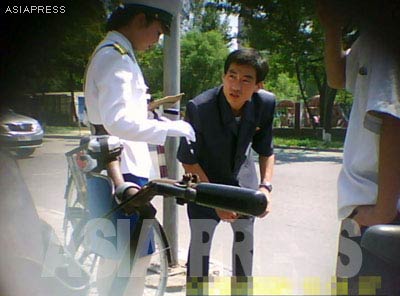 A policewoman issues a man a traffic ticket. Many citizens who do not want to pay for a ticket try to bribe the officers for a lesser amount of money. Working as a traffic officer is known to be lucrative, and for this reason policewomen must secure their positions through connections to ranked officials.[Gu Gwang-ho, 2011] 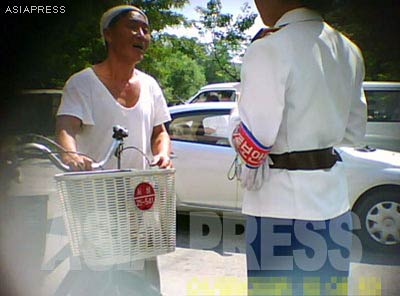 A middle-aged man in a white t-shirt is stopped by a traffic safety officer. Although it is not obvious, he is a member of the military. Military personnel are prohibited from riding bicycles and wearing civilian clothing in Pyongyang. The policewoman's armband reads "Traffic Safety Officer." [Gu Gwang-ho, 2011] 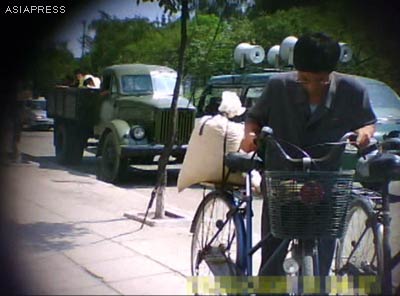 For the vast majority ordinary North Koreans, bicycles are a very important means of transportation. To prevent bicycle theft, citizens do not leave their bicycles outside at night. Instead, they haul them to their apartments, even when they live on the upper floors of buildings in which elevators are nonfunctional due to near-constant electricity shortages.[Gu Gwang-ho, 2011]