In the mid 90s, a number of “kotchebi”, which means “flowering swallow”, roamed around cities in throughout North Korea.  During this chaotic period, known colloquially as the “arduous march”, children became kotchebi because their parents had died or had abandoned them due to their inability to take care of them because of the collapse of the distribution system.

The number of kotchebi has gradually decreased over the last 20 years because, instead of relying on the dysfunctional food rationing system, people have learned to make their livings out of small businesses within the jamadang markets. 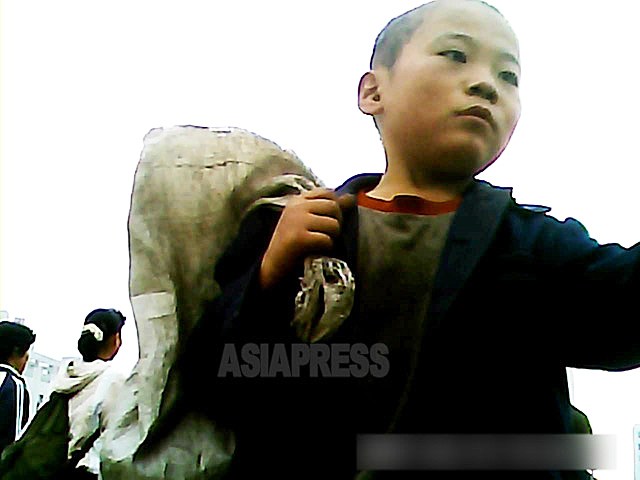 A boy roaming around a city with a big cloth bag. The photographer said that, “He may have escaped from a detention center for orphans since his hair is entirely shaved off.” September 2013, in Pyongsong City, South Pyongan Province. Taken by ASIAPRESS.

All of ASIAPRESS’s reporting partners say that the number of kotchebi in large cities has greatly decreased under the Kim Jong-un regime.

A reporting partner in Pyongyang mentioned that, “the government ordered the building of orphanages and for officials to clear all the kotchebi from the streets, and to shelter all of them there [the orphanages]. Rumor has it this was all because Comrade Kim Jong-un was angered at South Korean and Japanese TV programs who repeatedly broadcasted stories on the kotchebi.”
Related article: [Video Report] The hidden homeless of Pyongyang

Orphanages have been disguised and renamed to official kindergartens, primary schools, and a junior high schools. Many of them have been built all over North Korea.  The state-owned media has often featured them as, “a fruit of love given by General Kim Jong-un.” 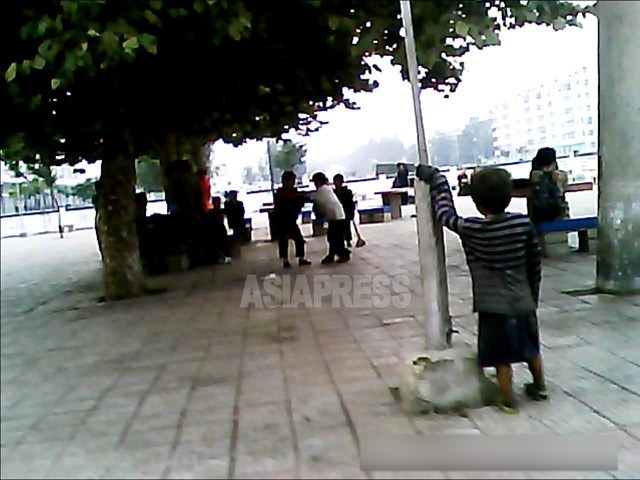 A boy wearing an oversized jacket meant for an adult in a city central. September 2013, in Pyongsong City, South Pyongan Province. Taken by ASIAPRESS. 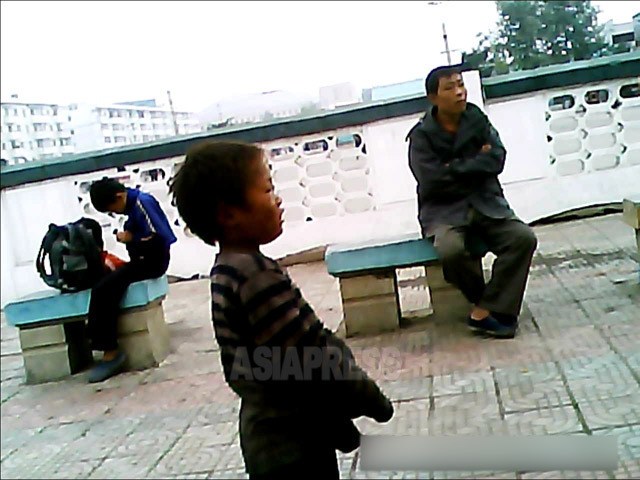 A boy has been crying hard. September 2013, in Pyongsong City, South Pyongan Province. Taken by ASIAPRESS.

“Aside from orphanages in Pyongyang which are used for propaganda, the government does not provide local orphanages with any food. Local administrative offices are forced to take charge of the orphanages.  Since local officers cannot pay for food out of their own pockets, ordinary people have to offer requisitions or pay bribes to opt out.  Some children escape from the orphanages due to the lack of food,” said a middle-manager at a local administrative office in South Pyongan Province.
Related article: ＜Inside N. Korea＞ Kotchebi, the Homeless, Under the Kim Jong-un Regime

All the pictures in this photo report were taken after Kim Jong-un took over power of the regime. (ISHIMARU Jiro) 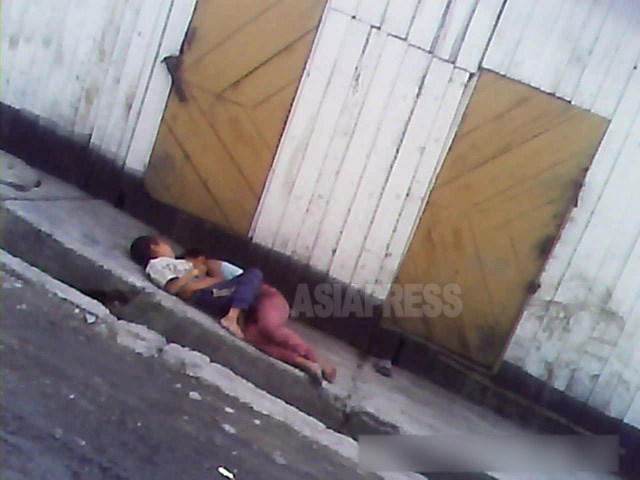 A girl and a boy–probably siblings–hugging each other while sleeping in front of a warehouse near a market. They are not wearing shoes. August 2013, in Hyesan City, Ryanggang Province. Taken by ASIAPRESS.

Facebook Twitter はてブ Pocket Feedly
RECOMMENDATIONS
[Video Report] Foot of N.Korean, Japanese Used Bike
◎ASIAPRESS rimjingang YOUTUBE playlistSadong District, where the video...
＜Inside N. Korea＞ The Kim Jong-un regime orders city dwellers to the farms to make up for lost time
The spread of COVID-19 in North Korea began in early May, right when f...
N.Korean Authorities Distribute Jang Song-taek "Purge List" to Local Officials
2014/January/28 Written by ISHIMARU JiroNotification issued that Party...
＜Inside N. Korea＞Authorities Concerned as Starving Soldiers Brazenly Attack Farms and Homes to Steal Food
In North Korea, the harvest of corn, which is the country's staple fo...
＜Inside N. Korea＞ Fear and Tension among the Police: Authorities Order the Eradication of Bribery With Threats of Punishing Officers and Their Families
The North Korean authorities have decided to strengthen punishments fo...
＜Inside N. Korea＞ ‘Made in Kaesong’ is North Korea’s hottest brand ... unauthorized operations continue at the Kaesong Industrial Complex
In February 2016, it was revealed that factories within the Kaesong In...