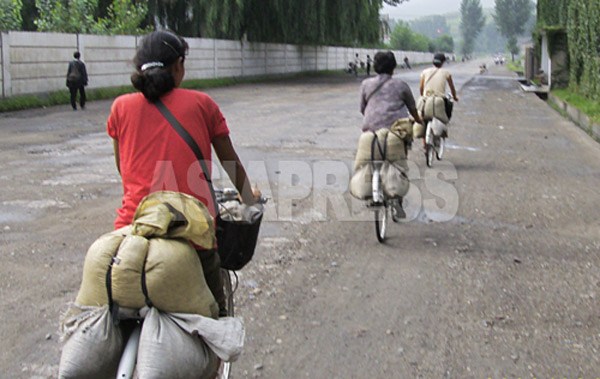 The “Taegori” ladies taking a shortcut by the bikes in an effort to evade the state security. They are carrying food from a rural place to a city. In August 2008 in a rural farm at a suburb of Pyongyang. Taken by Chang Jeong-gil (ASIAPRESS)

5 Social transformation caused by the expansion of the market economy

The rapid progression of the market economy considerably changed the social structure of North Korea.  The mindsets of the people show the progress the market has made.  Although North Korea has the whole population under strict control, the harshest in the world, the system has been weakened due to the development of market economy.

5-1 The end of the monopolized calorie, or the “governance based on the food supply”

I’ve already mentioned that the “governance based on the food supply” means that the state, prohibiting individuals to buy and sell food, has ultimate control of the food supply.  This implies a compulsory bond, “I feed you, so you must obey me.”

As of January 2016, the food supply has been accessible to only those whose royalty matters to the state such as workers at some privileged mines and military factories, soldiers, the police, high ranking officials, and Pyongyang citizens. I assume they are only 20-30% of the entire population in North Korea. Other people earn money by engaging themselves in market activities. [*Note 2] Related Article: ＜Inside N. Korea＞ Expansion of the market economy as the driving force behind social transformation–based on sources from inside North Korea. (PART1)

The end of “governance based on the food supply” made a lot of people leave their jobs.  Since they could not earn enough food and wages from their jobs, they needed to either engage in private businesses or sell their labor to earn cash and food.

Similar to the official wage of railway workers, workers in administrative departments, party members, the police, and also teachers earn only enough to buy one kg of corn at the market.  Those who work for public sectors need to work in the markets or they become involved in illegal activities such as bribery and corruption to earn hard cash. 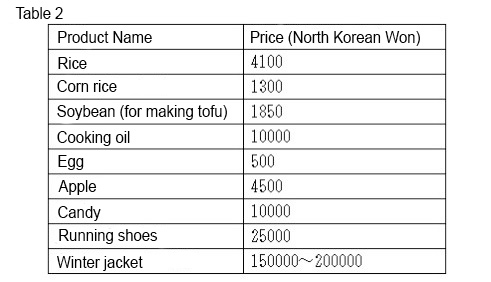 The market price at a general market in a North Hamkyung Province as of January 2016 based on our research.  The prices of food are per kg.

Only the price of the egg is per piece.  The exchange rate is 1 USD = 8,200 Won.
Next page:  How does the government react to people leaving their assigned jobs?

Next Page
1 2 3
Facebook Twitter はてブ Pocket Feedly
RECOMMENDATIONS
＜Inside N. Korea＞ Agricultural Materials in Short Supply as Farmers Predict Disastrous Harvest
With the sowing and planting season just around the corner, farming co...
＜Inside N. Korea＞N. Korea’s largest iron mine shutdowns, markets close, and controls intensify daily due to COVID-19 in N. Hamgyong Province’s Musan County
The situation in North Korea is changing by the day as the country’s a...
＜Inside N. Korea＞ Several Defectors Shot and Killed at Chinese Border: Poverty and Starvation Forces Residents to Choose Between Deadly Border Crossing or Suicide
As the Kim Jong-un regime has tightened its control over the country i...
＜N.Korea photo report＞A Look at North Korea's Impoverished Rural Women... Though they are producers they live in poverty due to exploitation
While North Koreans are very compassionate, there is one occupation th...
＜Interview with a North Korean Woman (1) ＞ Why the COVID Situation is Causing a Surge in “Black-Market Abortions”
The plight of North Korean residents is worsening. In order to block t...
＜Inside N.Korea＞ Is Economic Sanction Really Effective? Searching Effect from Retail Price Index
The UN Security Council adopted ‘Resolution 2270 (which sanctions Nort...