In order to prevent people from leaving their jobs, the government had imposed tight punishments such as detention and short-term forced labor. The government was afraid that one of the most important governing systems in North Korea, “associational life”, would lose its importance.  [*Note 3] [ Note: “associational life” will be explained in the next chapter]

However, officials of work places understand that it is necessary for the workers to join black market activities since there is no food supply or wages.  They started to charge money to those who would like to earn “time” for doing other business.  It was profitable and reasonable not only for the workers but the officials since the work places at that time had financial difficulties and a shortage of cash. So the workers could skip their jobs without being criticized by higher ups, but they would have to pay. 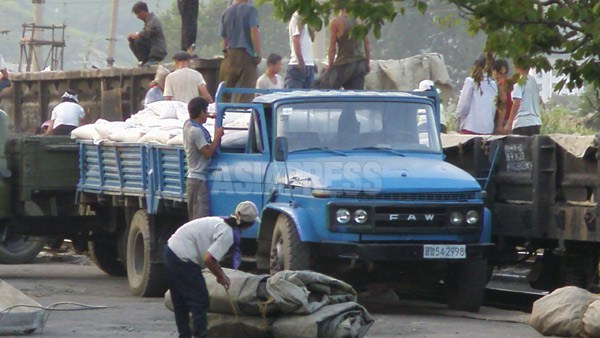 Transferring foreign aid, food, from the goods wagon to a truck. Those people are “freelancers” and are paid per piece. August 2008, in a suburb of Pyongyang. Taken by Chang Jeong-gil (ASIAPRESS)

Contrary to women, men are not allowed to open stalls at markets.  Therefore, they have to try to find a job which does not catch the eyes of state authorities.  There are various types of jobs, it is common for a man in a city to become a “Taegori,” carrying and selling for wholesaling things such as rice and agricultural products from farm to city.  Furthermore, privately-hired manual labor such as loading heavy baggage, working at construction sites, and also buying one’s own bicycle-drawn cart to carry things are all favored by male workers.  Due to the end of the “governance based on the food supply” and the inability of the Party to manage the workers, a number of “freelancers” have emerged.
Related Article: ＜Inside N. Korea＞ Market survey shows “Resolution 2270”, the toughest-ever sanctions, didn’t work

[*Note 2]: There are many cases in which joint ventures between North Korean and Chinese companies provided workers with a certain amount of food.  Also, the North Korean government orders some domestic factories and restaurants to obtain the raw materials and the financial resources for their operations by themselves.  Workers at such workplaces may find access to food.  However, it is not the traditional food supply, but just a benefit from collaborating with the black market. [*Note 3]: For up to a year, a “labor training camp” (rodong danryeondae) detains those who have committed minor crimes like violating the dress code and or leaving one’s job.  They are considered as a force to disrupt the social order and enforce a moral discipline.  The police can imprison citizens without even having a trial. 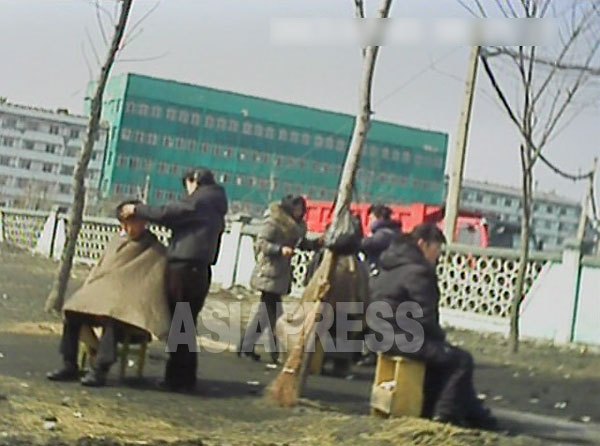 Barber stalls exist all over the country. In many cases, barbers used to work for state-owned companies but have quit due to the worsening economic condition. Now they are “freelancers.” March 2013 in South Pyongan Province. Taken byPaek Hyang (ASIAPRESS)

Next page: 5-2People leaving their jobs and disregarding the “associational life”

Next Page
1 2 3
Facebook Twitter はてブ Pocket Feedly
RECOMMENDATIONS
Student Smugglers: High-Schoolers Sneak into China to Smuggle and Steal for their Families’ Futures
With the Chinese border remaining sealed to block the spread of corona...
Truancy Increases In Northern Regions As Schools Demand More Money From Parents
2014/April/29Written by PAEK Chang-ryong, a defector reporterThe launc...
＜Inside N.Korea＞ North Operates Kaesung Industrial Complex Unlawfully
2018/Jan/29 It is reported that the North Korean government unlawfull...
＜Inside N. Korea＞ “Dead In Their Homes”: Possibility of Coronavirus Outbreak in Chongjin City amid Mounting Number of Untested, “Misdiagnosed” Patients
The Kim Jong-un regime, as of April 5, has continued to make claims of...
Stimulant Drugs Take Root in the Daily Lives of the N.Korean People (PART3)
2013/October/25 Written by LEE Jin-su<< PREVIOUS (PART 2) The Hi...
＜Inside N.Korea＞ Expansion of the market economy as the driving force behind social transformation--based on sources from inside N.Korea. (PART5) State-owned houses sold in the markets as the housing market established. by ISHIMARU Jiro
2016/Dec/26 4 Property transactions in the black markets  4-1 State-o...
＜Inside N. Korea＞ How do the North Korean people see President Moon? A Breaking Interview
How did the North Korean people react to President Moon Jae-in’s first...
＜Inside N. Korea＞ Distribution Distrust: Residents Wary of a Return to Rations after Huge Harvest Provides Potatoes to Whole Province
Amid news of poor rice and corn harvests across various parts of North...
＜Inside N. Korea＞ Homeless and Helpless: Residents Young and Old Beg as Population Fears a “Second Arduous March”
◆ People’s lives deteriorating as sanctions continue There is a growin...
＜Inside N. Korea＞ Regime Regulates Rice Prices as Pyongyang Residents Fear Inflation Rather Than Coronavirus
The Kim Jong-un regime’s decision to block the Chinese border to preve...