5-2 People leaving their jobs and disregarding the “associational life”

For every North Korean the “associational life” starts from the time they join the “Young Pioneer Corps,” in the fourth grade. Their associations then change as they grow older and enter the work place, the “Inminban (Neighbor Watch Group),” the military, etcetera. People must join an association and undergo various types of volunteering work and political indoctrinations, and they must attend events.  In their respective associations, one must participate in a weekly “self-criticism” session, a meeting during which participants are required to criticize oneself and each other’s shortcomings, in order to show the loyalty to the leader and the Party.  These associations also have a function that serves as a sort of mutual surveillance.
Related Article: [Video Report] National bus network of the North Korean market economy

“Governance based on the food supply” did not only play a pivotal role of the planned economy but it was also an effective tool to control the people in North Korea. Places of work, where people produce food and goods, were also places for the “associational life” in which the people must be obedient to the ideology and the policies of the Party. Political indoctrination takes place in every organization, and the workers have no choice but to participate.  They need to be loyal to the words and the policies from Kim Il-sung and Kim Jong-il.  However, the role of places of work to control the people has been weakened since the number of people leaving their assigned jobs to go start businesses has increased. 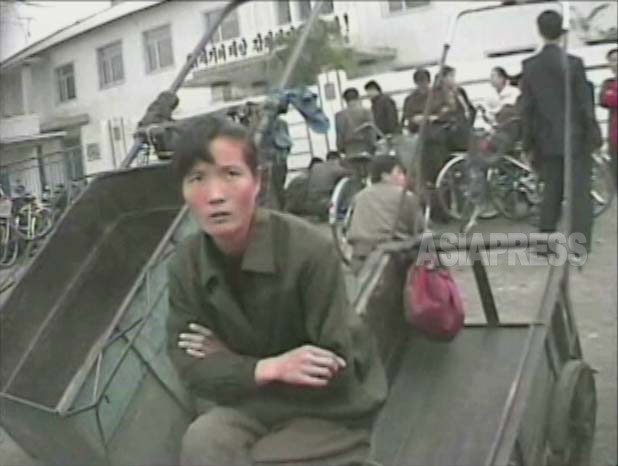 A lady with a Bicycle-drawn cart waiting for a passenger near a market. Business owners sometimes hire a few workers. They are not working under the control of the Party. October 2008 in Sariwon, North Hwanghae Province. Taken by Shim Ui-cheon (ASIAPRESS)

The number of capitalistic entities, financially self-supporting, has also increased, which has resulted in the end of the “associational life.”  As mentioned above about the traffic situation, private companies operate under the name of state authorities such as the military, the police, and the Party since they are “not allowed” to exist.  They are called “basements.” They are for-profit organizations that have emerged and developed due to the collapse of the planned economy. The number of “Tonchus” running “basements” sanctified under the authorities has been increasing.

In North Korea all work places must have an organization operating under the Party and hold weekly “self-criticism” session—so do “basement” operations. But in “basements” the sessions are much less strict as compared to that of state-owned companies.  Reportedly, some members of the Party pay bribes in order to evade such sessions.  [Note: This is according to testimonies from our reporting partners inside North Korea, such as the one who reported on the small-scale coal mining industry, a “basement” operation, in September 2011.]

Those who start businesses, “freelancers” at a market for example, increase the self-supporting entities which means the economy is getting more out of the Party’s hands.  The ideology and the policies that the Party intends to enforce have become much less influential than before. [To be continued in part 7]

【Related Article】
◆ [Video Report] A rare glimpse of ‘No. 10 Checkpoints’ set up by the State Security Department
◆ Delinquent Juveniles Mobilized For Forced Labor
◆ [Video Report] Back alley of Pyongyang: Never let foreigners go. Residents of central Pyongyang live on businesses in the market