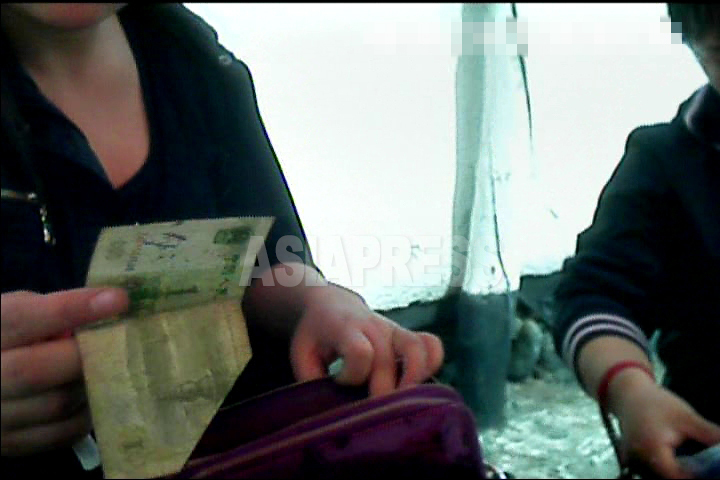 (Photo) A woman hands over a 1 won note in change. Of course, one can shop using Chinese yuan. Photographed in Hyesan City, Ryanggang Province in October, 2013 (ASIAPRESS)

◆ All prices calculated in RMB

Q. Is there a difference in price when paying for something in RMB or North Korean won?

Q. When you receive North Korean won, do you exchange it immediately for RMB?

A. If you are conducting business in North Korean won, you can get your payments exchanged immediately or you can wait to convert it all at once afterwards. In the evenings, the currency traders go around the stalls and ask vendors if they want to convert their day’s earnings.

Q. What makes the RMB so convenient?

A. RMB is convenient because it does not get too bulky, even if the amount is large. These days, even when a company receives products, everything is listed in RMB, so all prices are calculated in RMB Everyone wants to have things in RMB so as to not be confused by the exchange rate.

※ Currency Exchange: On November 30, 2009, the North Korean government unexpectedly announced its decision to reform its currency, suddenly cutting the North Korean won to one-hundredth of its value. The people had only a week to exchange their money for the new currency, at a limit of 100,000 won at a time, before the money would become worthless. In the panic, there were many who suffered heavy losses to their savings.

◆ Our country can’t survive on its own, so we depend on Chinese money

Q. Do you think the RMB is more safe?

A. Definitely. China is a bigger country than ours and there will never be a sudden “currency reform”. Our country is under economic sanctions, so we don’t know what will happen to the currency value or when. Rich people are saving up US dollars and spending RMB.

Q. What do you think about spending Chinese money as a North Korean? Are you not discontented with your country?

A. Our pride is hurt. Honestly, because our country is incompetent. We depend on Chinese money. Our country is like China, just speaking Korean. We’re using Chinese money to buy Chinese products. Without China, our country would be at a loss. The government says we are ‘self-reliant’ but there are no results whatsoever.