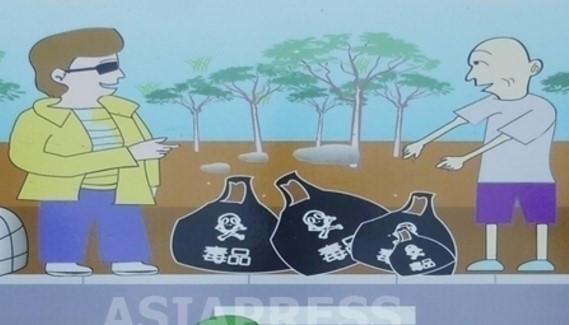 As North Korean exports to China have faced great difficulties due to U.N. Security Council sanctions, smuggling of banned goods has been on the rise along the Yalu river. However, this increased border traffic led to an unfortunate incident in November, when a Chinese broker died in a car accident on the N. Korean side of the border.

A reporting partner in Ryanggang Province claimed the accident occurred around November 16, when the Chinese broker’s car skidded and overturned on the icy road leading to the rendezvous point. A passenger in the vehicle was injured and taken to hospital, while the broker’s body was recovered and repatriated to China.

■ Smuggling in overdrive as river freezes over

It turns out the Chinese broker had been in North Korea to invest in minerals. Since last month, the North Korean authorities have been actively promoting the smuggling of minerals such as copper and molybdenum. Large trucks carrying tonnes of ore can cross the river in winter, when the Yalu completely freezes.

The reporting partner explained that Chinese investors and smuggling brokers visit North Korea often and delved further into the connection between rising smuggling and the accident, saying, “The dead broker was a Chinese woman. She came across to discuss investment in copper and molybdenum ore production and the necessary smuggling procedures. It seems that the incident occurred while the brokers were on their way to Sinpa County, the smuggling point, with Ryanggang Trade Bureau officials.

The upper reaches of the Yalu River are most popular for smuggling along the N. Korean-Chinese border because the river there is most narrow. Usually, the river freezes in mid-December, allowing large trucks to cross over without difficulty.

On the North Korean side, trading companies are responsible for smuggling operations under the approval of the administrative Trade Bureau. Locals call it “national smuggling” because all operations are supervised by customs officials and secret police. The Chinese receivers, meanwhile, are always from private companies. The hot spot for smuggling, Sinpa, is located 10km downstream of Hyesan, the main city of Ryanggang Province.

According to the reporting partner, though Chinese authorities are trying to crack down on smuggling, powerful Chinese traders are finding gaps by gaining information from border guards. The traders, for now, are coming out on top, with large trucks crossing the border nightly to transport hundreds of tonnes of minerals as well as containers full of squid caught in the East Sea. (Kang Ji-won)

Facebook Twitter はてブ Pocket Feedly
RECOMMENDATIONS
＜Inside N. Korea＞ Would a visit by the Pope bring freedom of religion to North Korea, a country where even fortune-telling is illegal?
In early October, an unusual public event took place in Hyesan, North ...
[Video Report] North Koreans Forced To Provide Labor
Citizen mobilization in North Korea doesn’t only mean mobilization in ...
Kim Jong-un's Starving Soldiers - "Just a spoonful of oil for me..." A soldier pleads for grace
2014/January/24 Written by PAEK Chang-ryong, a defector reporter."Just...
[Video Report] There is no water! N.Korean People's 'Water War' because of water shortage
◎ASIAPRESS rimjingang YOUTUBE playlistA village in South Hwanghae prov...
Optimism in North Korea: As Poverty Spreads Residents Start to Play Down the Pandemic…"COVID is like the common cold" and "Eating garlic will keep us safe"
While the North Korean authorities advertise that they are maintainin...
＜Kim Jong-un＞ Humiliating 'note-taking scene’ during Kim Jong-un’s visit repeatedly broadcasted in China, edited out in North Korea
Kim Jong-un visited China from January 7 to 10 for a fourth summit mee...
[Video Report] Why Do N.Korean Women Care About Looks? "I want to get attention from the guys.”
The first scene of the video was filmed in Wonsan City, Kangwon Provin...
＜Inside N. Korea＞ Kimchi Immunity?: Residents Latch onto Coronavirus Rumors as Understaffed Hospitals Start Screening Patients Over the Phone
◆ A firsthand look at the hospitals As of March 22, the North Korean g...
Rising discontent as control reinforced to prepare the 7th Workers Party Conference in May… Forced labor to the runaways from their work places and coerced savings to banks…
Declaring nationwide 70 days battle (*1) to prepare the Workers’ Party...
〈Photo Report 3〉Widening Gaps - The Privileged Enjoy a Luxurious Life And the Homeless Suffer Harsh Days
2011/December/15 Report by Gu Gwang-ho (June, 2011) Our country's TV n...