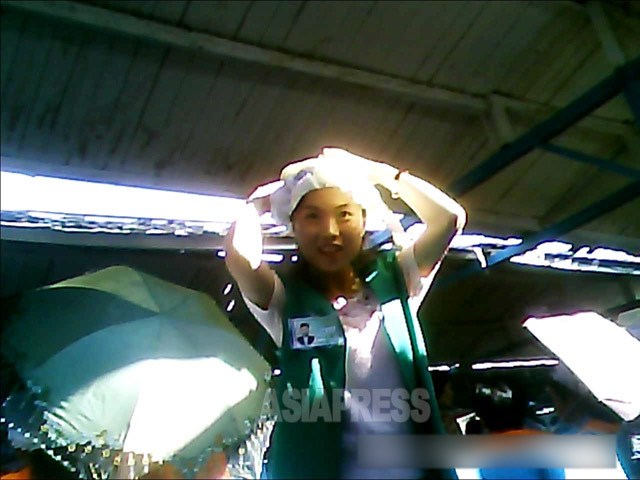 A woman sells various items, such as soap and detergent, in a market in northern Hyesan. Almost all transactions are said to be conducted in RMB. Photograph taken in August, 2013 by ASIAPRESS

“Our nation’s banknotes are being totally neglected...”

With Kim Jong-un’s words of criticism, a crackdown seems to have been initiated nationwide. The following was reported on November 21 by a reporting partner living in North Hamkyung Province:

“Kim Jong-un’s words of criticism were passed down through the inminban (local political units) in early November. The complaint was that, while foreign money is being treated with great importance by the people and at markets, North Korean money is being neglected. We were told to end this practice.”

According to the reporting partner, a member of the Workers’ Party, Pyongyang’s central bank had reported to Kim Jong-un that a large number of deposited banknotes were damaged and in tatters, prompting Kim Jong-un to criticize the public.

Immediately after, Kim Jong-un’s orders were executed. From now on, when exchanging damaged bills at banks, citizens must explain in detail why the banknotes were damaged and, depending on the extent of the damage, may not be able to exchange the bills.

There is, however, a reason why North Korean people treat their country’s banknotes with such little care. The reporting partner explained as follows:

“These days, almost everyone is dependent on the RMB or US dollar and purposely avoids using the risky North Korean bills. We can only use the North Korean bills when paying for items related to the national plan, with no other opportunity to use the money. Now, even the open-air tofu vendors are charging in RMB for a single block of tofu.”
Next page :Impossible to survive off the North Korean won...

Next Page： ◆ Impossible to survive off the North Korean won
1 2
Facebook Twitter はてブ Pocket Feedly
RECOMMENDATIONS
＜Inside N.Korea＞ Alert for Drone! Ammunition Distributed to Shoot Down!
2017/Mar/24 The North Korean government is said to start a joint dril...
＜Inside N. Korea＞ Markets in Turmoil Across the Country: Households Register to Receive Chinese Aid and Trade Grinds to Halt as Food Prices Hit Yearly High
Turmoil is spreading in markets across North Korea. The prices of sta...
＜Inside N. Korea＞ Guilty Party: Regime Conceals Spending From Starving Citizens While Touting Weapon Tests to Officials
◆ “Kim Jong-un resisted the U.S.-ROK joint military exercises with cou...
＜Interview with N.Korean People＞ Defection of Thae Yong-ho, the minister at NK mission in London, is “natural”
ASIA PRESS, amid of flow of news from South Korean media, covering th...
Kim Jong-un Loses of Weight… But North Korean People Are Indifferent
I visited South Korea for a month from the end of August. It has been...
＜Inside N. Korea＞ The Great Annoyance of Kim Jong-un's Visit to Samjiyon: Residents Forbidden to Step Out for Several Days
On November 16, Kim Jong-un visited Samjiyon in northern Ryanggang Pro...