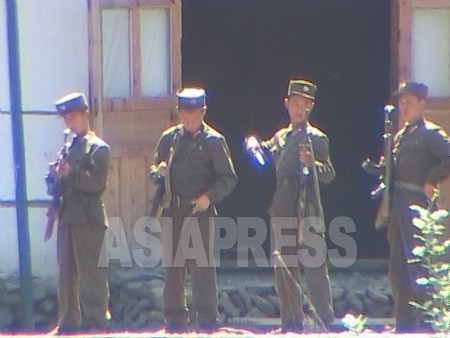 Border guards are on the lookout for smuggling and defection. Border guards checking their equipment prior to their rotation. Taken on August 2004 at Chinese side of upper Tumen River. (ASIAPRESS)

The incident happened in Inkye-Ri, Hoeryong City, near the Tumen River. The reporter said that a group of four terrorists from South Korea were captured.

According to his report, rumors are spreading rapidly about the incident. An advisory officer of the Border Security Forces told him directly, “The head of the group who was under surveillance by the National security Agency is a defector to South Korea and the rest are Chinese. All of them were arrested and brought to the State Security Department (secret police) office in North Hamkyung Province.” He missed the opportunity to catch them in his territory: “The government would have given a hefty reward and the opportunity to become a Worker’s Party member to those who captured the terrorists.” 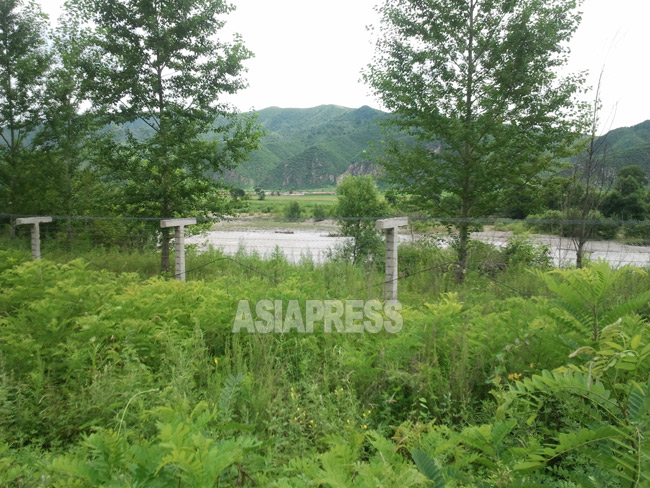 Inkye-Ri area where the incident occurred. A barbed wire fence makes it a difficult location to cross the border. Taken by ASIAPRESS on August 2012.

May be a self made intrigue..

The incident seems far fetched given that the border between China and North Korea is so heavily guarded on both sides and it would be extremely difficult for anyone to carry out such clandestine operations. Even if an individual succeeded in crossing into North Korea, it is almost impossible to move around freely inside the country. It is hardly difficult to even conceive of a Chinese person crossing the border to carry out a terror operation.

Agents may have indeed tried to cross the border illegally for smuggling, however, the authorities may have fabricated the incident as ‘outside forces including South Korea are trying to plot terror or secret operations against North Korea.’ The North Korean government is moving to reinforce the control over its citizenry, provoke hostility toward South Korea, and foster fear towards the outside world for the purpose of encouraging internal solidarity before the Party conference in May.

The incident implies that the authorities aim to reinforce control over people near the border area. The reporting partner said, “rumors are spreading, but there has been no official announcement yet.”

At the end of last month, the State Security Department held a public rally on the subject, “The family of defectors to South Korea shall be exterminated up to three generations.”

Facebook Twitter はてブ Pocket Feedly
RECOMMENDATIONS
Secondhand Bookstalls Still Active in N.Korea
The Daily Life of North Koreans:  2014/March/15 Written by PAEK Chang-...
＜Inside N. Korea＞ Hunger hits the countryside ... the rise of 'hungry households' confounds authorities
◆Agricultural producers are starving 'Hungry households' is what they ...
＜Inside N. Korea＞ Growing Radicalization of People's Control (2): The Return of "Word Hunting"…One Word of Complaint Can Result in Arrest or Banishment
In North Korea, there are strong indications that "word hunting" is b...
Jang Song-thaek enraged Kim Jong-un: Reason of Purge found on Photos (part2) Jang Song-thaek was executed for the violation of the sole leadership system
Analysis of North Korean Media ISHIMARU Jiro, editor of Rimjin-gang, P...
From The Editor
To the Readers of the English Edition of Rimjin-gang : ISHIMARU Jiro (...
＜Farm investigation＞ Poor Harvest Predicted Already: 30% of Farms are Being Worked by "Food Insecure Households"
Now, North Korea is amid a "rural mobilization". Since mid-May, city d...