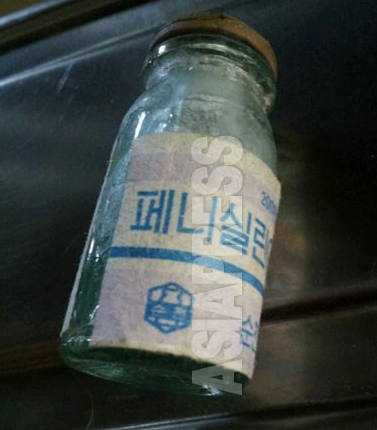 (Photo) Penicillin is produced in North Korea, which is in short supply, and there is a large amount of fake medicine on the market. Photographed by ASIAPRESS in April 2015.

Since October, when the weather becomes colder in North Korea, the number of infants dying from illnesses has increased. Imports of medicines from China have been stagnant since last year, and hospitals and health institutions are almost out of supplies and unable to treat patients. "The situation is serious," several reporting partners in the northern region told us at the end of October. Although the authorities have been alerted to the situation, they cannot help due to the shortage of medicine (Kang Ji-won / ISHIMARU Jiro).

Our reporting partner in Ryanggang Province described the local situation thusly, "Three children died in my neighbourhood in the course of one week at the end of October. I found out that they were two boys and a girl, ages 3, 2, and 1. The deaths were due to whooping cough, influenza, and tuberculosis. With no medicines or vaccinations, old people and children are dying quickly from colds and diarrhoea."

◆ No saline solution in hospitals

The Kim Jong-un regime has severely restricted trade since February 2020 to block the influx of the coronavirus, and medicines have stopped coming in from China. In the spring, supplies became scarce and prices on the black-market skyrocketed. In the summer, most drugs disappeared from hospitals in provincial cities, leading to many deaths among the elderly.

The embassy of Russia to the DPRK has instructed many of its staff to leave the country since the beginning of this year, saying on its Facebook page that the reason is "a serious shortage of necessities, including medicine."

Another reporting partner in Ryanggang Province explained the situation of hospitals as follows. "There are no medicines in hospitals or pharmacies at this time. Not even saline solution. The medicines sold at black markets are costly. Although hospital visits are usually free of charge, doctors tell you to either 'take medicine, get acupuncture treatment, or try folk remedies.' Sometimes domestic medicines are available, but the quality and efficacy are poor, and there are many fake medicines, so they cannot be trusted. Even if a child gets sick, there is nothing parents can do to help."

The economic downturn has drastically reduced the cash income of most people. As their nutritional intake has deteriorated and their immunity lowered, more and more people are suffering from colds, flu, typhoid, and tuberculosis.

The number of infant deaths has increased, and the authorities are becoming concerned.

“People's units and schools are receiving lectures on hygiene from public health centers and hospitals. However, the lectures are not very useful, as they only teach people how to prevent colds or drink water after boiling it. Therefore, parents with children are still worried."

The North Korean government has consistently refused to accept medical supplies from international organizations. This is because of the possibility of the coronavirus being carried on them (only aid from China and Russia has been accepted).

Finally, in October, the government allowed the WHO (World Health Organization) and other UN agencies to bring in relief supplies, although they were mainly coronavirus-related supplies.

On the other hand, North Korea has not halted all trade. According to trade statistics released monthly by the General Administration of the Customs People's Republic of China, North Korea's top import in September was cigarettes at $6,955,884. As for medicines, although the details are unclear, $3,858,369 was imported in the category of “mixed or unmixed products, medicines in measured doses or retail packages.”

The Kim Jong-un regime has lost its ability to protect its people. It has no apparent will to provide its people with vital public goods such as adequate nutrition, sanitation, health care, drinking water, and electricity. Health care is in a state of collapse. North Korea could certainly be classified internationally as a "fragile state."

※ ASIAPRESS contacts its reporting partners in North Korea through smuggled Chinese mobile phones.
※ A part of the article was corrected on November 7, 2021, at 5:10 am.
※ Corrections: November 10, 2021, 11:45 a.m.
The article stated that the import value of cigarettes in September was $2,105,253, but it was an error of $6,955,884. Also, although details are unclear regarding the importation of medicines, there was an importation of $3,858,369 for the item "medicines in mixed or unmixed products, measured doses or retail packages". Both of these statistics were mistaken for those of other months. The correction has been made.

＜Related Article＞
Facebook Twitter はてブ Pocket Feedly
RECOMMENDATIONS
＜Interview from Inside N. Korea＞ People are afraid of starvation if cities are locked down…PCR tests don’t exist…ASIAPRESS interviews a N. Korean to better understand the situation in the country and how people are feeling
North Korean state-run media has been reporting that the number of pe...
＜Inside N. Korea＞ 'Crowd trials' carried out nationwide
2018/Jul/19 It has been reported that "crowd trials" (public trials),...
The Spread of "Impure Recordings" Lead to Executions in Hyesan and Chongjin City
2013/Dec/05 Written by ISHIMARU Jiro Across North Korea, from the end ...
＜Inside North Korea＞ Kim Jong-un Regime Works Hard to Conceal Sanctions
“A number of nations have joined the economic and diplomatic sanction...
＜Inside N. Korea＞ Drug Trade: Addicts and Traffickers Turn to Opium as Methamphetamine Prices Skyrocket Due to Border Blockade
The price of methamphetamine trafficking has skyrocketed in North Kore...
＜N. Korea Pro Report (Part 1)＞ How is North Korea’s Economy Faring in the Face of the Coronavirus Pandemic and Continued Sanctions?
Due to the chaos caused by the global spread of COVID-19, the issue of...