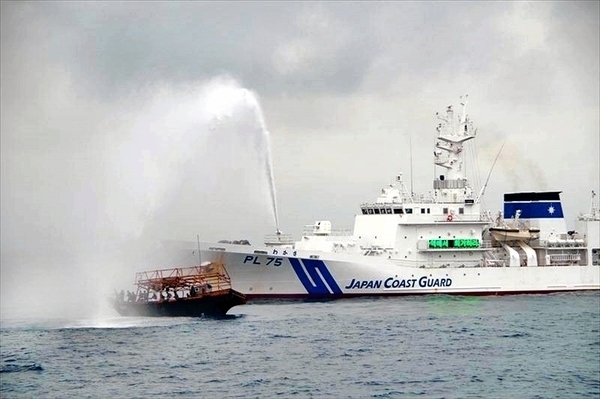 Wooden boats from North Korea have been washing ashore in Japan. ASIAPRESS asks what is behind these ghost ships. (ISHIMARU Jiro)

Many of North Korea’s ghost ships wash ashore as wrecks, but the ships found in Akita and Hokkaido are in good condition, with drying racks still erected on deck. Similar ships were found by the Japan Coast Guard near Yamatodai, in July, squid still hanging on the racks.

Squid season in North Korean waters is twice a year, June-July and October-November. Squid caught during this time are usually exported to China or consumed by North Koreans able to afford them. While it is not certain that the ghost ships are squid boats, it is a fair assumption to make, as they were found deep in Yamatodai, a well known autumn fishing ground. 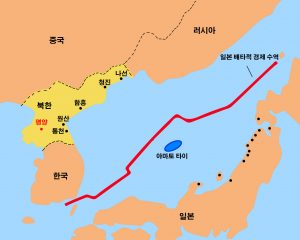 *Is the military doing  fishing?

One of the ships found drifting off Matsumae, Hokkaido had the sign, “854 Troop of the Korean People’s Army,” attached to the side. This has contributed to pundits incorrectly speculating that the DPRK military is fishing in Japanese waters. ASIAPRESS explains that there are two means by which the DPRK military engages in business practices:

In the 1990s the Kim Jong-il regime faced an economic meltdown. The state struggled to provide even basic supplies to the Korean People’s Army, consequently, the military were ordered to procure their own food, clothes and daily necessities. As the military was also in need of capital and one of its sub-organizations, the department of munitions, also known as the “Logistics Office,” started a fishing business. They outsourced the task of fishing to civilians on the proviso that earnings from each catch would go to procuring military necessities and providing for soldiers. Kang Ji-won, a defector with knowledge about the fisheries industry in North Korea and its connection to the military explained, “The fishermen are mostly civilians, but some are civilian employees of the military and carry out miscellaneous tasks while on board.”

The other way by which the military engages in business is through North Korea’s new rich, known as “Donju.” Donju obtain military signage from the Korean People’s Army and use this state recognition as a platform for commercial fishing. Officially, private enterprises do not exist in North Korea and Donju’s strategy is a means of getting around this prohibition by doing business under a powerful organization like the Labor Party or the military. They must pay for the signage, of course. This kind of profit-seeking new company is called a “Base.” The head of the company is known as the, “Head of Base.”

Donju conduct commercial enterprise in the name of the military and their fishing vessels can pass North Korean coast guard checkpoints without difficulty. 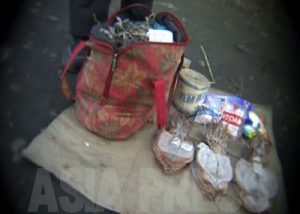 Squid for sale on the street. Taken by Lee Song-hee, Sadong District of Pyongyang in December 2008. (ASIAPRESS)

“The fishing base,” built by Donju capital, provides fishing vessels, fishing equipment, and fuel, but hires civilians to man each vessel. A reporting partner in North Hamkyung Province reported in late November, “Young men are eager to join these fishing crews because it’s hard for them to find paid employment.”

A relative of the reporter got a job on a fishing boat. What’s the pay like?

“I heard that the catch is divided 6:4, between the owner of the vessel and the crew. 15kg of rice per month is distributed to the crew.” While the captain and the chief engineer know how to sail and navigate, the crew has no knowledge about the sea. It is extremely dangerous to sail in deep waters using such a small vessel, but the catch promises a valuable income, it’s possible to earn several hundred dollars in just one sailing.

*Effect of the economic sanctions?

Some commentators have speculated that the wreckages washing up on Japanese shores are the result of excessive North Korean fishing to overcome the food shortages, the result of the economic sanctions. In reality, however, food items are traded in large volume in markets across North Korea. The price of rice and corn recently hit a low point for 2017, due to the completion of the annual harvest. Seafood is not a substitute for every day staples. It doesn’t make sense to eat the fish as a source of calories, caught using valuable fuel. Catching squid is purely for economic gain, not to feed hungry people.

The ripple effect of international economic sanctions is impacting on the cost of fuel in North Korea, causing a sharp rise in prices. The North Korean government began to control the supply of fuel from April, as it anticipated the decrease of foreign earnings and the sanctions on the oil imports, which in turn prompted a doubling in the cost of gasoline and diesel. “As the fuel prices increased sharply, they use fuel mixed with low quality oil for sailing. It causes a lot of engine troubles,” our reporting partner explained.

Two squid seasons a year offer opportunities to make money for even the small fishing bases and the crew on board.

The reporting partner in Yanggang Province explained: Squid is expensive this year because of the poor catch. Even though trading companies don’t buy the squid, the price is still high. The price per a kg used to be 30 Chinese Yuan (KRW 4,900), this increased to CNY40 (KRW 6,500). Squid can be easily preserved and smuggled because its lightweight. Are they trying to smuggle squid to meet the demands of Chinese consumers as we approach the Lunar New Year?

Drifting North Korean fishing vessels are not spy ships. They are fishing boats from the “Fishing Bases” who are willing to risk ship and crew each season in a bid to get-rich-quick.

Facebook Twitter はてブ Pocket Feedly
RECOMMENDATIONS
N. Korean TV pixelates the image of the protest against Park Geun-hye. What do they want to hide?
Korean Central Television, a state-owned television service in North ...
＜Inside N. Korea＞Death Toll Rising: The Serious Humanitarian Crisis in North Korea is a Man-made Disaster. ISHIMARU Jiro
People are dying. People are dying for lack of food and medicine. Thi...
Heavy Restrictions Continues - People's Discontent Pervades
2014/January/08) Written by PAEK Chang-ryong, a defector reporter.It i...
[Video Report] A rare glimpse of ‘No. 10 Checkpoints’ set up by the State Security Department
The reality in North Korea is that citizens are not allowed to move fr...
＜Inside N. Korea＞ Boiling Point: Frustration With Regime Grows amid Rising Rumors of Sanctions Relief
◆ Increasing demand for an end to Chinese and Russian sanctions Rumors...
● Media Reviews
2014/Nov(UK) The Rory Peck Awards The Finalist Feature Winner 2014 201...