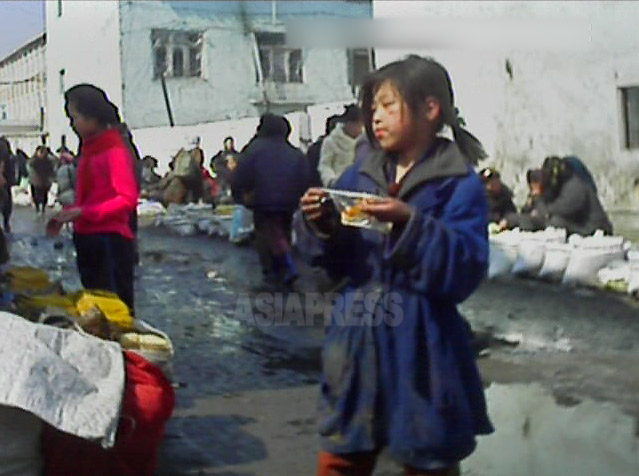 A young kochebi girl is staring at food at an open-air market. She holds a plastic bag with some food in her hand. Photographed in Pyongsong, South Pyongan Province, March 2013 by ASIAPRESS.

The population of vagrants, known as "kochebi," has been on the rise in urban areas of North Korea. Our reporting partners in the northern region have been investigating and reporting the situation since April (Kang Ji-won).

The number of "kochebi" is increasing not because of lack of food but because their cash income has plummeted to the point where they can no longer sustain themselves.

Since the end of January 2020, the Kim Jong-un regime has blocked the Chinese border to prevent the influx of the coronavirus. It has also imposed substantial restrictions on movement within the country, resulting in a significant slowdown in production and a reduction in the flow of people and goods. As a result, many people have lost their cash income due to businesses going under and being laid off. The following is the report of our reporting partner living in Ryanggang Province.

◆Older women and girls begging in the market

"There has been an increase in the number of "kochebi," from young children to the elderly, in markets and in front of train stations. The older people are especially miserable. I've seen people get so weak from lack of food that they fall asleep and die in the market.

Many are children whose parents have sold their homes or abandoned them due to hardship. Some of the children in their mid-teens snatch belongings and pickpocket in the market. Although the authorities are trying to find their parents to support them, it is difficult, and even if they can find them, the parents cannot afford to take them in, so the authorities have no idea what to do."

It is the rising number of female "kochebi" that concerns me. Many of them are taken away and sexually abused, believing that they will be fed. However, the reality is that there are no measures in place to protect girls. 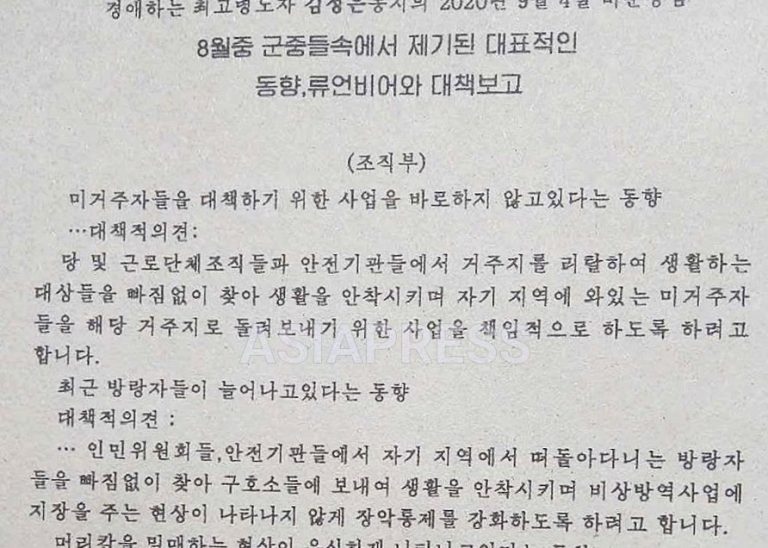 An internal Wokers' Party of Korea document issued in August that we obtained (Photographed by ASIAPRESS).

◆The government has ordered detentions but to little effect

Our reporting partner heard from a couple of "kochebi" he saw at the market.

"They were 12 and 9 years old. The older one had no shoes and had a cloth wrapped around his foot, and something like water was dripping from it. What's wrong? I asked. He said he got frostbite during the winter."

Recently, I've noticed the appearance of young people in their 20's and 30's living as vagrants.

The authorities are no longer able to ignore the increasing number of "kochebi". An internal Labor Party document issued in August last year, obtained by ASIAPRESS, is headlined "The Recent Trend of Increased Vagrancy" and describes the following measures to be taken:

"The people's committee (local government) and security organs (police and other public security organizations) will catch all vagrants wandering in their areas, send vagrants to relief centres to be looked after, and strengthen controls to prevent the emergence of phenomena that may hinder emergency quarantine projects." ※ The information in () has been added by the ASIAPRESS writer.

What are the recent developments of the authorities? Our reporting partner explains as follows:

"In Hyesan City, children are caught in the market every day to be housed in existing orphanages and vacant inns. However, they soon run away because they don't get proper food, and then they go back to the market to beg and steal."

＜Related Article＞
Facebook Twitter はてブ Pocket Feedly
RECOMMENDATIONS
＜Inside N. Korea＞ Nationwide Warning Issued After Electric Bike Battery Explodes, Killing Family of 3 in Pyongyang
An electric bicycle battery exploded while being charged in a Pyongyan...
＜Inside N. Korea＞ Order to Abolish All "Hidden Fields": Farmers Fear Starvation as Ban Begins
The North Korean authorities have ordered the abolition of all privat...
＜Inside N. Korea＞ Plummeting Won Causes Market Panic: Authorities Crack Down on Black Market Money Changers Amid Fears of Inflation
As the real exchange rate of the Chinese RMB and the USD continues to...
＜Inside N. Korea＞ Several Defectors Shot and Killed at Chinese Border: Poverty and Starvation Forces Residents to Choose Between Deadly Border Crossing or Suicide
As the Kim Jong-un regime has tightened its control over the country i...
＜Inside N. Korea＞ State of Emergency Ordered Following Coronavirus Outbreak in China…Night Curfew and Strict Quarantine Measures Reinstated and Construction at the Border Brought to a Halt
In response to the expanding coronavirus infection in Jilin Province, ...
Kim Jong-nam: Image of Nice Guy Created by Media
2017/Feb/27 On the late night of February 17, the following day of th...
The Execution of Police Officers in November, Pyongyang - Possibly a Proactive Step towards the Purge of Jang Song-taek
2013/December/13  Written by KANG Ji-won, PAEK Chang-ryongDozens of Po...
＜Inside N. Korea＞ Held Tongues, Tied Hands: Officials Concerned as Rising Anti-U.S. Sentiment Creates Obstacle for Negotiations
◆ “Do not compromise with the U.S.” - is public opinion threatening th...
cover page
cover page               Rimjin-gang - News From Inside North Kore...
＜Inside N. Korea＞ Missing Medicine: Country on Verge of "Medical System Collapse" due to Rapid Depletion and Blocked Imports of Drugs
◆In addition to the depletion of Chinese products, there is a ban on a...