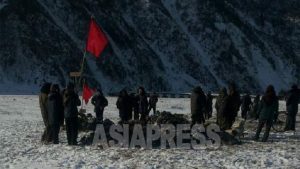 Women mobilized for “struggle to collect compost” at the very beginning of the year. Taken by ASIAPRESS.

At the beginning of 2017, AISAPRESS reporting partners have sent me New Year’s reports one after another.  We exchanged congratulatory messages on the New Year: “Best of luck in the coming year.”  However, they seemed to be feeling down.

Although people were given New Year’s Day off, farmers have been mobilized for “struggle to collect compost” since as early as the third of January.  Also, people have started to study the Kim Jong-un’s “New Year Address for 2017”, the annual New Year’s speech.  For North Koreans, New Year’s Day is the beginning of a gloomy year.

The New Year address contains a review of the previous year as well as visions of the coming year.  However, they are not very meaningful.  The address usually mentions “creating a new history of great prosperity”– self-praise, and presents a list of all the “greedy” goals as well.  The overall contents of this year's New Year address are as follows:

Unconventionally, Kim Jong-un also showed an expression of regret in the address, which I will discuss later.

--Did you watch the Kim Jong-un’s New Year address on TV?

A: “In the first place, I could not turn on the TV due to the power shortage.  I could not watch the speech on the New Year’s Day.  I had to start work from the third of January.  In my workplace, we had a meeting to study the contents of the speech and also held a kick-off meeting to implement the address thoroughly.  In a rural area, people have been mobilized for collecting compost.”

--How did people react to the New Year address?

A: “Everyone is indifferent to the speech because nothing in his/her life has been improved so far, regardless of the annual speech.  A person said that “Kim Jong-un aims to complete the development of ballistic missiles, but I don’t know how useful they are.”

After learning the contents of the speech, my coworkers made fun of the address.  They said, “The speech only carries Kim Jong-un’s heart since he has nothing else to give (people) even on the New Year’s Day (meaning to say, the speech is just a formality).”  However, we can only say and giggle like that among people close to us as we might be a target for surveillance by the state security agency if we were not careful about our saying.

Now, the New Year address for 2017 had an unusual “special feature.”  At the later part of the speech, he made a self-criticism.  The quote from the Korean Central News Agency is as follows:

As I am standing here to proclaim the beginning of another year, I feel a surge of anxiety about what I should do to hold our people in greater reverence, the best people in the world who have warmly supported me with a single mind out of their firm trust in me.

My desires were burning all the time, but I spent the past year feeling anxious and remorseful for the lack of my ability. I am hardening my resolve to seek more tasks for the sake of the people this year and make redoubled, devoted efforts to this end.

Previously, all the people used to sing the song “We Are the Happiest in the World,” feeling optimistic about the future with confidence in the great Comrades Kim Il Sung and Kim Jong Il. I will work with devotion to ensure that the past era does not remain as a moment in history but is re-presented in the present era. On this first morning of the new year I swear to become a true servant loyal to our people who faithfully supports them with a pure conscience.”

[New Year address made by Kim Jong-un, published by the Korean Central News Agency on the first of January 2017(English)]

In North Korea, there is a “principle of a leader as inerrancy.”  Kim Jong-il and Kim Jong-un have never been criticized by any media.  It is “impossible” for them to make a mistake.  Instead, high-ranking officials are always responsible for a failure, severely punished in some cases.

How did North Koreans think about the Kim Jong-un’s self-criticism?

A: “Due to the self-criticism, the Provisional People’s Committee for North Korea high-ranking told officials to submit “self-criticism papers.”  They needed to write down what went wrong or successful, as well as New Year’s resolutions.  “I will work with devotion,” (said by Kim Jong-un), meant to put a tighter control (on people).  He doesn’t do anything good.  I just want him to loosen the regulation.  Since everyone is making a living out of business at present, less control would make our businesses a bit easier.”

Furthermore, the New Year’s address had a slogan called “self-reliance and self-development.” It intends to bolster the economy and industries based on domestic resources, power generations, and technologies without depending on foreign countries.

Another reporting partner, B, also told me that she could not watch the speech on TV due to a blackout.

B: “Even without the blackout, no one wants to watch such a boring address.  It is not a movie.  Due to the "self-criticism" in the speech, high-ranking officials were forced to write self-criticism papers and New Year’s resolutions.

Kim Jong-un’s birthday is the eighth of January.  Till now, North Korea government has not disclosed his birthday.  The South Korean government estimates that he was born in 1984.  If it is true, he is 33 years old.  According to B, each organization has started to hold a “meeting of loyalty” to celebrate the birthday.  Since this kind of event had never been taken place before, there is a concern that the idealization of Kim Jong-un may be accelerated.