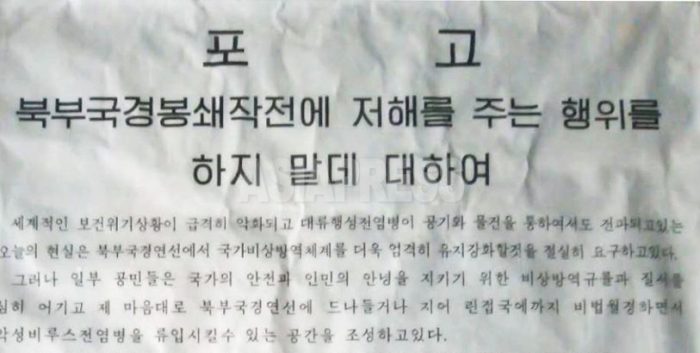 The secretly obtained police notice, entitled “Do not interfere with the operations of the Northern border blockade.” Published in late August 2020 and photographed by ASIAPRESS

The fundamentals of the North Korean regime's countermeasures against the novel coronavirus are: 1) keeping the virus out of the country; and 2) quarantining residents if in doubt.

Kim Jong-un is keenly aware of his country’s poor hygiene and weak quarantine infrastructure, and he has a sense of foreboding that if a strong infectious disease spreads to the capital city of Pyongyang, through the People's Army, and within construction mobilization organizations, he may be unable to prevent the regime from being shaken.

This anxiety manifests itself in the harsh system of ‘isolating when in doubt.’ Even when a person just has symptoms of a cold, their entire family and all their neighbors will be placed in isolation for about 3 weeks, with 24-hour surveillance set up around the neighborhood to enforce the quarantine.

The number of people living in poverty is increasing rapidly due to the side effects of the border blockade and excessive isolation measures. Among urban residents, there are many who have decided to escape their controlling situation by going into the mountains to live off the land. In addition, there are many who have become vagrants or been forced into prostitution. At the Chinese border, some residents have decided to risk severe punishment by engaging in smuggling.

A reporting partner living in the northern region of the country said, “The authorities said that the coronavirus is coming from China so to be careful- but I think the real purpose is to prevent people who are struggling to make ends meet here from fleeing to China.”

◆ The focus of coronavirus prevention on security measures

The "national emergency disease prevention measures” implemented by the Kim Jong-un regime outwardly advocates for the ‘safety of the people’, but it is clear that the focus is on security.

The notice reads, “Objects and beasts that approach our side of the Yalu and Tumen Rivers will be shot without warning.” Published in late August 2020 and photographed by ASIAPRESS

ASIAPRESS secretly obtained a copy of the document outlining the prevention measures. The document was originally posted by the Ministry of Social Security (police) at stations and other public places near the Chinese border on August 25. Shortly after, an ASIAPRESS reporting partner removed one such notice and emailed a photograph of it.

The notice proclaimed that the national emergency quarantine measures would be maintained more strictly and warned residents that the authorities have “set up a 1-2 kilometer buffer zone along the border and will shoot people and livestock entering the area without warning.” (Kang Jiwon)
Next Page: ◆ “We will shoot without warning…”full text of the police notice

Next Page： ◆ “We will shoot without warning…”full text of the police notice
1 2
Facebook Twitter はてブ Pocket Feedly
RECOMMENDATIONS
＜Inside N. Korea＞ A report about the COVID-19 situation from a party member in North Hamgyung Province: Those with fevers are placed in isolation and their apartment buildings are put under lockdown, People continue to go to work and the markets remain open, People are more scared of lockdowns than the disease
On May 13, the day after North Korean authorities officially acknowle...
＜Inside N. Korea＞ Running out of Juice: Regional Cities Receiving Just 2 Hours of Tap Water and Electricity per Day
In North Korea, the economic paralysis is becoming more serious due to...
Growing Illegal Housing Market in N.Korea
Report by PARK Chan-u, PAEK Chang-ryong; Edit by LEE Chaek  2014/July/...
＜Emergency Interview＞Lockdown Death Toll Climbs in Hyesan: “We are Dying Due to Lack of Medicine and Food”
On February 15, the lockdown of Hyesan in Ryanggang Province, located ...
University Students Are Bored With Formal Uniforms - Women Wearing Shorter Skirts As A Sign of "Rebellion"
The Daily Life of North Koreans2014/April/16 Written by PAEK Chang-ryo...
Exemplary-contributors Praised At The Public Notice-board
North Korea Food Situation - 3 2011/September/19 Report by Kim Dong-ch...