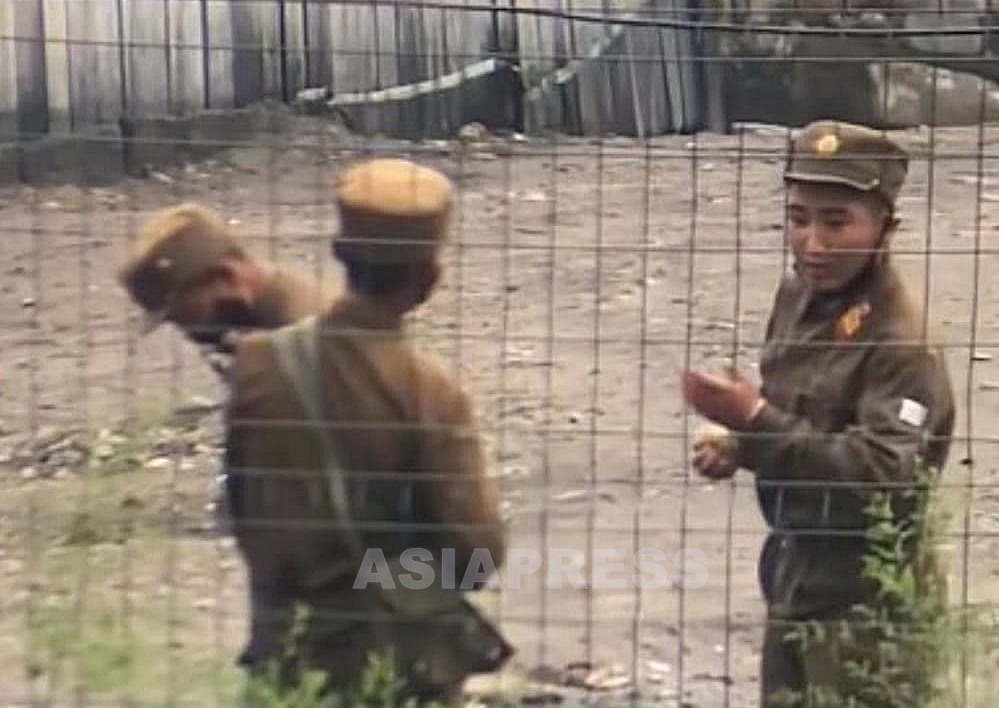 A young North Korean soldier guarding the border with a face mask lowered to his chin. This photo was taken by ASIAPRESS on the Chinese side of the border in October 2020.

COVID-19 continues to spread in North Korea. In the country’s provincial cities, there are signs that the authorities are increasingly cracking down on certain activities and strengthening controls. “A,” a reporting partner in a city in North Hamgyung Province, contacted ASIAPRESS on May 17. This was the second report “A” had provided to ASIAPRESS after another on May 13, and he said that the lack of medical supplies and food was severe in the city he lives in. “A” is a member of the Workers’Party of Korea and works at a mid-sized company. (KANG Ji-won, ISHIMARU Jiro)

◆ Have train services been halted due to COVID-19?

―― Has there been any changes in the city you reside?

A：  The authorities have tightened controls a lot. People are still going to work and being mobilized to rural areas (nearby), but everyone has to wear masks. The authorities have said they will subject people who take off their masks or walk around with symptoms (of COVID-19) to wartime law.

Gyuchaldae, or inspection teams, are even patrolling the alleyways of city streets, asking passersby where they are going. There are few people on the streets. At night, nobody is allowed to go outside. The city has almost become locked down.

※ Gyuchaldae are teams tasked with maintaining societal order by cracking down on civilians for certain behaviors. Normally, they crackdown on people wearing improper clothing or those who fail to wear Kim Il-sung badges.

―― Are other areas in the same situation?

A：  I’m not sure about other areas. The phone service doesn’t work at all, and there’s been a halt in the train service. We are not allowed to use the roads, and we can’t go to other cities or counties.

※ It’s unclear whether the halt in train service is local or national in scale.

◆ No medicine at pharmacies…markets are closed

―― How is the country’s medical system doing?

A：  The government is giving no food nor medical supplies to the people. There’s no medicine in the pharmacies. Not even cold medicine or domestically produced aspirin. People with money have probably bought them all up and are selling them at high prices.

―― Are the markets still open?

A：  The markets were closed on May 15. We have to buy things to eat from people around us, but there’s limits in doing that.

―― What is the government saying people should do?

A：  On May 15, the inminban (people’s units) told people to buy emergency food and medicine in advance. That’s all they said.