◆ With no Chinese products coming in, inflation ensues

North Korean citizens are more concerned by the economic threat of the crisis than the threat of contracting the disease. With imports stopped at the Chinese border, their lives have been immediately impacted. As Chinese goods are in short supply, prices have soared. The price of gasoline has risen by 30% and the price of cooking oil has doubled and tripled in some places. Even the price of domestically-produced rice has skyrocketed. (Information based on North Korea's latest prices)

A reporting partner in the northern province of Ryanggang said, “The number of traders at the market has fallen by about 30% compared to the normal level. There is nothing to sell because industrially produced goods such as shoes, clothing, and utensils are not coming across the border. Inventory prices are skyrocketing and the market is quiet, with few customers coming to buy anything other than groceries.” 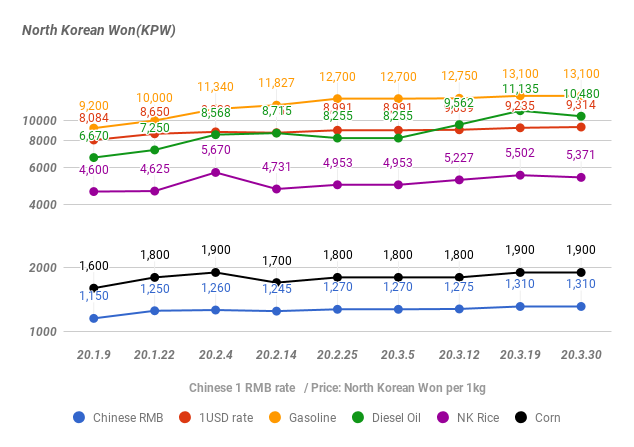 Cities further away from the Chinese border are said to be in an even graver situation, with the prices of Chinese-produced goods climbing even higher. Concerned by the market turmoil, authorities have taken tough price intervention measures.

According to another reporting partner living in the northern region of the country, “The authorities set a ceiling on the price of white rice at 4.5 RMB per kilogram in early February. On February 7, the authorities lowered this ceiling further, down to 3.6 yuan per kilogram. One merchant, who was caught selling rice for higher than 3.6 yuan per kilogram was forced to surrender 4 tons of rice to the authorities. Merchants are complaining bitterly about being ordered to lower their prices by the authorities, as the rice they are selling has not been received from the state.” (1 RMB is worth 172 South Korean won)

The market has been hit hard in the short term because daily consumer goods as well as vehicles and fuel are mainly imported from China. Recently, North Korea’s state media has been making frequent appeals for boosted output of domestically-produced goods. According to those who have visited Pyongyang, there are many shops and department stores that are full of excellent domestic products. Most of these products, however, were made by bringing in production equipment, raw materials, and packaging materials from China.

The pandemic is likely to have a huge impact on the North Korean economy and the Kim Jong-un regime in the future. Weaknesses of the North Korean-style totalitarian style of rule may certainly be exposed. This will be elaborated on later in this series of articles. It would be best, first of all, to discuss the impact of the UN Security Council’s economic sanctions- sanctions labeled as the strongest in history.
Next page :Regime had been frantically making up for losses suffered due to the economic sanctions...

Next Page
1 2 3 4
Facebook Twitter はてブ Pocket Feedly
RECOMMENDATIONS
The Truth Behind N.Korea's Military Parades
2014/May/11 Written by PAEK Chang-ryong, a defector reporterParticipat...
＜Inside N. Korea＞Discharged But Disgruntled: Former Soldiers Wreak Havoc After Being Sent to Cooperative Farms
This spring, soldiers who were discharged from the People's Army and ...
Forgotten Faces: What Happened to the Thousands who Happily Set Sail for North Korea?
Gazing down from the deck of the ship for a picture, some can be seen ...
＜Inside N.Korea＞ Interview with Two N.Koreans: Shock and Horror on Assassination of Kim Jong-nam
2017/Feb/18 The news that Kim Jong-nam, a half brother of North Korea...
＜Inside N. Korea＞ Hopelessly High: Regime Combats Rising Drug Abuse as Citizens Seek Escape From Reality
◆ Are even elementary school students engaging in drugs? A ‘public den...
＜N.Korea photo report＞A Look at North Korea's Impoverished Rural Women (4) 'People are working just to be robbed' (Photo 5)
◆Excessive quotas hurting farmers North Korea still employs collective...