2012/June/10
(Note: This message was written before the death of North Korean General Secretary Kim Jong-il.)

I've been told that this summer, footage that I took of soldiers suffering from malnutrition was transmitted all over the world. When I met the Rimjin-gang Editing Team in China, they showed me an example --- broadcast as the top TV news on South Korea's KBS, the Korea Broadcasting System. I hear that the news was given a lot of coverage in several countries, which means perhaps the presidents in South Korea or the United States saw my footage, or even Kim Jong-il. Just thinking about that makes me realize that I truly am a reporter, and it brings me joy. 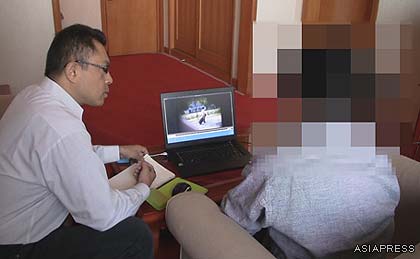 An army that cannot feed its soldiers, that makes them suffer from malnutrition, is the same as a concentration camp. Even soldiers have rights as human beings. I think I was able to present to the world, to a large number of people, that this is reality in North Korea.
And it's not just the soldiers. In North Korea, a lot of people are suffering from poverty. They are strongly dissatisfied, but they do not have leeway to pay attention to politics. What can you do when you have an empty stomach? Even so, everyone is now aware that "Those in power in North Korea are robbing the people, oppressing and controlling them, and that's why the people are suffering from poverty."

In history class in North Korea's schools, students are taught that a long time ago, feudal rulers mistreated the people, exploiting and seizing from them. They are taught that kings in the past were wicked and corrupt. But today's politics may be worse than back in the feudal ages. We are already in the 21st century, and yet the current regime is trying to keep political power within the family, into the third generation. This absurd situation will certainly be recorded in one of the pages of history. And those in power will be forced to stand in court to face judgment.

The people of North Korea cannot see, nor can they hear. They do not really know what is going on in the rest of the world, or how it functions. I hope that many people all over the world can offer their cooperation so North Korea can head towards reform and liberalization. And for this to happen, North Korean reporters like myself need to report to the world on what is going on in my country. If my reporting activities are discovered, then the administration will treat me as a spy. But even if I am caught, what is the crime that I have committed? All I am doing is reporting facts just as they are.

A reporter's work is by no means something bad or illegal. I will hold true, firmly believing that this is the right way, and continue to report until the moment I die.

-----------------------------------------
Gu Gwang-ho is in his thirties and lives in Pyongyang. He started his journalistic activities in 2011 after receiving a reporting training several times as by ASIAPRESS North Korea Reporting Team. He has made several undercover reports successfully in Pyongyang and South Pyongan Province. His remarkable video report on the starving People's Army soldier in 2011 was aired on many TV stations over the world.

Facebook Twitter はてブ Pocket Feedly
RECOMMENDATIONS
★★★ASIAPRESS ARCHIVE SERVICE-Licensing Fee
LICENSING FEE The client shall agree to all articles of the Conditions...
Profiles - ASIAPRESS N.Korea Reporting Team
Ishimaru JiroIshimaru was born in 1962 in Osaka, Japan. He is the Osak...
＜Inside N. Korea＞ Candle in the Wind: Burner Phones Bring Freedom of Communication But Now Face Crackdown
Many people in North Korea use burner phones, bought under the names o...
＜Inside N.Korea＞ Expansion of the market economy as the driving force behind social transformation--based on sources from inside N.Korea. (PART8, FINAL) The “class system” is being shaken. by ISHIMARU Jiro
2016/Dec/29 6 Expansion of the market economy shaking the “class syst...
＜Inside N. Korea＞ Female soldiers continue to face hardships in military service
◆Women assigned to infantry units due to shortage of troops The length...
Korean People's Army Extends 10 Year Service Term To 11 Years
2014/September/30 Written by ISHIMARU Jiro, Editor in Chief, Rimjin-ga...
Mass Starvations Occurring in the Breadbasket [pdf]
Mass Starvations Occurred in the BreadbasketJanuary 2013 Rimjin-gang -...
＜Inside N. Korea＞ Residential Electricity Suddenly Improves…Why are Some Cities Receiving 10 Hours of Power a Day?
The power supply for civilian use, known as the "residents' line," ha...
Stimulant Drugs Take Root in the Daily Lives of the N.Korean People (PART2)
2013/October/07 Written by LEE Jin-su<< PREVIOUS (PART 1) Drugs ...
[Video Report] What do the ordinary people eat in N.Korea? There are many types of food sold at hawker stalls. (Hawker stalls are individually owned food stalls)
What kind of food is available at hawker stalls in North Korea? In Jun...