In North Korea, since the beginning of Kim Jong-un regime at the end of 2011, the state has embarked on a nationwide campaign for the idolization of Kim Il-sung and Kim Jong-il. This has entailed the government building a series of monuments dedicated to the 'Great Leaders', such as a tower, constructed from stone, dedicated to Kim Il-sung and Kim Jong-il and a huge portrait of the two leaders, entitled 'Portrait of the Sun'.

It is assumed that the state campaign for developing further reverence of the deceased leaders is meant to sure up legitimization of First Secretary Kim Jong-un's position. The Kim Jong-un administration revised the "Ten Great Principles" last year for the first time in 39 years. These principles are the supreme dictates of the state, positioned beyond the constitution and the rule of the Korean Workers' Party (KWP). 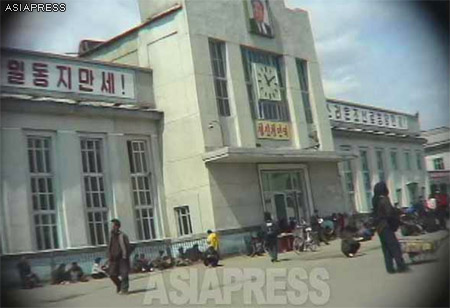 In the revised Ten Great Principles, deceased leaders, Kim Il-sung and Kim Jong-il have been deified through political absolutization and the Party is the only executive body in a position to conduct the politics of society. There is no doubt that the 'Party', in this absolutization, refers to Kim Jong-un himself. In addition, it is described that the Party is to be eternally preserved and the living pulse of revolutionary patrimony with the bloodline of Mount Paektu. (Note; the 'Bloodline of Mount Paektu' here refers to Kim Il-sung's family). This underlines the power succession to Kim Jong-un. 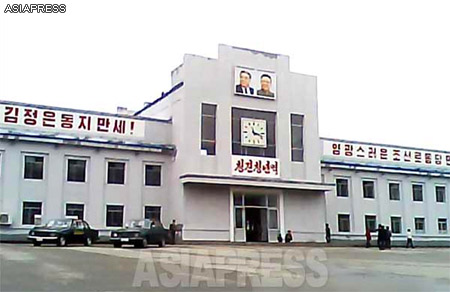 [2013] Chongjin station, taken in 2013. A portrait of Kim Jong-il has been added next to that of Kim Il-sung. (September/2013. North Hamkyung Province) ASIAPRESS

This move towards the 'deification of Kim Il-sung and Kim Jong-il' can be clearly observed from footage that ASIAPRESS North Korea Reporting Team filmed in various cities across the country. The latest pictures taken in the same spots now, prove that portraits of Kim Jong-il now hang side by side with those of Kim Il-sung. This was not the case 8 years ago. Additionally, it can be observed that slogan boards display the name of Kim Jong-un.

December of this year marks 3 years since the inauguration of Kim Jong-un. While the lives of ordinary people remains harsh, the state proclaims the "improvement of people's lives is top of the agenda". Kim Jong-un, however, has been devoting all his energy to enforce his power.

Many people believe that the current situation is much worse than it was during the Kim Jong-il era, others have voiced that Kim Jong-un has only inherited unpleasant aspects of his predecessors approach to governance. It is worth considering how aware the young Kim Jong-un is of the unrest of so many DPRK citizens.

Facebook Twitter はてブ Pocket Feedly
RECOMMENDATIONS
＜Inside N. Korea＞ Month-Long Lockdown Begins for Third Time in Hyesan as Residents Fear Further Hardship and Starvation
It has now been confirmed that the city of Hyesan in North Korea's Rya...
＜Inside N. Korea＞"Crash Landing on You" Finally Reaches N. Korean Screens: Interviews With the Women Risking their Lives to Watch It
At last, or should I say finally? The South Korean drama "Crash Landin...
＜Inside N. Korea＞ Hunger hits the countryside ... the rise of 'hungry households' confounds authorities
◆Agricultural producers are starving 'Hungry households' is what they ...
＜Inside N. Korea＞Authorities Concerned as Starving Soldiers Brazenly Attack Farms and Homes to Steal Food
In North Korea, the harvest of corn, which is the country's staple fo...
＜Interview＞ New year, old talk: What did North Koreans think of Kim Jong-un's New Year's address?
2019/Jan/16 ◆ “He repeated the same things as before...my attention d...
[Video Report] A rare glimpse of ‘No. 10 Checkpoints’ set up by the State Security Department
The reality in North Korea is that citizens are not allowed to move fr...