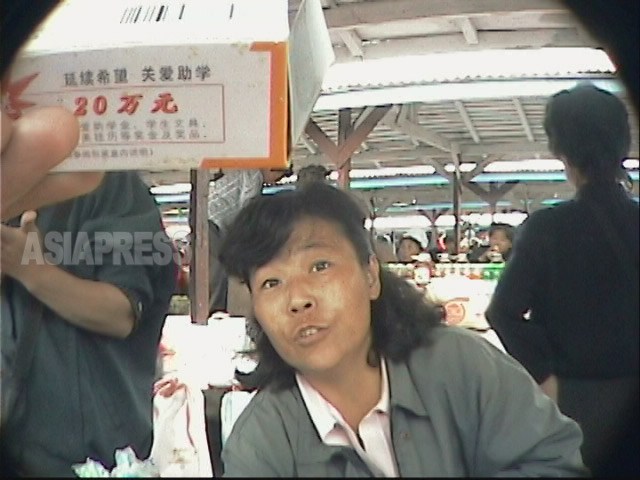 A legalized market called a “general market” in Chongjin City. The reporter is holding a box containing chemical substances made in China. In July 2004. Taken by Ahn Chol (ASIAPRESS)

2-2 Government’s response–conforming to the black markets

Urban residents and factory workers gave up waiting for the dilapidated food rationing system and started to engage in illegal businesses.  The government tried to stop the advent of black markets by reviving the planned economy.  However, it could not propose a viable alternative economic plan and ended up just repressing and cracking down on the black markets. The government tried to impose some measures to regulate the markets, but they did not work in the long run.  The government decided to legalize these private businesses operating within the black markets.

On the first of July 2002, the Kim regime suddenly released a new economic plan.  It was named the "Economic Management Reform Measure of July 1, 2002" (7.1 Measure) since it was publicized on July 1.   It aimed at maximizing the amount of profit from the black markets by adapting to the changing circumstances while adhering to the principles of socialism.  The contents of the measure are as follows:
Related Article: N.Korea Market Survey Reveals Basic Food Price Hike

The measure slightly showed the aspects of the economic reform such as stressing the significance of the companies’ profitability.  Therefore, a lot of Japanese and South Korean experts and media commented positively, “This measure is the North Korean-style economic reform.”  However, 7.1 Measure was far from the economic reform in reality.  Since the government forcefully banned the black markets without having an alternative plan to produce and supply food and consumer goods, the illegal transaction and businesses went back to underground again.  Hyperinflation happened as a result, and the society was brought back into the disastrous situation. 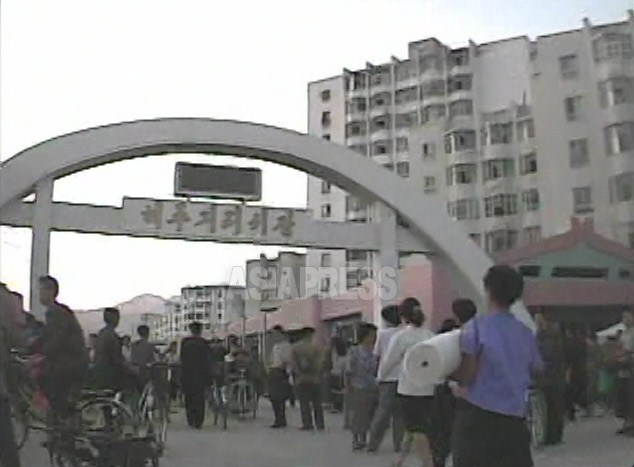 The entrance of an open market at southern South Hwanghae Province, Haeju. An arch and building have been constructed. In October 2008. Taken by Shim Ui-cheon (ASIAPRESS)

Therefore, black markets in different parts of North Korea had gotten themselves legalized under the name of “open markets”, merchants then had proper spaces at markets.  Merchants had to pay a land tax called “Jangsae” to the market management department under the Provisional People’s Committee of North Korea and get permission to open stalls.

They became owners of the stalls, which are around 80 cm wide.  Men, except retired ones, were not allowed to have businesses in the Jangmadang.   Although production of goods from factories was haulted and the food supply had ceased to be effective, men were not permitted to leave their jobs to become merchants.
Related Article: 〈Photo Report -1〉Public Market – The Moran Market (Pyongyang)

This meant that the majority of the merchants at the markets were women, the retired, and the elderly.  Though women were not allowed to work in the markets if they had another job through the state.  Only women who stayed at home, which are categorized as “dependents” could work in the markets.  The legal age for women to become a merchant was set at 45 years old.  The age restriction has been changed and withdrawn from time to time and there is no limitation for women as of July 2016. 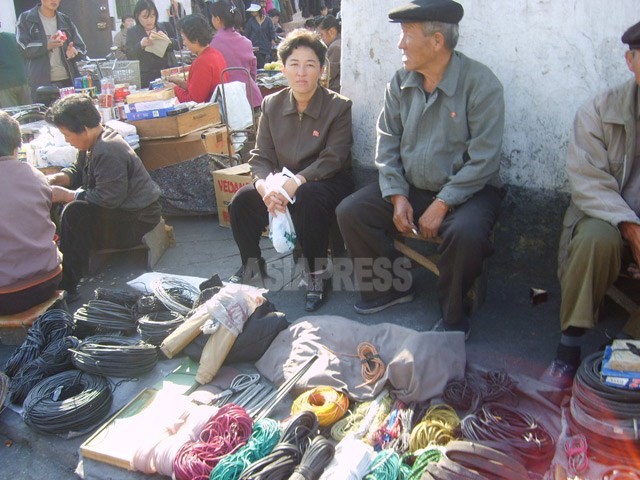 Crowded stalls at the back of some apartments. Most of the people are women and the elderly. Electric wires are being sold. It is said that most of the products are from China. June 2008, Pyongsong, South Pyongan Province. Taken by Paek Hyang (ASIAPRESS)

Aside from food, most of the products sold in the open markets are from China.  Since the domestic production of the factories in North Korea have been stagnant, the massive amounts of cheap products from China flow into North Korea.  Those imported products were first sent to central places of commerce such as Sinuiju, Rason, Chongjin, and Pyongsong, then wholesaled to the more remote local areas. Seaweed, medicinal plants, scrap iron, and copper scrap were gathered from different areas of North Korea, then exported to China through trade companies.  In the course of this trade, new types of jobs and a natural competition were created, making the North Korean black market economy more developed and diverse.

A market economy does not only mean the trade of items; service, transportation, property, information, and labor can also be subject for transaction as a good. A variety of the market economy’s goods and its development will be discussed later in this report.

[To be continued in part 3]

1 2
Facebook Twitter はてブ Pocket Feedly
RECOMMENDATIONS
N.Korean Drug Trade Spreads to Ordinary Citizens (PART2)
2015/January/14 Written by PAEK Chang-ryong, a defector reporterHeavy ...
＜N.Korea Crisis＞ Why is there a Food Shortage Crisis in the Breadbasket Region of Hwanghae? (PART2)
2012/May/10 Written by LEE Jin-suFarming Villages' Crops Taken by the ...
"Artificial Meat" - A Vital Source of Protein For the People
The Daily Life of North Koreans2014/March/04 Written by PAEK Chang-ryo...
Rimjin-gang - NEWS FROM INSIDE N.KOREA
Rimjin-gang English Edition First Issue>>> Rimjin-gang: The f...
Residents of N. Korea's Embattled Cities Face Starvation Amid Continuing Coronavirus Blockade
One of the characteristic works of French painter Millet is a painting...
Inside The Book 〈Table of Contents〉 JPEG SAMPLE IMAGE
Table of Contents Preface: To the Readers of the English Edition of Ri...
Growing Illegal Housing Market in N.Korea
Report by PARK Chan-u, PAEK Chang-ryong; Edit by LEE Chaek  2014/July/...
＜Inside N. Korea＞ Resentful Residents Forced to Foot the Bill for National Flood Recovery as Regime “Has No Money”
The torrential rains that hit the eastern part of North Korea in Augus...
Student Smugglers: High-Schoolers Sneak into China to Smuggle and Steal for their Families’ Futures
With the Chinese border remaining sealed to block the spread of corona...
Top Secret Documents on North Korea's 'Tongpyo’: Regime Admits to Suspending the Issuance of Banknotes Due to Financial Woes - ISHIMARU Jiro
We obtained a "top secret" North Korean document. The document, issued...