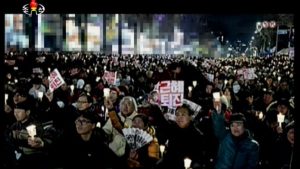 A rally calling for President Park Geun-hye to quit. Buildings behind are blurred out.(Quoted from Korean Central Television on December 3)

Korean Central Television, a state-owned television service in North Korea, broadcasted the pixelated image of the rally calling for South Korean President Park Geun-hye to step down since November.

It happened in a talk show called “The traitor, Park Geun-hye, must stop playing the deceptive “political game” and immediately resign” on the third of December.

The TV show broadcasted around 20 images to introduce the situation of the rally and related gatherings for 13 minutes.  However, high-rise buildings in the central Seoul and the bronze statues of Commander Yi Sun-sin and King Sejong at Gwanghwamun Square were all pixelated.

(Commander Yi Sun-sin is famed for his victories against the Japanese navy during the Japanese invasion of Korea by Hideyoshi Toyotomi in the 16thcentury.  King Sejong created the Korean alphabet, Hangul, in the 15th century.)

Korean Central Television, operating under the regime, unnaturally pixelated the images to hide the development of South Korea while actively propagandizing the growing anti-Park Geun-hye sentiment among South Korean people.

Commander Yi Sun-sin and King Sejong are regarded as heroes in North Korea as well, about whom students learn at school.  However, regarding bronze statues, only those of Kil Il-sung, Kim Jong-il, and his mother Kim Jong-suk can be built in the city central.  In North Korea, people can revere only three of them as “the peerless great person”.

However, it is unrealistic that the bronze statues of the heroes around 400 to 500 years ago located in Seoul would have a significant influence on the people in North Korea.  Presumably, censorship personnel in the talk show have pixelated the images with precaution since they overly surmised the opinion of the government, for fear of being criticized later on.

◆ In the 1980s, videos of a rally let the ordinary people in North Korea how prosperous South Korea was.

In the 1980s, large-scale protests calling for the anti-dictatorship and the democratization got momentum.  North Korea frequently broadcasted the news about it.   They intended to domestically propagandize that the masses in South Korea were against the military dictatorship and the government lacked the legitimacy”.

However, North Korean people focused on the different information in the videos of protests.  They started to guess how high the South achieved the economic development, by looking at clothes, sceneries of the city, and the number of cars on the street.

Regarding the new “finding” from a video of the rally in the 1980s, a North Korean defector in Seoul described that “I had been taught that the people in South Korea were repressed and starving under the military fascist government.  However, young people in the video wore sophisticated clothes and there were no scrawny people at all.  The high-rise buildings stand along the streets in the city. The rumor, “South Korea is affluent,” that I had vaguely heard was verified, I thought”.
Related Article: [Video Report] Fleeing back alley vendors by cracking down

Following the inflow of the information since the 2000s, North Koreans, regardless of the age and the place of residence, understand as a commonsense that South Korea has achieved the economic development.  Some people even feel the sense of admiration and pride.  It seems too late to blur out the buildings and statues, having no effect on the citizens. (ISHIMARU Jiro)

Facebook Twitter はてブ Pocket Feedly
RECOMMENDATIONS
Kim Jong-un’s Furious Response to the Defection of 13 Restaurant staff
On April 8, the South Korean Ministry of Unification announced that 13...
＜N. Korea Pro Report (Part 3)＞ How is N. Korea’s Economy Faring in the Face of the Coronavirus Pandemic and Continued Sanctions? A Look at the Regime’s “State Smuggling” Operations
After strong sanctions were imposed by the U.N. Security Council, the ...
＜Photo Report＞ People are exploited in mobilized for forced labor (1) Urban view
2015/11/6 The reason North Korea can still sustain production and cons...
Profiles - ASIAPRESS N.Korea Reporting Team
Ishimaru Jiro Ishimaru was born in 1962 in Osaka, Japan. He is the Osa...
＜Inside N. Korea＞ A sergeant dies in the act (of stealing) ... Desperate soldiers raid smuggled goods to survive
◆State agencies involved in smuggling Hit hard by the United Nations' ...
＜Inside N. Korea＞ Birthday Ban: Why N. Koreans were forbidden from raising a glass to Kim Jong-un
2019/Jan/10 ◆ Is Kim Jong-un portraying himself as a ‘humble’ leader?...
＜Secretly Obtained N. Korean Documents＞ “People Approaching the Border will be Shot on Sight”...Police Notice Reveals Ruthless Coronavirus Measures
The fundamentals of the North Korean regime's countermeasures against ...
MAP
Rimjin-gang COVERAGE MAP - DPRK and Chinese border zone...
＜Inside N. Korea＞ North Korea's financial crisis has made it impossible to print banknotes. Efforts to issue temporary money coupons "Tonpyo" have been made to replace them, but distrust is growing.
North Korea's financial woes have worsened, with state agencies and s...
＜Inside N. Korea＞ Escape From Samjiyon: Young People Flee Kim Jong-un's Luxury Tourism Zone. "There are no Chinese tourists because of coronavirus. We can't survive."
Create a world-class international tourist city... In November 2016, K...