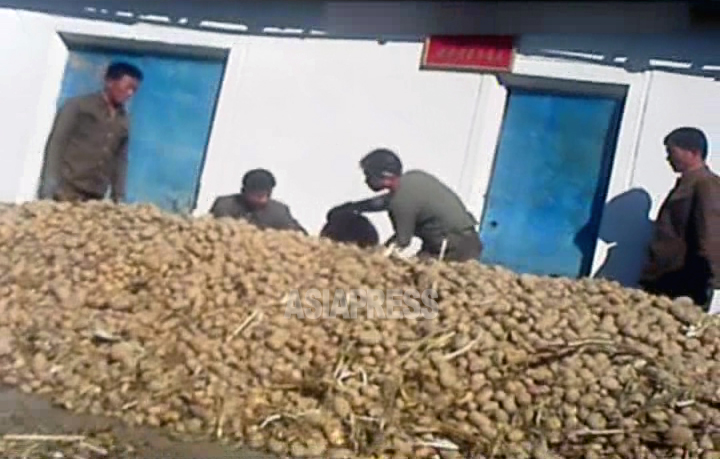 Potatoes being inspected at a market. Photographed in November, 2012, by ASIAPRESS

According to a reporting partner in Hyesan, Ryanggang Province, the cost of potatoes began rising from August 17, two days after the anniversary of Korea’s liberation from Japan. By August 20, the price of potatoes had soared from around 1,000 North Korean won to 2,000 won per kilogram.

In North Korea, potatoes are cheaper than any grain. The country’s poor eat potatoes as a staple and they are used commonly for side dishes. When the price of potatoes suddenly doubled, therefore, it resulted in turmoil at the markets.

According to the reporting partner, “2,000 won per kilogram is up there with corn- an exorbitant price [for potatoes]. With rice and corn prices also rising, some people were in a panic at the markets. In particular, poor people, those living hand-to-mouth, were frightened by the soaring potato prices and rushed to spend all of their money on rice.”

Ryanggang Province is the country’s leading producer of potatoes. In mid-August, however, there were no fresh potatoes in circulation, with heavy rain causing damage to provincial roads and disrupting distribution of potatoes from southern regions. The reporting partner speculated that prices skyrocketed due to supply dwindling.

As of September 12, however, the price of potatoes has fallen back down to 700 won per kilogram, with fresh potatoes once again making their way to market.

But with potato prices returning to normal, why are consumers still hoarding supplies?
Next page : The reporting partner explains...

Next Page
1 2
Facebook Twitter はてブ Pocket Feedly
RECOMMENDATIONS
＜Inside N.Korea＞ Enforced Mobilization of Unemployed and No-Show Employees to Farm
In North Korea, 200-day battle and combat to support farm village are...
Delinquent Juveniles Mobilized For Forced Labor
The Youth Union(*), an umbrella social group of DPRK Worker’s Party, i...
＜Inside N. Korea＞ Expansion of the market economy as the driving force behind social transformation--based on sources from inside N.Korea. (PART2)  The black market and “farmer’s market” connect. by ISHIMARU Jiro
2016/Dec/20 ◆ How did the expansion of the market economy take place?...
Stimulant Drugs Take Root in the Daily Lives of the N.Korean People (PART2)
2013/October/07 Written by LEE Jin-su<< PREVIOUS (PART 1) Drugs ...
＜Interview with inside N.Korea＞ Ordinary N.Koreans have, “No Interest” and “No Expectations” about the Worker`s Party Congress -Only Hope Is “Opening up N.Korea”
The 7th congress of the DPRK Worker’s Party finally ended on May 10. H...
＜Latest Interview on Emergency in N. Korea＞ “Those who will die, will die”: Poverty a Greater Concern than Coronavirus as Regime’s Warnings are Met with Public Indifference
With the coronavirus spreading from China to neighboring countries, wh...