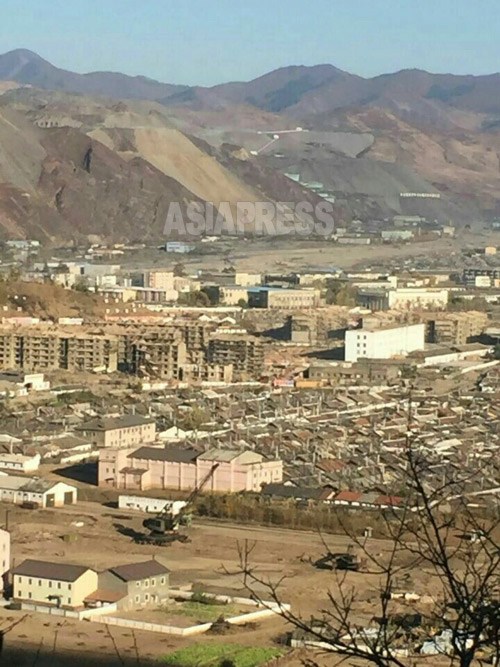 Musan County of North Hamkyung Province from China side across Tumen River. There was a rally at the region close to the border for alerting drones. October 30, 2016 Taken by ASIAPRESS

The North Korean government is said to start a joint drill of civilians and military to shoot down sneaking drones in their sky from March 14. They are so highly on alert for the infiltrating drones that ammunitions are distributed and a reporting system related to the drones is newly set up. (Kang Ji-won)

A reporting partner in northern part of North Korea reported the details of joint military drill of civilians and military on March 22. The details are as follows:

The joint drill of civilians and military started from March 14 on a national scale.

The contents of the drill is observing, finding, reporting, and shooting drones. Participating units are Reserve Army of Laborer and Peasants, Reserve Forces, Youth Red Guard and military forces in the area.

The authority established a new system to report drones. The system has the following flow; 1. Head of Imminban (Neighborhood Unit) 2. Security Agent (Secret Police) or Security Force (Police) 3. Military Base close to the area. As the instruction to shoot down has already given, they keep watching the airspace with ammunition even during the drill. Soldiers are ready to shoot down the drone by exercising antiaircraft drill.

Reserve Forces: It has the level of weaponry and system equivalent to an army infantry division

Reserve Army of Laborer and Peasant: It consists of unmarried female and middle-old male who are not eligible for the reserve forces

“There was an instruction to civil and military forces to shoot down drones using any available artillery, since bomber drones to target the supreme leader and filming drones are intruding the Republic’s sky,” said the reporting partner.

North Korean authority has reacted nervously to drones since last December. At that time, ‘Uri Minzokkiri (North Korean state media)’ criticized harshly that North Korean defectors exercised a drill to destroy the statues of the supreme leaders (Kim Il-sung and Kim Jong-il) by using drones at the Sino-North Korean border, added that the leader and participants must be killed relentlessly.

A couple of reporting partners testified that, around the Autumn last year, there was already the instruction to report drones coming across the border, if anyone saw them, at people’s gathering or Inminban meeting. At the same period Chinese authority put a sign, saying “It is strictly prohibited to film the border area by drones without permission.” It seems because the anti-North Korean groups of South Korea are active in sending SD card, USB memory and filming by using small drones along the Sino-North Korean border.