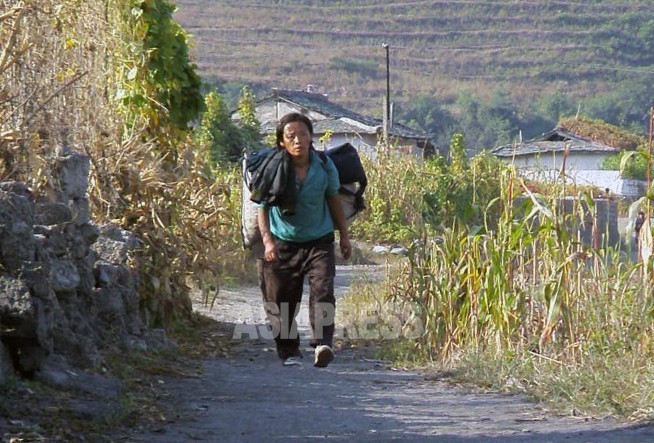 (Photo) The poorest people in North Korea are farmers. This photo shows a woman carrying a large sack in a rural area outside of Pyongyang. Photographed in October 2008 by Jang Jeong-kil (ASIAPRESS)

There are signs of starvation in rural areas in North Korea. Designated ‘hungry households’ have already consumed the food that was distributed to them last year and the situation is reportedly worsening as the North Korean authorities cannot afford the cost of response measures. (Kang Ji-won / ISHIMARU Jiro)

Between spring and early summer in North Korea, there is a yearly “spring shortage”, when the supply of food distributed from the previous year’s harvest runs out. This year, however, since early April, farmers have already started to suffer from hunger, with farm management committees in various areas declaring states of emergency.

“An increasing number of farmers are unable to come to work because they do not have food or money. The farm management committee informed the ‘hungry households’ that they will be given time off from their duties, so that they may collect and sell wild herbs and vegetables at the market. But they have said that there is no money to be given to them at this period.”

On farms, a 1-2 month supply of grain is usually kept in reserve for the busy periods such as rice planting or weeding. Each farm, however, was supplied with only 20 days worth of grain at the beginning of April, with nothing being dispensed to individual farmers. A farmer on his way to work, when asked by a reporting partner, said that they are only able to eat 2 meals a day.

The same is true on farms in Yanggang Province.

“70 percent of those living around farms are subsisting solely on potatoes,” said an investigating partner. Living off of just potatoes, this means that North Koreans are one step away from a famine. With spring having just begun, it is alarming that a considerable food shortage has already developed. (As opposed to potatoes, one cannot subsist on corn porridge and will eventually starve.)

So why are farmers, the producers of North Korea’s food, the ones who are starving? In North Korea, each cooperative farms is tasked with providing the state with a set amount of food to be used by the military and government. Farmers are only allowed to keep whatever extra crops they can produce. The government’s quotas, however, are set far too high.

In addition, last year’s heat waves and drought left the country with poor harvests. Despite this, farmers were still forced to meet their quotas. Now, they are left starving, victimized by the structure of requisition and exploitation set up by the state.
Next page : Robbed by the regime, farmers go hungry in order to meet excessive quotas…