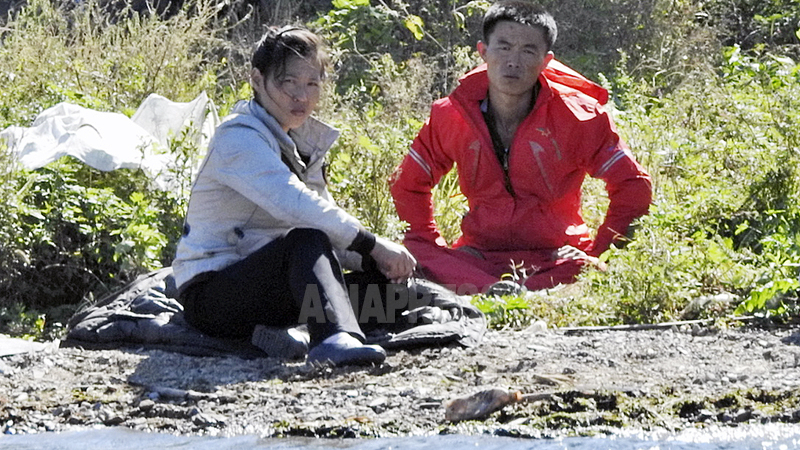 A young North Korean man and woman gaze across at the Chinese side of the Yalu River. Perhaps they are a couple. Photograph taken in September, 2019, by ISHIMARU Jiro.

Chinese relations with Pyongyang are said to be rapidly deteriorating following the murder of a Chinese citizen in Changbai County, Jilin Province by a North Korean. A reporting partner living in Ryanggang Province, across the Yalu River from Changbai, gave the following report in early December.

According to the reporting partner, the murder took place in late November when a North Korean man who had snuck across the border to Changbai was attempting to burgle a private home. Confronted by the homeowner, the thief killed the man before fleeing back across the border. Now, Chinese officials are officially calling for the murderer’s extradition.

The culprit’s escape has greatly angered the bereaved family, who have since set up loudspeakers to hurl insults across the border and to demand for North Koreans to “execute the murderer.”
Next page :Increase in crime due to worsening living conditions...

Next Page： ■ Increase in crime due to worsening living conditions
1 2
Facebook Twitter はてブ Pocket Feedly
RECOMMENDATIONS
＜Inside N. Korea＞ North Korea's financial crisis has made it impossible to print banknotes. Efforts to issue temporary money coupons "Tonpyo" have been made to replace them, but distrust is growing.
North Korea's financial woes have worsened, with state agencies and s...
＜Inside N. Korea＞ Drug Trade: Addicts and Traffickers Turn to Opium as Methamphetamine Prices Skyrocket Due to Border Blockade
The price of methamphetamine trafficking has skyrocketed in North Kore...
Column –Voices from inside N.Korea, ISHIMARU Jiro
Among East Asian countries, only the people of North Korea have been l...
Growing Illegal Housing Market in N.Korea
Report by PARK Chan-u, PAEK Chang-ryong; Edit by LEE Chaek  2014/July/...
Stimulant Drugs Take Root in the Daily Lives of the N.Korean People (PART3)
2013/October/25 Written by LEE Jin-su<< PREVIOUS (PART 2) The Hi...
＜Latest Report on N.Korea＞Another year of emaciated soldiers in N.Korea; Young Soldiers suffering with Malnutrition (Four Photos)
In late July, a reporter for ASIAPRESS was on a cruise ship on the Ya...