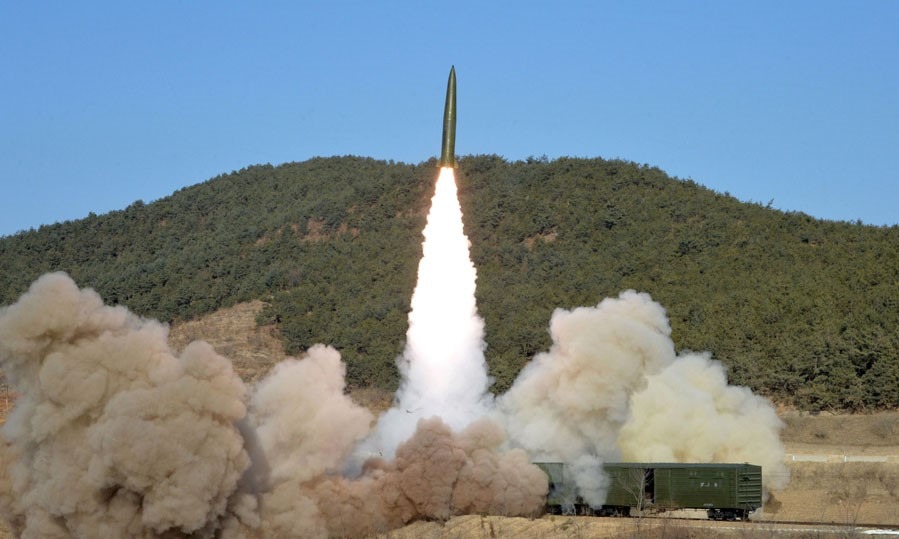 (Photo) A picture of what is believed to be a train-launched missile test. Quoted from the Labor News, in January 2022.

◆ Successful testing does not equate to actual deployment or mass production

North Korea conducted another ballistic missile test on January 30- the 7th time this year. Oh Sowon, a former North Korean agent born in Japan, explains the series of missile tests while deciphering domestic developments, including the 4th Plenary Meeting of the 8th Central Committee of the Workers' Party of Korea, which was convened at the end of 2021.

The author believes that at the general meeting of the Central Committee of the Workers' Party of Korea held at the end of 2021, a decision was made to complete the development of hypersonic missiles and "mass produce" them for field deployment in 2022. However, successful testing and mass production for actual deployment are entirely different matters.

To explain weapons production in North Korea briefly, development of weapons is completed at the National Defense Academy of Sciences, before the Ministry of People's Armed Forces submits a deployment plan to the Second Economic Commission, which is in charge of munitions production. After the committee reviews the project and offers the budget and production plan to the Central Military Commission of the Workers' Party for approval, mass production begins to create the "national standard product."

This is called "serial production" in North Korea's munitions industry. The fact that the January 17 launch was called an "inspection and firing test" means, in short, an inspection of the "products" produced at the munitions factory before delivery. After "inspection," they are delivered to the military and deployed.

As a matter of course, the military pays the "bill" to the Second Economic Commission from the military budget. The Academy of National Defense Science and the army's budget are decided by the Central Military Commission of the Workers' Party and are drawn from the national budget for expenditure. Therefore, the munitions factories under the Second Economic Commission cannot pay wages when weapons production stops. In a sense, it is an independent profit-making entity.

As for the foreign currency budget required for weapons development and production, the Munitions Industry Department of the Workers' Party takes the lead in "earning foreign currency" through its affiliated trading companies. It also operates a specialized bank for the management of military funds.

Since the munitions industry department of the Workers' Party of Korea has the right to export non-ferrous metals, coal, weapons, etc. (i.e., "concessions") to obtain foreign currency, it appears to have a relatively large amount of foreign currency compared to other sectors, but this is not quite the truth.

In the late 1980s, I was told by a banker involved in the export of "Mars 3" Scud missiles to Iran that each missile was exported for 3 million US dollars.

However, since more than 70% of the materials were imported to produce the missiles, the production cost was high, and the net profit was low. Therefore, he lamented that there was almost no foreign currency left for mass production, not to mention funds for developing new weapons such as ICBMs and the development of nuclear weapons, as instructed by the leader.

The company would give 30% of its sales (USD 900,000) to the leader (Kim Jong-il at that time), contribute 10% (USD 300,000) to the military as a fund to strengthen national defence, and use the remaining 1.8 million dollars to pay for the development of new weapons and the import of materials needed for production. However, there was still a shortage.

He said they were running an accounting deficit because they were borrowing from the government due to the North Korean domestic currency needed to pay for labour and utilities.

Even though the "domestic production rate" of materials is increasing, imported materials are still essential, so foreign currency is constantly needed to maintain mass production. Moreover, North Korea's arms exports are now under much stricter international scrutiny. 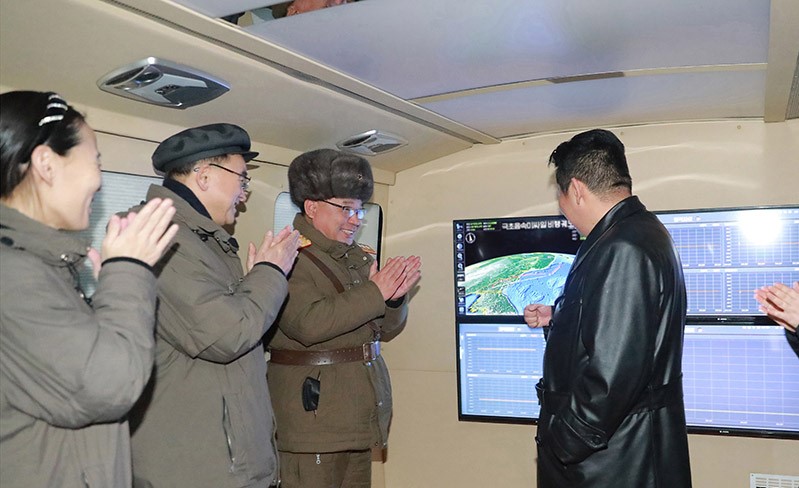 As for the development of advanced weapon prototypes, even if Kim Jong Il and the other departments of the Workers' Party in charge of the munitions industry gave priority to the use of imported items and foreign currency, it would not have been easy keep up production due to the lack of foreign currency. Therefore, it was essential to expand production line facilities and secure materials, and above all, it was essential to secure stable electrical power.

Still, electricity issues cannot be resolved solely by the Military Industry Department of the Workers' Party or the Second Economic Commission, which is the administrative body in charge of military production. Although there are priority power transmission measures for the military-industrial sector, the quality (frequency) is the problem. Precision machinery is sensitive to fluctuations in the frequency of electricity, and if the frequency becomes unstable even slightly, it will stop.

In the past, when one of the largest coal mines in North Korea, the Anju mine in North Pyongan Province, was flooded and the tunnels were submerged; they tried to pump out the water using a Japanese-manufactured pump but, the frequency was so unstable that the pump stopped several times a day and could not operate properly.

China has developed to the point where it is now called the "world's factory," but until about 20 years ago, the electric power was unstable, and the defect rate of precise products was high. The stability of electric power was essential to improve the quality of Chinese products.

A person who had worked at the 2.8 Machinery General Factory in Jagang Province, who defected from the country roughly 12 years ago, testified that even if nearly half of the automatic rifles produced were defective, the military personnel who came to inspect them were bribed to deliver them as “good products”.

For reference, there is a clause in the military law that, if more than 30% of defective products are produced in a munitions factory, the factory manager will be put on military trial and sentenced to death. Quality control (QC) is limited to a small number of prototypes, and when it comes to mass production, North Korea's production sites immediately become rife with defective products.

It is reported that in the era of Kim Jong-un, equipment to stabilize voltage and electric power has been introduced from overseas to allow for precise fabrication of goods at factories.
In the past, I witnessed an expensive Chinese-made power ballast installed in a munitions factory producing electronic components for weapons, but it could not withstand the sudden and significant fluctuations in voltage and current being transmitted to it, and its operation was interrupted. In my opinion, the fundamental improvement of the conditions that allow for mass production has not yet been made.

◆ The Dragon's Head and the Snake's Tail: Is Mass Production Possible?

In other words, the actual deployment of weapons in North Korea is not proceeding as planned. Repeated delays and the eventual scaling back of deployment, and the deployment of a significant number of dummy weapons are common occurrences.

In North Korea, many projects are unsustainable, with their completion eventually left in limbo. I have seen subordinates at work whispering that the official in charge will be unlucky if he upsets the leader in the process.

Since the beginning of the era of the temperamental Kim Jong-un, there has been a growing tendency to avoid being selected for high-ranking official positions where the probability of getting the wrong end of the stick is high.

It is common knowledge that it takes time for any product to go from development to market, but if we overestimate the time left before North Korea's weapons become a full-fledged threat, we will be badly stung.

The United States is mainly responsible for taking a lax view of the current situation in North Korea. North Korea's weapons development has sped up beyond what it was in the past. It is necessary to fundamentally rethink our strategy to see whether the threat can be controlled solely through this defensive arms development race.

At a Workers' Party Politburo meeting on January 20, Kim Jong Il indicated that he would consider resuming nuclear and ICBM tests, saying that he would "totally reconsider" measures against the US. The official announcement of the lifting of the moratorium has caused quite a stir in the South Korean media. I wonder how far the Kim Jong-un regime is willing to go. (End)

Oh So-won (pseudonym)
A man in his 60s. A former official of an organization affiliated with the Workers' Party of Korea. He was born in Japan and returned to North Korea as a teenager as part of the repatriation project. After graduating from a university in Pyongyang, he worked for a trading company affiliated with the Workers' Party of Korea and then engaged in espionage activities against South Korea. He defected to South Korea in the 1990s and worked as a company employee before retiring. He is the author of "Naked North Korea" (Shinchosha), and his column "Pyongyang Watch" was serialized in the Tokyo Shimbun (2010-2012). He has also contributed numerous articles to the monthly magazines "Shincho 45" and "Factor", and the information website "Foresight".

※The contributions of external authors may not be consistent with the editorial policy of ASIAPRESS.
ASIAPRESS.