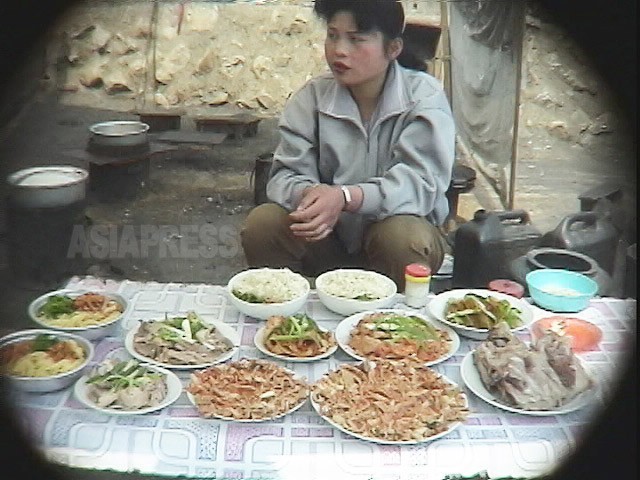 (Photo) Colorful dishes of pork, vegetables, and buckwheat noodles being served at an outdoor restaurant near the market. Photographed in South Pyongan Province in June, 2005 by Lee Jun (ASIAPRESS)

Who are the most powerful people in North Korea? It was common opinion among residents that, outside of government officials, employees of trading companies were the most powerful. In the last 2 years, however, much has changed. (Kang Ji-won)

Due to economic sanctions, North Korea’s trade with China in 2018 was cut to less than half of the previous year’s total, with exports falling by a staggering 88%. As if making a decisive blow, Chinese authorities stepped up customs inspections this year, resulting in North Korean exports to China decreasing year-on-year by 20% from January to March.

In addition, Chinese authorities have cracked down on smuggling at the border, leaving North Korean trading companies utterly helpless. From the ‘Kangsung Trading Company’, operating under the Ministry of People’s Armed Forces, to the ‘Moran Company’, which generates funds for the regime under the supervision of ‘Room 39’ of the Workers' Party, staff have been reassigned and regional offices have had to be shut down.

In North Korea, trading companies are assigned quotas, called ‘tasks’, to make payments to the state. In 2018, with international sanctions coming into full swing, officials of trading companies, stationed in China, were under severe pressure from Pyongyang to meet their quotas. There were even some who, while working abroad, chose to flee for fear of punishment by the regime.

Eventually, following the collapse of the Hanoi Summit in February, and with it, the regime’s hopes of lifting the sanctions, the North Korean authorities decided to reduce the quotas set for each trading company.

In mid-May, a reporting partner, well-versed in the affairs of trading companies, and living in Hyesan, in Ryanggang Province, gave the following account of the internal situation:

“All of the trading companies operating in the Hyesan area last year saw their profits fall below 30% of the targeted amount and, this year too, they only reached halfway. The government can no longer criticize or punish the officials they judge responsible. The ‘Baekdu Miryeong Company’, a large company based in Hyesan City, was responsible for smuggling goods to and from China, making $70,000 for the state last year under sanctions. This year, however, it will be difficult for them to make even $50,000.”
Next page : Trading companies give up on trade, compete with citizens running private restaurants...