Notification issued that Party section-chief of the administrative division executed by firing squad - Large-scale purge continues.
Throughout North Korea, a large-scale liquidation connected to the former Vice Chairman of the National Defense Commission, Jang Song-taek, continues unabated. It has been confirmed that the section-chief of the administrative division in the Korean Workers' Party (KWP) was executed by firing squad. Our reporting partner, an administrative officer in the Northern Province of Ryanggang, North Korea explained this latest incident via telephone on 24th January. 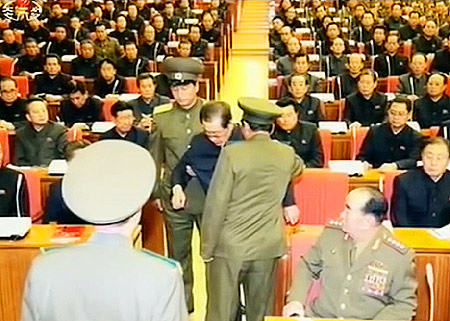 A picture issued by the North Korean State run media as the scene of the arrest of former Vice Chairman of National Defense Commission, Jang Song-taek at the KWP Politburo expanded meeting. (PHOTO: A screen grab from KCTV.)

Our partner gave us the following information, clarifying that it was obtained thorough local ranking officials at the KWP and the State Security Department (intelligence service-secret police)

According to our partner, the name of the person executed was "Choi Byong-hi" 최병히 (age unknown). This name was on the "elimination list" (the notice listing the names of individuals to be removed from their posts. This should not be seen as a "wanted" list, and not all listed individuals are set for execution) sent from Party Central, Pyongyang.

"The elimination related to Jang Song-taek has been delivered from the Party Central to the local organs. The name Choi Byong-hi, section-chief of the administrative division (of the KWP) was on the list. Party officials explained to us that he was executed by firing squad. Normally, if there is a personnel shuffle in the Party, notifications will be delivered to the local branches too. This time the "list" was not in accordance with the personnel shuffle, but it had the names of the liquidated personnel".

Around 3,000 affiliated with Jang displaced to mountainous regions.
The purge of people considered Jang's affiliates seems to be ongoing. There are considerable numbers of people have been expelled to the countryside. According to the research of our reporting partner, a regional administrative officer, some 3,000 people regarded to be affiliated with "Jang's faction" have been displaced from Pyongyang to Ryanggang Province. Ryanggang is located in the northern mountainous region which shares a border with China.

Our reporting partner told us that these exiles were not sent to the border area, but dispersed to mountainous remotes such as Paegam County. Paegam County is a highland area, the main products of which are potatoes. It is said that around half the residents of the county are exiles from other regions, punished with political crimes. 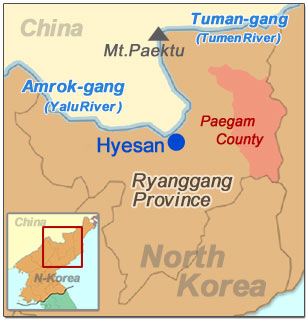 There are rumors that the liquidations reach to the third generation of those who were purged, aiming at the complete elimination of these supposed enemies of the state. However, as it stands, it is observed that the range of the liquidation is limited to lineal kin. Another reporting partner, living in a Sino-North Korean border town, explained the following via phone communication at the end of last December;

"In the county where I live, there is a woman who was the wife of a son distantly-related to Jang Song-taek, she was expelled from Pyongyang. According to the rumors, Jang's relatives have been executed by firing squad, but this woman was not regarded as having a direct relationship to Jang's family and she was (through forced divorce) expelled to the remote countryside. She looks around 37. She was originally from this area, and she currently lives together with her parents after she was displaced from Pyongyang. It seems that she was not given any special kind of punishment except for her forced divorce and displacement, and she continues to report for work each day."

According to our reporting partners, the series of liquidations are continuing in the direction of those regarded as the affiliates of Jang Song-taek, however our partner adds that in North Korea, with these kind of large scale political incidents, things are usually settled through a general review by the Party or Security organizations.

A reporting partner, who has a position in the local administrative institution, describes the current status of the liquidations as follows:
" Now we are seeing some signs of movement of each of the local organs and institutions preparing toward a general review of the incidents".

Facebook Twitter はてブ Pocket Feedly
RECOMMENDATIONS
＜Inside N. Korea＞ Electricity Situation Deteriorates Further as Equipment Remains Stuck in China… “Even in the city center supply is limited to one or two hours a day”
Sixty to seventy per cent of North Korea's electricity comes from hy...
The Dark Ages: Residents Complain as “Power-saving” Zones Expand Across the Countryside
“We don’t have electricity for even a second. Not a blink. It’s like l...
＜Inside N. Korea＞ Truly Powerless: Residential Access to Electricity and Water Restricted...Has Border Blockade Paralyzed Power Plant Repairs?
From around May, the lives of North Korean urban residents have been d...
＜Inside N. Korea＞ Trade Block: Coronavirus Causes Collapse of N. Korean Exports to China
According to a report released by the Chinese customs authorities on M...
activities/distributions
THE OUTLINE OF ASIAPRESS INTERNATIONAL Title: ASIAPRESS International ...
＜Photo Report＞ Kotchebi, the Homeless, Under the Kim Jong-un Regime (PART2) Toddler worn out on a street while regime shows off luxury orphanages
2016/Oct/27 The North Korean state media has often announced that Kim...