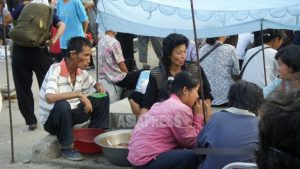 Residents buying food from a street vendor. The man on the left appears to be suffering from malnutrition. Taken in Gangdong County, Pyongyang by Jang Jung-gil, September 2008 (ASIAPRESS)

North Korean authorities have suspended the operation of private restaurants since October 11, according to an ASIAPRESS reporting partner in Hoeryong City, North Hamkyung Province. (Kang Ji-won)

Regarding the local situation, a reporting partner said during a phone call with ASIAPRESS on October 15, "They have completely shut down all privately operated restaurants since October 11. The police officers are going around and telling people to close their restaurants."

In Hoeryong City, residents had converted their homes or warehouses into restaurants to sell noodles, tofu, bulgogi and other basic meals. Successful noodle shops could make around 200 CNY (approximately 32,000 KRW) per day, according to the reporting partner.

The reporting partner explained that the government's decision is intended to boost the profits of the national service network but expressed doubt regarding the sustainability of such measures,  saying, "At the beginning of this year, the private sale of medicine and the operation of private restaurants were banned following anti-socialist inspections, however, enforcement of the ban was relaxed only a month later."

According to the reporting partner, there are many state institutions with affiliated state-operated restaurants. Institutions such as the Commercial Management Office (under the People's Council) and various trade bureaus operate their own restaurants, however, their prices are so high that ordinary residents choose to eat at inexpensive private restaurants instead. Charging customers according to competitive market prices, private restaurants thrived compared to the state-operated restaurants.
Next page:It is unknown at this stage whether the authorities...

Next Page
1 2
Facebook Twitter はてブ Pocket Feedly
RECOMMENDATIONS
Heavy Restrictions Continues - People's Discontent Pervades
2014/January/08) Written by PAEK Chang-ryong, a defector reporter.It i...
＜Inside N. Korea＞ "Show me your texts and photos": Strict Censorship of Cell Phones Comes with Threat of Death Penalty
The Kim Jong-un regime is censoring the country's cell phones with unp...
COVID-19 and the Military (Part 2): “1 Thermometer Per Company”...Soldiers and Families Struggle to Cope with Harsh Military Quarantine Measures
As the military is a group where many people live together for...
Column –Voices from inside N.Korea, ISHIMARU Jiro
Among East Asian countries, only the people of North Korea have been l...
Profiles - ASIAPRESS N.Korea Reporting Team
Ishimaru Jiro Ishimaru was born in 1962 in Osaka, Japan. He is the Osa...
＜Latest Photo Report＞ Scenes of North Korea Captured by Super Telephoto Lens (2) People Trapped in a "Cage” of Their Own Construction [ISHIMARU Jiro]
North Korea continues to stubbornly maintain its “national isolation”...