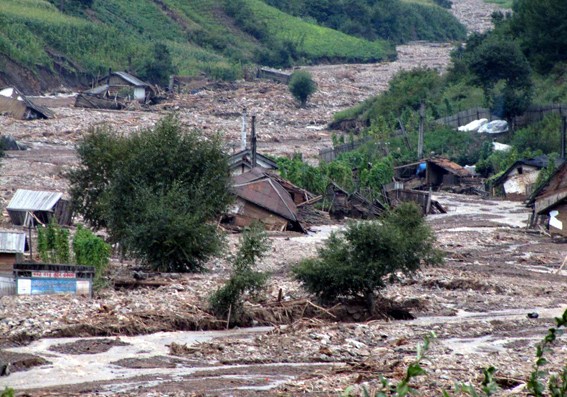 A whole village disappeared under a landslide. Quoted from “Nae Nara (My country),” a propaganda outlet of North Korea

North Korea’s sabre rattling continues to heighten tensions in the region. While missile launches and nuclear tests stoke international fears of North Korean aggression, domestically they are claimed as achievements of the leadership and used for propaganda purposes. Despite these successes, North Korean authorities are beefing up internal security and appear focused on regime stability. The North Korean people meanwhile, appear indifferent to the government’s efforts, expressing discontent at state shortcomings.

In mid September, ASIAPRESS discussed these matters with two North Koreans living in the northern border area. The first interview was with a resident near the Sino-North Korean border in Yanggang Province. (Kang Ji-won/Paek Chang-ryong)

◆ “I felt a strong tremble, and cracks ran along the sides of buildings”

Reporter: Did you feel anything around the time of the nuclear test on September 9?

Resident: Several apartments 1km away from my house had cracks in the walls and broken windows. People said that things were shaking as though a train was going by. Some people at the market place said they felt the earth quake; others don’t remember such things. I didn’t feel anything, which may be due to the fact that I live in a bungalow.

Resident: Well, it’s as propaganda (as tribute to the leader’s greatness). Local congregations are arranged for the purpose of informing the people that General (Kim Jong-un) has developed this weaponry. The nuclear test is a warning to enemies not to provoke. But it doesn’t matter to us whether we have nukes or not.

*The North Korean media claims that the country has a powerful strategic submarine-based ballistic missile, developed under the direct guidance and instruction of Comrade Kim Jong-un
Related Article: Enormous Flood Damage at Tumen River Basin, Outcry over No Relief Efforts by Government 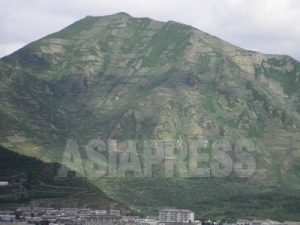 Few trees can be seen on the peak of a mountain in Musan County. In this area the flood damage was severe. Excessive forest clearing exacerbated the damage. Taken by ASIAPRESS on May 2010

Reporter: What are your thoughts on the nuclear bomb?

Resident: Here (North Korea), we say, “Nukes can break the earth.” This is one of General Kim Jong-il’s sayings and has been repeated at local meetings since. People also often say, “The earth can’t exist without North Korea.”

Reporter: Is that what happens? Do the nukes break the earth?

Resident: We don’t know. We know about the missile launches because they publish photos after it happens, but what do we actually know about the nuclear tests? We are just told: “It succeeded’” or “It was powerful.” We don’t really care whether they launch missiles or not. We care more about making a living. People ask, “If they can spend so much on nuclear tests and missiles launches why don’t they distribute rations?” 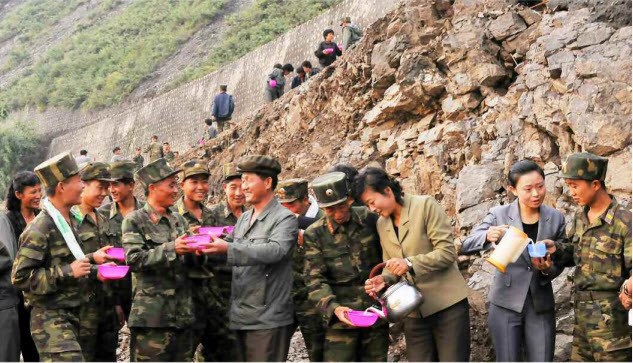 Photo of propaganda with the explanation: The unity of the people and soldiers are absorbed in restoration work. From Rodong Shinmun on September 18.

Reporter: Do you know about the flood damage in North Hamkyung Province?

Resident: Yes. Rumor has it that many people died along the Tumen river basin. I’ve heard that in China they were picking corpses out of the river and later returned them to North Korea. Many people are still missing. Others have lost their homes; swept away in the flood. This happens every year. The rainy season brings death and destruction.
Related Article: People believe that the sanction should hit hard on Kim Jong-un and the high ranks, but inevitably it is hitting on people’s lives as well……

Reporter: Is the North Hamkyung Province government asking for anything to help with the flood damage?

Resident: They’ve made several demands of the people. It most likely differs from village to village, but in our region the local authorities were demanding CNY50 per household. That amount may not be a big deal for party officials and rich people, but ordinary people are feeling the pinch. CNY50 is enough to get you more than a 10 kg bag of rice. If I had enough money, I’d be willing to help. But these demands make things really tough.

【Related Article】
◆ Ordinary N.Koreans have, “No Interest” and “No Expectations” about the Worker`s Party Congress -Only Hope Is “Opening up N.Korea”
◆ ＜Inside N.Korea＞ Hunt for defectors resumed
◆ ＜Interview with N.Korean People＞ Defection of Thae Yong-ho, the minister at NK mission in London, is “natural”

Facebook Twitter はてブ Pocket Feedly
RECOMMENDATIONS
Kim Jong-un's Starving Soldiers - "Just a spoonful of oil for me..." A soldier pleads for grace
2014/January/24 Written by PAEK Chang-ryong, a defector reporter."Just...
＜Inside N. Korea＞ More Elderly and Children Begging in the Streets…Girls at Greater Risk of Sexual Abuse
The population of vagrants, known as "kochebi," has been on the rise ...
＜N.Korea Crisis＞ Why is there a Food Shortage Crisis in the Breadbasket Region of Hwanghae? (PART1)
Written by LEE Jin-su2012/May/07 Possible reasons other than a simple ...
＜N.Korea photo report＞A Look at North Korea's Impoverished Rural Women (4) 'People are working just to be robbed' (Photo 5)
◆Excessive quotas hurting farmers North Korea still employs collective...
〈Photo Report 4〉Inspection At The Metro Station Entrance - "No Shabby Cloths, No Large Luggage!"
<Photo Report>- 4 Inspection At The Metro Station Entrance - "No...
＜Inside N.Korea＞ Expansion of the market economy as the driving force behind social transformation--based on sources from inside N.Korea. (PART6) Collapse of the food rationing system weakened control over the people. by ISHIMARU Jiro
2016/Dec/27 5 Social transformation caused by the expansion of the ma...