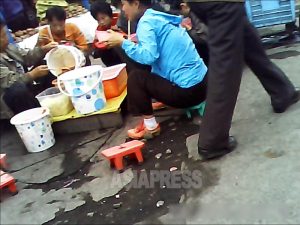 Residents purchasing and eating food at an open-air restaurant in a market. Taken in Sunam Market, Chongjin City by Baek Hyang, September 2013 (ASIAPRESS)

It is unknown at this stage whether the authorities' ban on private restaurant operations has been implemented nationwide. As the market economy is expanding, private businesses such as restaurants are growing. At the same time though, service companies officially affiliated with state institutions are being established by the donju, a newly emerging class of wealthy merchants that competes with private business owners.

It seems that the purpose of the government’s recent measures is to prevent private individuals from owning the means of production and from building private capital. Despite the fact that privately operated restaurants are small in scale, the government is fearful of the potential growth of private capital and is acting decisively in order to protect the interests of the state institutions and donju.

1 2
Facebook Twitter はてブ Pocket Feedly
RECOMMENDATIONS
＜Inside N. Korea＞ ‘Made in Kaesong’ is North Korea’s hottest brand ... unauthorized operations continue at the Kaesong Industrial Complex
In February 2016, it was revealed that factories within the Kaesong In...
COVID-19 and the Military (Part 2): “1 Thermometer Per Company”...Soldiers and Families Struggle to Cope with Harsh Military Quarantine Measures
As the military is a group where many people live together for...
The Firing Squad Executions of N.Korean Entertainers - N.Korean State's Crackdown on "Political Videos" (PART1)
2013/November/17 ISHIMARU JiroNews of The Firing Squad Execution case ...
＜Inside N. Korea＞ “People are starving”: South to Send Support...But Will Food Reach Those Most in Need?
◆ Exploited citizens going hungry The World Food Program (WFP) and oth...
＜Inside North Korea＞ Fare Hikes As Oil Prices Rise
The United Nations has imposed a full range of economic sanctions Nor...
＜A Look at the Latest in N. Korean TV＞ Regime Introduces New TV Channels to Combat the Popularity of K-Dramas
The Kim Jong-un regime has long waged a crackdown on foreign media bei...
Rising discontent as control reinforced to prepare the 7th Workers Party Conference in May… Forced labor to the runaways from their work places and coerced savings to banks…
Declaring nationwide 70 days battle (*1) to prepare the Workers’ Party...
＜Inside N. Korea＞ A Look at Korean People’s Army Recruitment through Secretly Obtained Documents (Part 1): 13 Years of Stolen Youth
Through a reporting partner in North Korea, ASIAPRESS recently acquir...
Chang Jeong-gil on Pyongyang's Kangdong County
In the spring of 2008, the Rimjin-gang editorial staff asked our Nort...
Continuous Shipwrecks of N.Korean Fishing Boats Involving Inexperienced Soldier-fishermen
2016/January/06Edit by KANG Ji-won, defector reporter, and ISHIMARU Ji...