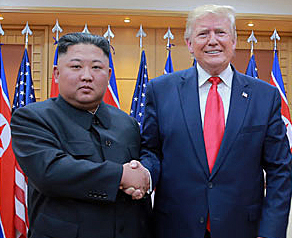 ◆ Lessons learned from the disappointing failure of Hanoi

Kim Jong-un and President Trump surprised the world by meeting on June 30 at the truce village of Panmunjom. So how have North Koreans been reacting to the meeting? We asked multiple reporting partners in the North to describe the mood of the country. (Kang Ji-won/ISHIMARU Jiro)

North Korean state media first reported on the meeting at Panmunjom on July 1. The tone of the reports, however, seemed far less enthusiastic, in comparison to those released following the inter-Korean summit in April last year or the first meeting with President Trump last June. Reportedly, the authorities are holding back so as to temper the nation’s expectations.

A reporting partner living in Ryanggang Province said, “There was a TV broadcast at 9 a.m. on July 1, but there was no advance notice given for us to gather to watch it. Ordinary people say they want the sanctions to be relaxed for our lives to get better, but nobody expects for this to happen. This is because they were heavily disappointed when the talks with Trump in Hanoi failed.”

◆ Party official: “Nothing changes- even when we meet with Trump”

“On the same day there was a meeting of local party officials to discuss city beautification projects, the status of construction at Samjiyeon, and support for the meeting at Panmunjom. Referring to the talks, the officials said, ‘Nothing will change despite meetings with Trump or Moon Jae-in. We cannot afford to indulge in fantasies and must advance through our own strength. This message must be stressed to institutions, state enterprises, and ordinary citizens.’”

On the other hand, the reporting partner said some officials spoke glowingly to promote Kim Jong-un’s authority. An executive for a trading enterprise in Ryanggang Province told the reporting partner in private, “As Trump asked for it, the Supreme Leader (Kim Jong-un) went to Panmunjom to meet him face to face. For Trump not to be impeached, he wants to maintain good relations with us, even if we do not denuclearize.”

An official of the People’s Committee in Ryanggang Province gave an absurd account of the Panmunjom meeting, saying, “Trump said that he has hung a portrait of our Supreme Leader at the White House. At this latest meeting, Trump said that he will gain the trust of the American people.”
Next page : North Korean citizens react very coldly...

Next Page： ◆ North Korean citizens react very coldly
1 2
Facebook Twitter はてブ Pocket Feedly
RECOMMENDATIONS
"You must start with denuclearization"...S. Korean Media Reports that Xi Pressured Kim to Give up Nukes at January Meeting
◆Recently obtained excerpts of summit suggest Kim disregarded Xi’s gui...
＜Kim Jong-un's visit to China＞ Behind the scenes of smuggling in North Korea
North Korea and China share two rivers as their border: The Amrok-gang...
＜Insider Interview＞How have North Korea’s people viewed the country’s continued missile launches?  With food shortages continuing, their distrust and disinterest in the government is deepening…
The impact of the COVID-19 pandemic and economic sanctions have pushed...
＜Inside N. Korea＞ “Information was sold beforehand to the Americans”...Rumors Spread of Executions as Regime Shifts Responsibility for Failed Hanoi Summit
◆ They say the reason for failure was that “Information was sold to th...
＜North Korea＞ East Coast Ports Closed Again, Fishing Banned for 40 Days Due to Fishermen's Violation of Coronavirus Rules
Chongjin City in North Hamkyung Province is the largest fishing centre...
To Be Honest, the People of N.Korea Couldn't Care Less
Rumours that "One Rocket Launch is Worth Three Years of Food" --- Kim ...