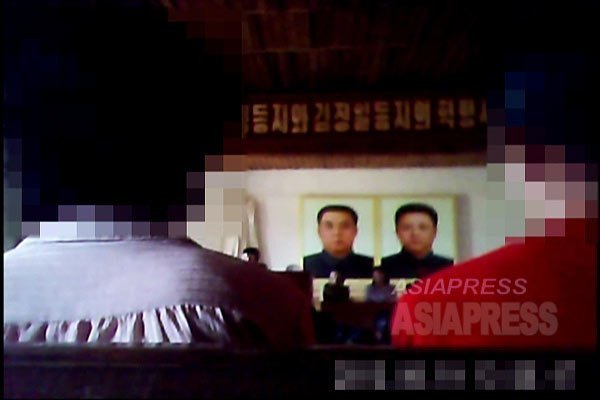 (Photo) In North Korea, fortune-tellers are subject to criminal punishment. This is because worship of anything other than the Kim clan is strictly prohibited. This photograph, taken in summer 2013, shows a political ideology rally held near a provincial city (ASIAPRESS)

According to a reporting partner from Ryanggang Province, fortune-telling is becoming increasingly popular in North Korea, where economic difficulties are becoming ever more serious due to the effect of the coronavirus.

In North Korea, fortune-telling, in addition to all religious activity, is considered to be a ‘superstition’ and is against the law. According to Article 256 of the Criminal Code (revised in 2015), those who receive money or valuables in exchange for engaging in ‘superstitious behavior’ can be sentenced to forced labor for up to 1 year. In serious cases, offenders can even face 3-7 years in prison.

In recent years, with intensified crackdowns, ‘public denouncement rallies’ have been held across the country, with hundreds of residents being mobilized to watch offenders be condemned for their crimes. Despite the dangers, fortune-tellers are thriving in the current atmosphere of anxiety. This phenomenon is explained by the reporting partner in the conversation below:
NextPage: The role of fortune-tellers…

Next Page： ◆ The role of fortune-tellers
1 2
Facebook Twitter はてブ Pocket Feedly
RECOMMENDATIONS
＜Latest Report from N. Korea＞ Regime Aims to Block Coronavirus at Border as Local Hospitals and Populace Remain Woefully Unprepared for Potential Outbreak
The North Korean authorities have announced through state media that t...
＜Inside N. Korea＞Market Price Since Imposition of New Economic Sanction
2017/Jan/17 On 30 November last year, the United Nation Security Coun...
＜Inside N. Korea＞N. Korea’s largest iron mine shutdowns, markets close, and controls intensify daily due to COVID-19 in N. Hamgyong Province’s Musan County
The situation in North Korea is changing by the day as the country’s a...
＜N.Korea photo report＞A Look at North Korea's Impoverished Rural Women (2) "Life is like being a cow on a farm" (Photo 5)
◆Stuck on a farm for a lifetime In North Korea, there is the word ‘non...
＜Inside N. Korea＞ Residents Begin to Panic as Border Shutdown Blocks Chinese Imports and Induces Inflation
◆ “If the blockade continues, there will be panic” In a bid to prevent...
Highly Favored, But Hard to Procure, Pork a Rare Treat in N.Korea
2014/May/06 Written by PAEK Chang-ryong, a defector reporter North Kor...