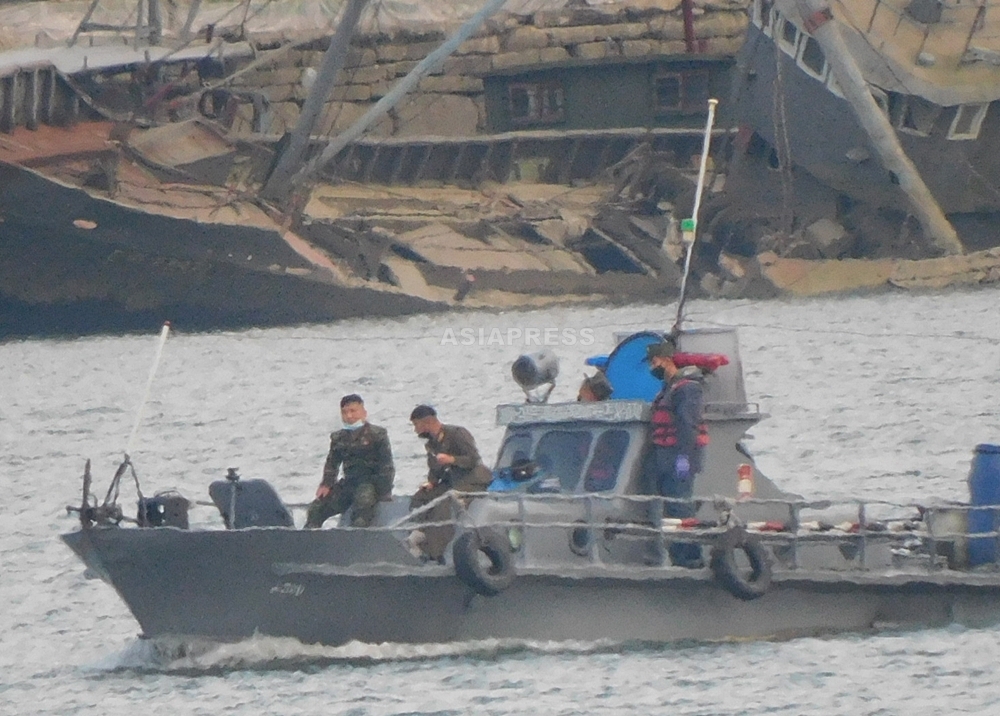 North Korean soldiers patrolling the Yalu River with masks on. The soldiers in the camouflage clothing are border patrol, while those in the brown uniforms are Korean People’s Army soldiers. An old, abandoned boat can be seen in the background. This photo was taken by ASIAPRESS on the Chinese side of the border in July 2020.

According to two ASIAPRESS reporting partners who delivered reports on May 19 and May 20, Hyesan, a major city in Yanggang Province in North Korea’s northern region, was completely locked down on May 14, with people prohibited from leaving their homes. According to the reporting partners, Hyesan’s markets were shut down, and there appears to have deaths among residents who were unable to leave their homes. Apprehension in the city is rising because of the spread of COVID-19 and the lack of food. (KANG Ji-won / ISHIMARU Jiro)

The spread of the COVID-19 pandemic in North Korea has led the Kim Jong-un regime to increase efforts to prevent leaks of information to the outside world, and the authorities have dispatched security officials and cadres to the country’s border with China with a view to strengthen these efforts.

―― We’ve look forward to hearing from you. What does the situation in Hyesan look like?

D:  Hyesan was completely locked down on May 14. I can see a vehicle that detects radio signals parked outside my apartment. It’s there 24 hours a day. The only vehicles on the roads are these kinds of vehicles and military cars. Outside, I can only hear people barking instructions at others about things they shouldn’t do. I’ve heard the Ministry of State Security has been fully mobilized to ensure information (about what’s happening) doesn’t make it to the outside world. I was so scared that I couldn’t deliver my report to ASIAPRESS on time. It’s hard to get a signal on our phones. It’s particularly difficult to call people in Pyongyang.

―― Are people banned from leaving their homes?

D:  The whole place is in an uproar. People don’t know when the lockdown will end. I don’t know what the market prices are because the markets have been closed. In the middle of the night, a neighbor knocked on my door asking for rice. I told them that we could exchange the rice for a household electronic device in their home. If things continue like this, we could all starve. There’s rice in my house, but I’m worried because there’s no wood to burn (in the stove) to make it.

――How is the government responding to the crisis? Are the authorities supplying food and medical supplies?

D:  There’s a new organization called the “emergency quarantine team.” They wear protective clothing and go around to the homes of people with fevers to check whether they are still alive or not. I’ve heard that they’ve imported medicine from China and are distributing it to people who really need it. I don’t know what kind of medicine it is, and I haven’t yet received any.

Also, the local government (the people’s committee) has promised to distribute food, but there’s been nothing yet. I’ve heard there’s almost no reserves of food in the provinces (areas outside of Pyongyang). (The authorities) are saying that people with extra (food) should help everyone get through the crisis, but that’s ridiculous. People will steal food. Everyday, vehicles with speakers blaring propaganda go around telling everyone that “This is an urgent situation, so let’s work together to get through it.”

―― Has anyone died in the city?

D:  Today (May 19), my inminban (people’s unit) reported that a young woman and man had died. I haven’t gone to check myself, so I don’t really know why they died.

Water doesn’t come out of the faucets of our apartment anymore, so we have to go to a well to bring water back up to our homes without making contact with anyone else. However, there was one household that didn’t go out to get water in this way. The “emergency quarantine team” went to check up on them and found that they had all collapsed due to hunger, though they weren’t dead yet. I hear them crying in the middle of the night.

―― Is that because someone has died? Or are they crying because there’s nothing to eat?

D:  I’ve tried knocking on their door, but they didn’t open it because they seem scared about COVID-19.