The Forthcoming Election in North Korea:

March election that sees Kim Jong-un stand for the first time
Heavy security measures are being put in place all over the country in the lead up to North Korea's general elections. The elections, planned for Sunday, 9th March, are for the thirteenth stage of the Supreme People's Assembly (SPA), equivalent to the national parliament of the country. This is the first election since 2009.

According to information given via telephone by our reporting partners in the country's Northern Provinces of North Hamkyung and Ryanggang, there has been sabotage carried out at the polling stations, with notice boards destroyed.

Using a Chinese mobile phone that functions in the Sino-Korea border area, one of our reporting partners, an administrative servant in Ryanggang Province, reported that in the Jongju city of North Pyongan Province, a notice board was taken down and destroyed by an unknown person. After the event, the local chief of the State Security Department (intelligence service/secret police) and security officers were accused of allowing this to happen.

"The case caused a big fuss, currently the polling stations are under 24 hour surveillance. Many people are mobilized for security, regardless of the time, day and night. All are fed up with the job." 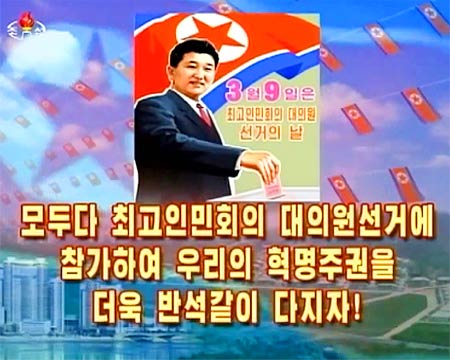 In North Korea, when the election campaign period begins, slogan-boards and posters for the election are put up here and there. These are usually along the lines of;
"We all for vote for aye!" (in the affirmative.)
"Consolidate our revolutionary sovereignty!"

According to our reporting partner, the following slogans can be seen this time around:
"Long live the uninterrupted revolutionary sovereignty that is led by our Dear Comrade Kim Jong-un!".

Patrols are tasked not only with protecting the polling stations, but also with looking after these slogan-boards. Mobilized people from workplaces and the local neighborhood serve as duty guards. It seems that the sabotage case in Jongju has had a wide-ranging affect, as firm commands were issued to other regions to enforce the security of those facilities. 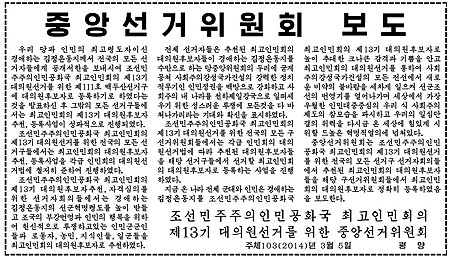 A notice issued by the DPRK Central Election Committee on 5 March:
"The Election Committee announces that Dear Comrade Kim Jong-un has been nominated and registered as a candidate for deputy at Paektusan Constituency No.111 for the election of the deputies to the 13th Supreme People's Assembly. (snip) The military and citizens of the entire country embrace with deep emotions and joyfulness that Dear Comrade Kim Jong-un was honorary co-opted as a deputy. Through the election, we will raise the fire wind for a new leap in all phases of the construction of the socialist state, and open up the prosperous Military First Korea by proclaiming the real figure of the world's most superior Korean style socialist system, at the centre of which is the people. We are now fully filled with the sublime revolutionary enthusiasm." (Rodong Sinmun; 6 March. 2014)

Teams dispatched by the State Security Department for border security were recalled before the election.
Since last December's sudden purge and execution of Jang Song-thaek, former Vice Chairman and number two in the state, heavy control and security measures have been taken in the Sino-North Korean border area. It is reported that units of students from Pyongyang's Political-Military University, and a special security task force assembled to carry out the crackdown have been dispatched en masse to Hyesan city, Ryangang Province. However, these units have now been withdrawn.

In our phone conversation with our reporting partner in the region we were told;
"When the election campaign period is over, they may be deployed to the area again, but for now, all the crackdown teams of the State Security Department have been withdrawn as of the 27th February."

It is presumed that agents of the State Security Department were repositioned from border control duties to election campaign security tasks as the voting day drew nearer.
During the last election campaign, five years ago, graffiti on the signboards was seen on facilities in several regions.

The term a representative of the SPA is in office is five years. Accordingly, Kim Jong-un has been shuffled between supreme positions of state such as the First Secretary of the Korean Workers' Party, the Supreme Commander of the Korean People's Army, and First Chairman of the National Defense Commission, ever since he appeared on the country's political scene following the death of his father and then leader, Kim Jong-il. However, this is his first time being "baptized" in an election.

For Kim, and for the authorities, this election is expected to reach its conclusion without any unplanned events. The elections play the role of justifying Kim Jong-un's regime, demonstrating that "he is a leader chosen by the people," even if it is recognized for most to be simply a ceremonial event.
*** Rimjin-gang

Facebook Twitter はてブ Pocket Feedly
RECOMMENDATIONS
＜Inside North Korea＞ “The 7 Year-Old Sent From God”: Why Fortune-tellers are Thriving Despite Regime Crackdown
According to a reporting partner from Ryanggang Province, fortune-tell...
＜Inside N. Korea＞ Power supply to northern regions cut off due to Samjiyeon construction project
Since late October, the power supply to residents in the northern regi...
Rimjin-gang - Editor's Notes on N.Korean Reporters
All our staff inside North Korea work under assumed names.Any article ...
＜Inside N. Korea＞ 22-Year-Old Man Jumps to his Death Following Arrest For Watching Foreign Film, Leading Bereaved Family to Rise in Protest
◆ Conducting house-to-house investigations without a warrant In North ...
＜Interview with N.Koreans＞ "Is it any better in Kim Jong-un Era? Not at all! Preferential treatment is given to the Party officials by sacrificing the needs of the residents in the regions outside of Pyongyang!"
2015/December/13 Edit by KANG Ji-won, defector reporter, Rimjin-gang &...
＜Inside N.Korea＞ Real Evaluation On Kim Jong-un By His Own People
2017/May/1 While I have worked in journalism specialized in North Kor...