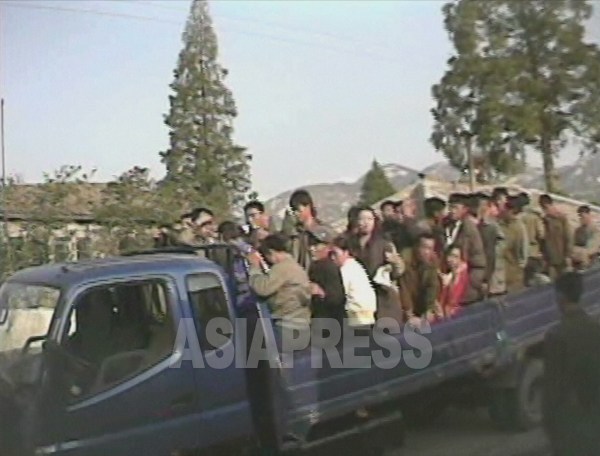 It has been reported that "crowd trials" (public trials), which are openly held in plazas in all parts of North Korea, are frequently taking place. The people put on trial are those who were arrested for non-socialist and anti-socialist acts, and it appears that the aim of the trials is to instill fear in residents to strengthen social control. (Kang Ji-won)

On July 17, a reporting partner residing in North Korea said during a telephone call with ASIAPRESS,

"I heard from a police officer that crowd trials are being carried out across the country and that one will be held soon in ●● City, where I live. On June 29, two men and two women were put on a crowd trial in Rason City."

What is North Korea’s crowd trial?

A crowd trial is a way of judging and executing criminals according to the 'political agenda' of the authorities, rather than provisions stipulated in the constitution and laws. The purpose is to create a sense of fear among as many residents as possible. It is characterized by the gathering of a crowd and is held in provinces, cities, towns, and villages all around the country. Although the reporting partners also mentioned the terms ‘mass trial’ and ’public trial’, North Koreans generally use all of these words to refer to the same thing.
Next page: Mobilization in local communities and the workplace...

Next Page
1 2
Facebook Twitter はてブ Pocket Feedly
RECOMMENDATIONS
＜Inside N. Korea＞ Nationwide Medicine Shortage Results in Rising Deaths Among Infants and Elderly
Since October, when the weather has become colder in North Korea, the ...
[Video Report] Fleeing back alley vendors by cracking down
Reporter, Koo Gwang-ho of ASIAPRESS, recorded a video on street vendor...
＜Interview with a N. Korean Woman＞ "I live with goats and pigs in my apartment" The desperation driving people to raising animals at home
Many North Korean city dwellers are raising goats, pigs and chickens i...
＜Inside N. Korea＞ Facing the spread of starvation, N. Korean authorities distribute food for free in some urban areas
North Korean authorities distributed food to people in a number of cit...
MAP
Rimjin-gang COVERAGE MAP - DPRK and Chinese border zone...
＜Inside N. Korea＞ Expansion of the market economy as the driving force behind social transformation--based on sources from inside N.Korea. (PART4) Marketization leads to rapid development of the transport system. by ISHIMARU Jiro
2016/Dec/22 3-2 The emergence of a marketized transport system The ma...