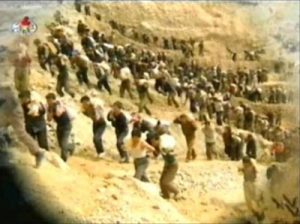 ◆What are the 'Storm Troops'?

The construction workers mobilized for large-scale national construction projects are called ‘storm troops'. Workers are selected to be storm troops by superiors at their workplaces or by those within the Party.

Storm troops are dispatched for the construction of power plants, apartment blocks, roads, and railways. The storm troop units are essentially organized to imitate the army but without providing compensation.

The storm troop unit for the Samjiyeon construction project was named the '2.16 Division' after Kim Jong-il's birthday and organized to have ‘brigades’ set up under it in each province- the 'South Pyongan Brigade of the 2.16 Division' for example. These brigades also have battalions set up under them.

“Accommodation centers are built at construction sites for each province, where storm troops lodge together. Meals are provided, with food requisitioned from across the country. Construction workers sleep and work on-site and rotate out every 6 months. Local housewives, meanwhile, are mobilized frequently for road maintenance but cannot reside at the construction sites. Citizens who want to avoid forced mobilization have to pay a bribe,” explained another reporting partner from Samjiyeon.

Many people consider the bribery to be unfair because only those who have money can escape mobilization. Those who pay to avoid it can use the freedom to maintain private businesses and earn more money. Meanwhile, those who cannot pay to avoid the service are denied the opportunity to make money through private market activities.

How many people have been mobilized for the Samjiyeon construction project? Though the exact numbers are unknown, it seems there are tens of thousands of workers mobilized at at any given time. This takes into account the fact that workers are mobilized from all provinces and that construction brigades are also deployed by the military, in addition to the 'storm troops'.

Currently, authorities are focusing on construction of a railway  between Hyesan and Samjiyeon. The construction started during the Kim Jong-il era but completion was delayed considerably due to a lack of materials and labor.

The Kim Jong-un regime has been pushing to complete the project for the past two years. However, due to low-quality construction, which was criticized by Kim Jong-un during a visit to the site in July, much of the work had to be redone.

"In Hyesan City, sections of the project are assigned to each institution and enterprise, where they must place gravel on the tracks and rebuild stone walls. We must also rebuild the roadbed, but progress on that has lagged behind for many years,” said a Hyesan-based reporting partner.

Next Page： ◆'Storm troops' hidden from President Moon
1 2 3
Facebook Twitter はてブ Pocket Feedly
RECOMMENDATIONS
Living in Pyongyang - The Real Story (3) Pyongyang City Shrinking
2013/August/11 Speaker： GU Gwang-ho,Rimjin-gang reporter Editors：ISHIM...
Love Thy Neighbor: N.Korean Public Confused as Regime Prohibits Criticism of China
◆ Is China not the “1,000 year-old enemy”? Since mid-January, the Nort...
＜Inside N. Korea＞ Markets in Turmoil Across the Country: Households Register to Receive Chinese Aid and Trade Grinds to Halt as Food Prices Hit Yearly High
Turmoil is spreading in markets across North Korea. The prices of sta...
＜Inside N. Korea＞ "Show me your texts and photos": Strict Censorship of Cell Phones Comes with Threat of Death Penalty
The Kim Jong-un regime is censoring the country's cell phones with unp...
＜Inside N. Korea＞Supply of COVID-19 Disinfectant and Protective Clothing Improves…. “If you eat garlic, you won't be infected,” ssayid rresidents.
"In our country, instead of using disinfectants, we burn mugwort plan...
Was the Incineration of a Shot S. Korean Official in Accordance with Kim Jong-un’s Instructions?
The shocking incident took place on September 22nd. A civil servant i...
[Video Report] Why Do N.Korean Women Care About Looks? "I want to get attention from the guys.”
The first scene of the video was filmed in Wonsan City, Kangwon Provin...
Rimjin-gang Report - Pyongyang Construction Sites to Build 100,000 Apartments (2011) North Korea
In the capital city Pyongyang, a fully-fledged construction boom has b...
＜Inside N. Korea＞ Put On Ice: New Year Performances in Samjiyon Scrapped after Power Cuts Turn Apartments into “Freezers”
The New Year’s Day art performances, which were being prepared extensi...
＜Inside N. Korea＞ Sexting Sting: Roadside Cell Phone Inspections Cause Embarrassment as Police Probe Data and Texts
Mobile phone usage has expanded greatly in North Korea, with 5 million...