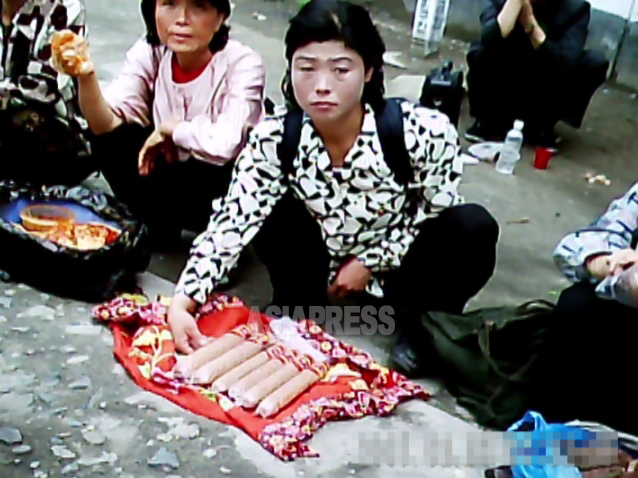 What about the impact of the sanctions in Pyongyang, where the rich and privileged are concentrated?

A Chinese reporting partner for ASIAPRESS met with a Pyongyang businessman in China last November to learn more about the situation in the capital. The businessmen visits China several times a year to buy wallets and bags for resale in Pyongyang.

Meeting in a restaurant late at night to avoid prying eyes, the businessman said, “There are a lot of export companies that have gone bankrupt. Many of the newly-rich, private investors and traditionally wealthy elite are poor now. Especially those that were involved in trading coal and other minerals. Sales are slow in Pyongyang as the flow of money is totally blocked. Many vendors have stopped coming to the market altogether because they will make a loss if they have to pay the tax for vendors. My acquaintances can no longer afford to take taxis because of their loss in business. All in all, it can be said that the income of common people has been cut by about half.”

Who are the ‘newly-rich private investors’ that the Pyongyang businessman referred to and how did they come to prominence? This can be best explained by examining North Korea’s top foreign currency earner, the coal industry.

There are many coal mines in North Korea where high-quality anthracite is excavated. Since the 1980’s, however, operations at these sites were significantly reduced due to the country’s crippled economy. In the early 2000’s, however, operations at these sites began to return to their original productivity thanks to investment from new sources as, for the first time, private individuals were allowed to invest in the market economy. These private investors, labeled the kiji, brought back mining at neglected sites across the country, efficiently unearthing iron before selling it on to state-authorized trading companies for export to China. 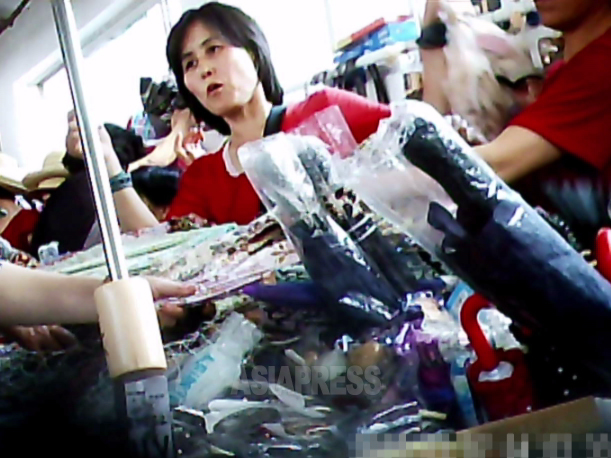 (Photo) A scene from Moran Market in central Pyongyang. The women run 80 centimeter-wide stalls, where they sell products such as Chinese umbrellas. Photograph taken in July 2011 by Koo Kwang-ho (ASIAPRESS)

Since private companies are illegal in North Korea, kiji used bribes to secure official permits which would allow them to operate under the banner of state-owned enterprises. In practical terms, however, they were private companies, usually with 30-200 employees. Bribes and wages for workers were the only costs of entry into the market, with profits going straight into the pockets of the kiji. These private enterprises would go on to have great success thanks to a simultaneous boom in coal exports to China, with the kiji becoming subjects of much envy. Kiji would repeat this success in various other fields, reaping profits in the fishing, transportation, and gold mining industries.

In 2016, before the sanctions were tightened, North Korea exported about $11.8 billion worth of coal to China. This amounted to 45 percent of all exports to China. One year later, however, North Korea would lose all of this trade, with China abiding by the UN Security Council’s ban on coal imports from the country.

It was not just coal miners or kiji who felt the impact of this ban. Entire towns, such as those in Musan County, are set up to support the mining industry, with mechanics, electricians, shippers, and other professions all depending upon work at the mines to support their businesses as well. All in all, it can be estimated that close to a million people are engaged in coal-related businesses across the country. Now, with coal exports stopped, these people’s incomes have plummeted as well.

A reporting partner in South Pyongan Province, where large coal mines are also located, described how, as the sanctions have taken effect, markets around the coal mines have become stagnant, with the flow of goods and money totally blocked. In addition, the partner reported that many of the private companies which were running the mines have gone bankrupt and have simply disappeared.

The reporting partner described local sentiment, further stating, “The residents say that sanctions have turned the kiji into beggars and that Kim Jong-un has had to approach South Korea because of the loss of revenue from coal. That’s the gossip in the streets.”

1 2 3 4 5
Facebook Twitter はてブ Pocket Feedly
RECOMMENDATIONS
＜Inside N. Korea＞ Regime Strikes Gold: Authorities Lock Horns with Locals in Sudden Gold Rush
The discovery of large amounts of gold dust in a northern river is sai...
＜Inside N. Korea＞Death Toll Rising: The Serious Humanitarian Crisis in North Korea is a Man-made Disaster. ISHIMARU Jiro
People are dying. People are dying for lack of food and medicine. Thi...
“Oppa” is Outlawed: Top-Secret Documents Detail Kim Jong-un’s Direct Orders to Eliminate S. Korean Cultural Influence
Kim Jong-un is fomenting hatred of South Korea within the country, ord...
＜Inside N. Korea＞ Penniless Protectors: Underfunded Orphanages Struggle to House N. Korea’s Homeless Children
It was not long ago when homeless children, known as ‘Kotjebi’, were a...
Kim Jong-un’s Furious Response to the Defection of 13 Restaurant staff
On April 8, the South Korean Ministry of Unification announced that 13...
Rimjin-gang - Editor's Notes on N.Korean Reporters
All our staff inside North Korea work under assumed names.Any article ...
＜Inside N. Korea＞ Memory Fades: 7 years after his death, N. Korea scales back Kim Jong-il commemorations
◆ Purposely evoking the image of Kim Jong-il December 17th marked the ...
Japan-N. Korea Ties Severed by the Coronavirus: Contact Lost with Relatives for Over a Year due to Postal Service Stop ISHIMARU Jiro
“The last letter I received was in January last year, and I haven’t re...
＜Interview with N.Koreans＞ "Is it any better in Kim Jong-un Era? Not at all! Preferential treatment is given to the Party officials by sacrificing the needs of the residents in the regions outside of Pyongyang!"
2015/December/13 Edit by KANG Ji-won, defector reporter, Rimjin-gang &...
N.Korean People lament, “We’ll be done if Chinese enforce the sanctions”
2016/2/5The international community is calling for further sanctions o...