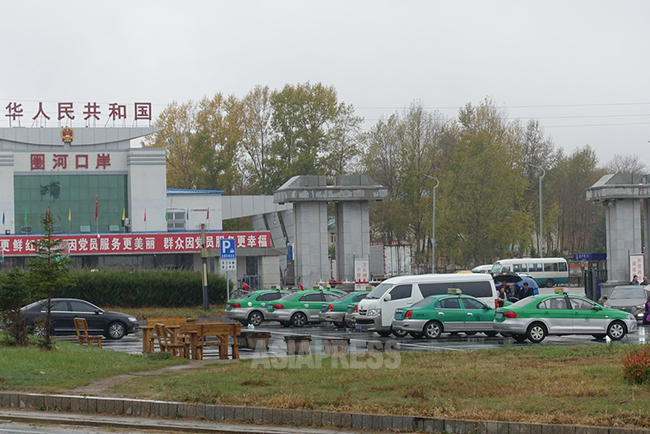 All quiet at the Kwon-ha Trading District in Jilin Province. In 2016, trucks would go through the district to connect with the special economic zone of North Hamkyung Province. In recent years, only the odd taxi can be seen at the district. Photographed in October 2017 by ISHIMARU Jiro

Many of the North's trade companies are under the administration of the North Korean People's Army, the Workers' Party, and the Ministry of Security (police). Among these administrative bodies, however, the most important and powerful is an organization called “Room 39”. This special office is responsible for raising funds for the regime through various trade and financial operations. It is also in charge of dispatching workers to foreign countries.

So, how is Room 39 being impacted by the sanctions? To find out, ASIAPRESS began an investigation in March of last year with the help of a reporting partner living in the northern region of the country. As the reporting partner is a member of the Worker’s Party and a mid-level executive in a small company, he has several connections in the business world that served to shed some light on the dealings of the secretive organization.

Under Room 39 there are many bureaus, one of which is the “Paradise” Guidance Bureau. It is this bureau that oversees the “Peony Company”, a company headquartered in Pyongyang and with a branch office in Chongjin City, the third largest city in North Korea. Close to the Chinese border and facing the East Sea, the company’s branch office deals with exporting seafood, minerals, and clothing to China. In addition, the company expanded its operations to become a distribution hub for imported Chinese products to be sent across the country. Beginning his research, the reporting partner traveled to Chongjin to learn more about this particular enterprise of Room 39.

In Chongjin, the reporting partner was able to meet with a senior employee of the company, finding out that the company’s Chongjin operations had been suspended, with the company’s office rented out to a local merchant for use as a warehouse. In addition, the reporting partner was told that the branch office had 35 full-time employees, with many sub-contracted staff as well. These subcontractors, however, were employed solely to collect medicinal herbs to be exported to China and many of them were let go after the sanctions took effect.

The senior employee told the reporting partner, "Up until 2018, I would receive 50 kilograms of white rice and 500 Chinese yuan (about 80,000 South Korean won) per month. As official trade with China is totally off the cards, I have an arrangement with a chinese merchant to sell luxury Chinese-made products such as TVs, electric rice cookers, water tanks, and beds to North Korea’s wealthy elite on his behalf. I have to give back 1000 Chinese yuan (about 160,000 South Korean won) of the profits each month to the Chinese merchant. I am allowed to keep any profit made over that but if I do not make 1000 yuan in a month, I will lose the job.”
Next page>>>

1 2 3 4 5
Facebook Twitter はてブ Pocket Feedly
RECOMMENDATIONS
＜Inside N. Korea＞ Truck falls into reservoir due to heavy snow, leaving 19 dead in the northern part of Ryanggang Province (a photo and a map)
2016/Nov/28 On November 18, an ASIAPRESS reporting partner in the nort...
＜Photo Report＞ Abandoned Elderly (PART3) Collapsed Social Welfare System Has Left the Elderly on the Streets.
2016/Oct/3 In Japan a growing number of people have become concerned ...
＜Inside N.Korea＞ Tighter Control of Inter-provincial Movement: Investigating corruption in Hoeryong City’s People’s Security Station
On August 2, an ASIAPRESS reporting partner in North Hamkyung Provinc...
＜Inside N. Korea＞ Truly Powerless: Residential Access to Electricity and Water Restricted...Has Border Blockade Paralyzed Power Plant Repairs?
From around May, the lives of North Korean urban residents have been d...
With time running out for the aging families of Japanese abductees, the Abe administration must lay out a roadmap for settlement talks with North Korea (ISHIMARU Jiro)
January 12 marked the 59th birthday of Keiko Arimoto (有本恵子), a Japanes...
＜N.Korea Crisis＞ Why is there a Food Shortage Crisis in the Breadbasket Region of Hwanghae? (PART1)
Written by LEE Jin-su2012/May/07 Possible reasons other than a simple ...
cover page
cover page               Rimjin-gang - News From Inside North Kore...
＜Inside N. Korea＞ Arson Suspected After Fire Breaks Out the Day Before Regime’s Rubber Stamp Election
◆Fire breaks out amid tight security ahead of Supreme People’s Assembl...
＜Inside N. Korea＞ Tension Mounts as Regime Regulates Markets, Confiscates Stocks, and Slanders Price Gouging Shopkeepers
To prevent the spread of novel coronavirus to North Korea, the Kim Jon...
Kim Jong-un's Starving Soldiers - "Just a spoonful of oil for me..." A soldier pleads for grace
2014/January/24 Written by PAEK Chang-ryong, a defector reporter."Just...