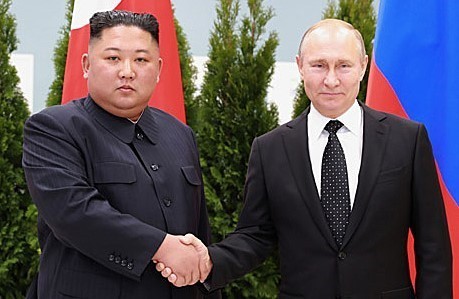 On April 27, Kim Jong-un visited Vladivostok for his first summit with Putin. As originally broadcast by Chosun Central Broadcasting.

A reporting partner living close to the border with Russia, in North Hamkyung Province, said on May 2 that, since Kim Jong-un’s summit with Putin in late April, there has been a sudden increase in expectations among traders and the public of Russian support and economic cooperation.

The reporting partner said, “There are many people who expect to receive fuel, fertilizer, pesticide, and food from Russia, as the Rodong Newspaper and other media reported that Kim Jong-un’s visit to Russia was fruitful. There are also many trading companies that are pinning their hopes on Russia’s massive investment, support, and trade expansion.”

Behind this ‘rise in Russian stock’ is the lasting sense of disappointment felt in the wake of the fruitless Hanoi summit with the U.S. in late February. The outlook for the easing of economic sanctions is still not looking good- with China, the country which North Korea relies on for 90% of its trade, making it clear that it will continue to abide by the sanctions.

Since early March, shortly after the failed Hanoi summit, China has tightened its customs inspections and, in addition, implemented a thorough crackdown on smuggling at its border. North Korea’s state-owned trading companies are at an impasse, beleaguered by the serious slump in trade and joint ventures.

Next page : Making Trade Offers to Even Russian Tourists...

Next Page： ◆ Making Trade Offers to Even Russian Tourists
1 2
Facebook Twitter はてブ Pocket Feedly
RECOMMENDATIONS
＜Inside N.Korea＞ Hunger spreads in rural areas in April; farmers run out of food, and people in cities have no cash income… The authorities implement weak measures to resolve these issues
Starting in April North Korea faces a major problem as the number of ...
＜PHOTO REPORT＞Sino - N.Korea Border ［PART2］China Frustrated With Drug Smuggling From N.Korea
2014/June/12 Report/Photo:KANG Ji-won Edit: PAEK Chang-ryong (Both mem...
＜Inside N. Korea＞ Birthday Ban: Why N. Koreans were forbidden from raising a glass to Kim Jong-un
2019/Jan/10 ◆ Is Kim Jong-un portraying himself as a ‘humble’ leader?...
＜Inside N. Korea＞ The Deteriorating Plight of the People (3) Economy Reaches State of Panic [ISHIMARU Jiro]
In June, the economic turmoil began to take on the appearance of panic...
★★★ASIAPRESS ARCHIVE SERVICE-Licensing Fee
LICENSING FEE The client shall agree to all articles of the Conditions...
[Video Report] Wholesale Black Market Prospering with Prohibited Goods
The black market in North Korea–that was once small-scale and primitiv...