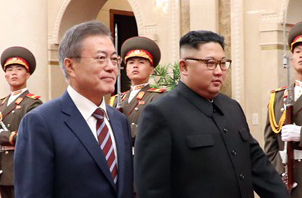 North Korea continues to test its short-range missiles, citing the recently-completed military exercises between the U.S. and South Korea as justification. But how did the regime justify the missile tests to its own people and what was the reaction of residents and officials to the tests?

In the first half of August, senior Workers’ Party officials were reportedly lectured on the U.S.-ROK joint military exercises and told to “Uphold the dignity of socialism by resolutely opposing [the drills].”

A reporting partner, living in an urban area of North Hamkyung Province, met with a top official of the Workers’ Party who personally attended the meeting.

According to the official, “The party secretary spoke first at the meeting, saying, ‘Supreme Leader Kim Jong-un has demonstrated his strong will through the new weapon development tests, responding to the U.S.-ROK military drills with an ultra-hard stance. Because the Supreme Leader is leading from our front, if the enemy takes one step forward, we must move forward by ten steps.’”

The official continued, “The Party Secretary asserted that ‘Although our situation is poor at the moment, we will succeed soon because of our Supreme Leader’s excellent diplomatic skills.’ On the other hand though, we were told to bear responsibility as well, by “implementing the concept of self-reliance to overcome any difficulties.’”
Next page : South Korea’s Moon Jae-in labeled a coward...