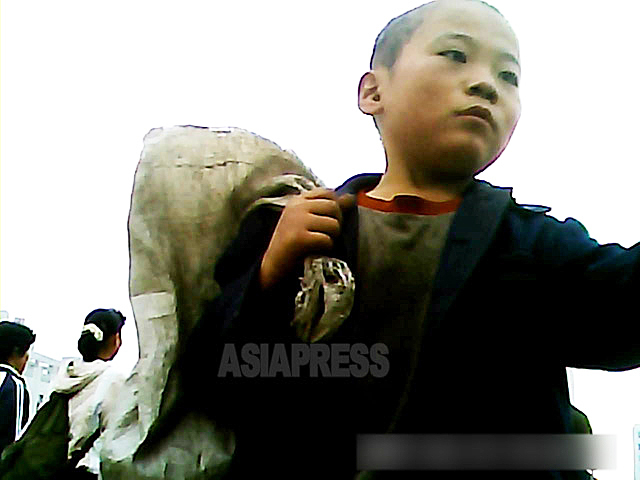 (Photo) A boy carries a sack and wanders around a market. There are many similarly impoverished people with poor hygiene. Photographed in Pyongsong, South Pyongan Province in September, 2013 by ASIAPRESS

The North Korean authorities have announced through state media that the transmission of the deadly new coronavirus has spread from China to Japan, South Korea, and the United States.

The Rodong Sinmun, the official newspaper of the Workers’ Party of Korea, claimed on January 28 that authorities are taking “emergency measures in the health sector.” Though what is the reality inside North Korea?

Hyesan, Ryanggang Province, is situated on the border with China and is connected by bridge to the Chinese town of Changbai, Jilin Province. A reporting parting living in Hyesan, gathered information on January 27 and 28, and explained the domestic situation as following:

“Television announcements are emphasizing the need to wash hands and wear masks. But there are no health officers going around the community to explain the dangers of the virus or give instructions on preventing infection. All that we have been told is to go to the hospital if we have a fever.”

Another reporting partner in Hyesan City was quite shocked upon hearing the severe effects of the coronavirus, asking, “Is the virus really fatal? Are there many dead in China?” The reporting partner was also unaware of the strict control of movement put in place by the Chinese state to quarantine the virus.

The bridge across the border between Hyesan City and Changbai appears to be completely blocked. The reporting partner explained, “Only those who were on business trips in Changbai were permitted to return to North Korea. Chinese nationals are being blocked from entering the country. At this point, though, the movement of North Korean citizens inside the country is not being particularly controlled.”
Next page :Rumors spread of infected people…

Next Page： ◆ Rumors spread of infected people, though populace are too poor to buy masks
1 2
Facebook Twitter はてブ Pocket Feedly
RECOMMENDATIONS
cover page
cover page               Rimjin-gang - News From Inside North Kore...
＜Inside N. Korea＞ Fear and Tension among the Police: Authorities Order the Eradication of Bribery With Threats of Punishing Officers and Their Families
The North Korean authorities have decided to strengthen punishments fo...
＜Inside N. Korea＞ High school students enter farm fields to steal crops to survive…Government officials check whereabouts of students who miss class
Amid the rise in North Koreans in urban areas suffering from poverty d...
＜Interview with a North Korean Woman (1) ＞ Why the COVID Situation is Causing a Surge in “Black-Market Abortions”
The plight of North Korean residents is worsening. In order to block t...
＜Photo Report on N.Korea＞ Ex-Soldier Confesses “War Is Impossible for Hungry People’s Army!”
2017/Apr/24 The duty for a newly conscripted North Korean soldier is ...
More Kotchebi Homeless Children Under the Kim Jong-un Regime
2014/February/05 Written by PAEK Chang-ryong, a defector reporterTwo y...