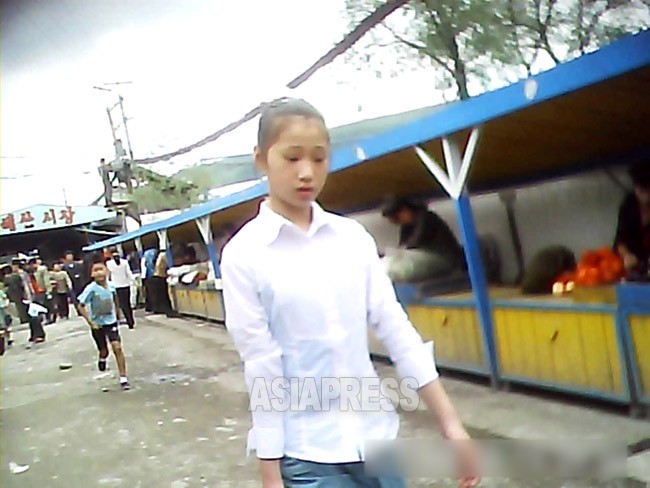 The entrance to Hyesan Market, where Chinese goods are said to be in short supply due to the border blockade. Photographed in July 2013 by ASIAPRESS

To prevent the spread of novel coronavirus to North Korea, the Kim Jong-un regime has completely sealed the border with China since late January. In the aftermath, markets across various parts of the country have seen prices soar due to a shortage of Chinese goods. Now, with authorities responding with forced price cuts, tension is building rapidly. (Kang Ji-won)

On February 7, ASIAPRESS spoke with a businesswoman in Hyesan, Ryanggang Province, the site of much trade with China’s Jilin Province.

“The number of traders has dropped by half. Industrially produced goods such as shoes, clothes, utensils, etc are not coming in from China, so there are no products to sell and prices are skyrocketing. The market is quiet because few customers come to buy anything other than groceries,” the woman said.

For markets in cities further away from the border, the situation is said to be even more severe.

Merchants are in a very difficult position as the authorities, concerned about the soaring prices, have forced them to cut prices. The authorities have especially intervened in the rice market.

Next page :According to another reporting partner...

Next Page
1 2
Facebook Twitter はてブ Pocket Feedly
RECOMMENDATIONS
N.Korean Reporter, LEE Jun story
Many North Korean refugees live in hiding in the Chinese border city o...
＜Inside N. Korea＞ Theft of car parts is rampant in North Korea. Thieves immobilize vehicles by stealing tires, mirrors to sell on the black market...Few car parts make it over the border due to the pandemic
Throughout North Korea, the stealing of vehicle parts, including the m...
＜Inside N. Korea＞ Missing Medicine: Country on Verge of "Medical System Collapse" due to Rapid Depletion and Blocked Imports of Drugs
◆In addition to the depletion of Chinese products, there is a ban on a...
＜Inside N. Korea＞ Hundreds mobilize in Hyesan to rally against fortune-telling and drug use
In Hyesan, North Yanggang province, fortune-tellers and drug users wer...
＜Inside N.Korea＞ Pregnant Woman Killed By Heavy Truck (2 Photos)
2017/Nov/13 Multiple reporting partners reported on a fatal traffic ac...
COVID-19 and the Military (Part 1): Starving Soldiers Shoot Stray Livestock and Desert to Survive Depleting Rations
The North Korean authorities have implemented strict restrictions on m...