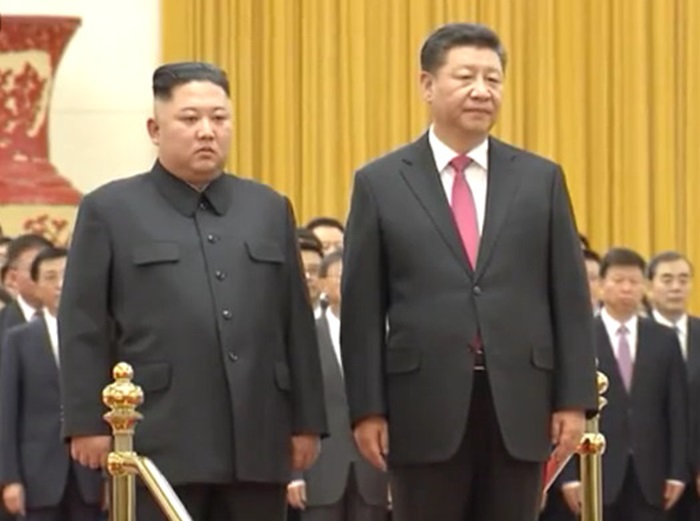 The editing was also quite different. In a scene where a large table is in between the two leaders, the North Korean media focused on Kim Jong-un's remarks, to which Xi Jinping seems to be listening attentively. The aim was likely to create the impression that Xi Jinping and Kim Jong-un are equals.

On the contrary, the Chinese broadcast mainly showed Kim Jong-un respectfully listening to Xi Jinping's speech. In particular, Kim was shown taking notes three times. He was portrayed as a student listening to a teacher with gratitude.

The 'note-taking scenes' were also used repeatedly during Kim's first visit to China (March 2018). Obviously, these humiliating scenes were omitted from the North Korean broadcast.

When comparing the images televised in North Korea and China, it seems that many images of the two leaders side by side were shot with the same camera. It is presumed that the Chinese side took charge of videotaping and later provided the images to North Korea.

Of course, the taping at the official talks would have been discussed in advance between the two countries. Therefore, it is possible that the humiliating 'note-taking scene' was the result of a request from China for Kim Jong-un to 'take notes' and North Korea's consent. The 'note-taking scene' seems to symbolize the current relations between North Korea and China. (ISHIMARU Jiro)