KWP warns delinquent members they will be expelled
The Korean Workers' Party (KWP) has been pushing a renewal of the party membership card since the end of August. This initiative is slated to come to an end by October 10, the anniversary day of the founding of the KWP. At the same time, the Party is imposing stricter measures to punish delinquent members, including expulsion from the Party of those regarded as disloyal to the organ's principles.
Our North Korea reporting partner, a resident of Hoeryong, North Hamkyung Province, brought us the following information via a phone conversation made earlier this month.

"The new party membership card will be issued on October 10. Prior to this, instructions were given from the Party central to the local branch organs that delinquent members, or those absent from the workplace, should be expelled from the Party."

The KWP is an organ with huge power that controls all institutions of the North Korean state. All of the state policies are implemented under the instructions and control of the Party. Because of this, participation in the KWP is a prerequisite for advancement in all facets of North Korean life. For instance, to rise to the rank of work-unit chief at a farming collective, it is required that a person be a member of KWP, as well as have a record of ten years military service and a four year university diploma. 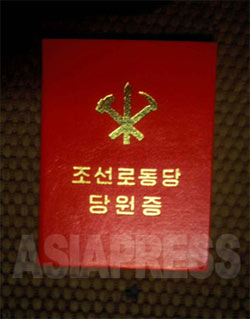 The cover page of a membership card/book of the Korean Workers' Party. (August. 1997. Taken by ISHIMARU Jiro) ASIAPRESS

Usually, members of the KWP will belong to a local branch of their own region. They are required to attend the Life Assembly (a meeting for mutual criticism held on a weekly basis), and pay a membership fee. Each member is tasked with conducting missions given out by the organ. Members have the benefit of assuming a leadership role in the workplace, factory or group they belong to.

Until recently in North Korea, the punishment meted out to delinquent members was vague. This was because both ordinary members and ranked officials were compelled to get involved in 'side-businesses' such as farming or trading. It was thus unsurprising that party activities were often put on the back-burner so as to earn whatever capital they could to compensate for the struggling North Korean economy, which collapsed in the 1990s.

Mr. Han Song-cheol (a defector, left North Korea in 2009), who is acquainted with the KWP system explains as follows;
" Expulsion from the Party means the deprivation of all political life in North Korea. Those who are expelled experience a dramatic loss of political status, much worse than those who are not allowed to join the Party. The chance for re-participation is almost impossible, except for in extraordinary cases, such as if the excommunicated individual is given express permission from the top to rejoin the Party. Alternately, the only other chance a person might have to be brought back into the fold, could arise if he/she demonstrates exceptional devotion to the Party."

Expulsion is recorded in the detailed personal files (known simply as a 'document'), which the state keeps on each member. These files are not only on the person concerned, but also their children. It can be said that 'This person's parent has been punished by expulsion from the Party'. This punishment goes on to influence the children's future, affecting their employment prospects and career progress.
To gain insight as to the reason for the crackdown on Party members', we should look back to the era of Kim Jong-il.

In a bylaw of the KWP, which has been amended last year, the KWP is newly described as the party of Comrade Kim Il-sung and C omrade Kim Jong-il. Adding to this, Kim Jong-un's picture will be printed in the new Party membership card, along with Kim Jong-il.

It is deemed that the state will forge ahead with plans for the restructuring and that only Kim Jong-un, as the legitimate successor, should run the Party organ. In addition to his father's legacy, Kim Jong-un is thus also linked directly to his grandfather, Kim Il-sung. His father, Kim Jong-il will be idolized as a Supreme Being, and Kim Jong-un will be appointed as his successor within the state structure.

Thus, the Party threatens is members with expulsion to instill absolute obedience as core members supporting the three-generation power succession of Kim Jong-un, through the redefinition of the KWP as the 'Party of Kim Il-sung and Kim Jong-il.'

These matters, however, are not expected to run entirely without difficulties. Currently, the North Korean economic situation does not show any signs of improving. If the Party imposes measures to punish delinquent members, considerable numbers of members will fall foul of the crackdown.
Each Party member has to feed their own family, and will naturally do what they need to do to save their own skin. The punishment will be symbolic and exemplary. Furthermore, it will come as no surprise to anyone that bribery will characterize the relationships between those punishing and those attempting to escape expulsion from the KWP.