People knew nothing about the purge, but felt signs it was coming
After the South Korean National Intelligence Service (NIS) announced that the North Korean National Defense Commission's vice chairman Jang Song-taek had been dismissed from his position and two of his close aides were publicly executed by firing squad, the news made headlines throughout the world.

ASIAPRESS North Korea Reporting Team has reached out to get information focusing on the reactions of the people within North Korea. The following is a short phone interview made with our reporting partner living in the northern part of North Korea, an area where the Chinese carrier mobile phone functions. 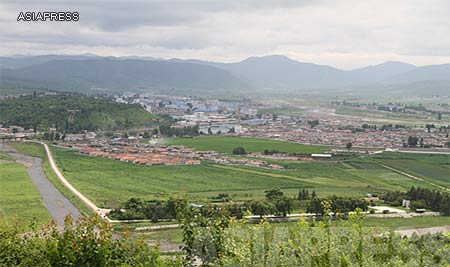 (Reference Photo) North Korea's border town, Hyoeryong, North Hamkyung Province.
The river flowing from left to right is the Tuman-gang(Tumen River). Chinese carrier mobile phones function in the border area and allow us to receive information. (Photo was taken from the Chinese side. June/2010) ASIAPRESS

- How is the situation in North Korea?

ASIAPRESS reporting partner in North Korea (Partner):
I feel tensions are a little high. The winter training started on the 1st of December. It is an unsettling atmosphere because we will be having the mourning period (of the late General Secretary Kim Jong-il) soon. (NOTE; the winter training: a seasonal military training mobilizing civilians.)

- We have news that vice-chairman Jang Song-taek has been removed from his position and his close aides have been publicly executed by firing squad. Have you heard anything about this news in North Korea?

Partner: I have heard rumors that Jang Song-taek has "fallen" a while ago. But I never heard that his close aides have been executed. Even if there is an execution, those kinds of executions would be conducted in a private place, I think.

- Were there any lectures or meetings intended for the ordinary citizens and workers concerning the dismissal of Jang Song-taek?

Partner: No. We have not had those kinds of meetings referring to the dismissal or the execution so far.

- The outside media is buzzing with the news of Jang Song-taek's dismissal and the execution of his close aides.

Partner: At least, people around me do not know about the news. Perhaps people outside of our country know more about the story. 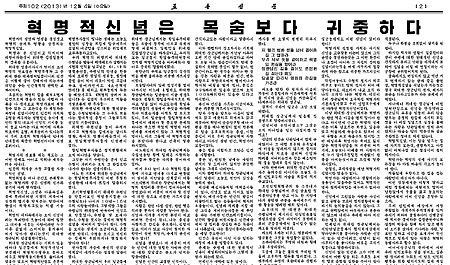 The article posted on Rodong Sinmun, the official mouth organ of the Korean Workers' Party, titled "The revolutionary belief has higher value than life" on 4 December 2013.

At the time of our interview thorough the phone, the North Korean state media did not make an announcement about Jang Song-taek's dismissal. In North Korea, where there is no independent media, rumor is the fastest way for information to be transferred among the people. Through the interview with our partner, we found out that people had heard signs connected to the event but never thought it was going to turn into such a great issue.

Rodong Sinmun growls in the spirit of loyalty

Rodong Sinmun, the official mouth organ of the Korean Workers' Party, posted an article titled "The revolutionary belief has higher value than life" on 4 December 2013. In the article, the words of the late Kim Jong-il were quoted;
"However much you were loyal to the party for years in the past, you are not regarded as a faithful loyal subject if you are not loyal to the party today. If your mind is somewhere else, or if you intend to walk another path, (snip) you will be discarded by history. There is no 99% when it comes to loyalty, only 100% loyalty exists".

The article continued as follows,
"To anybody lacking belief, regardless of his position and past work, no mercy shall be given, and they should be punished harshly."

This article was posted a day after the announcement by the South Korean authorities on Jang Song-taek's dismissal. The above comments are taken as indirect remarks on the event by the North Korean state.

North Korea has experienced a series of liquidations and purges in the past. However this time, the subject of the purge is Jang Song-taek who is at the very core of political power, enjoying a position as the proponent of Kim Jong-il and Kim Jong-un for many years. It is predicted that the influence of the liquidation will be far-reaching in various fields throughout the North Korea.
*** Rimjin-gang
(* ASIAPRESS smuggles Chinese carrier mobile phones into North Korea that function in the border area of North Korea. Using these, our North Korean reporters and reporting partners communicate with us on the latest developments. )

Facebook Twitter はてブ Pocket Feedly
RECOMMENDATIONS
＜Inside N. Korea＞ Major Factory Shuts Down as Workers Leave Following 6 Months of Unpaid Labor
In North Korea, where the economic downturn is worsening due to the Ch...
Kim Jong-un Loses of Weight… But North Korean People Are Indifferent
I visited South Korea for a month from the end of August. It has been...
＜Inside N. Korea＞ 'Crowd trials' carried out nationwide
2018/Jul/19 It has been reported that "crowd trials" (public trials),...
Rimjin-gang - Periodic Report(2011-Feb-09)
I am the chief editor publisher of Rimjin-gang, Ishimaru Jiro. The Rim...
＜Inside N. Korea＞ Authorities and Families Anxious Following Mass Pardon of Malnourished Prisoners
The Kim Jong-un regime is planning a “great amnesty” or mass pardon s...
＜Inside N. Korea＞ Expansion of the market economy as the driving force behind social transformation--based on sources from inside N.Korea. (PART2)  The black market and “farmer’s market” connect. by ISHIMARU Jiro
2016/Dec/20 ◆ How did the expansion of the market economy take place?...