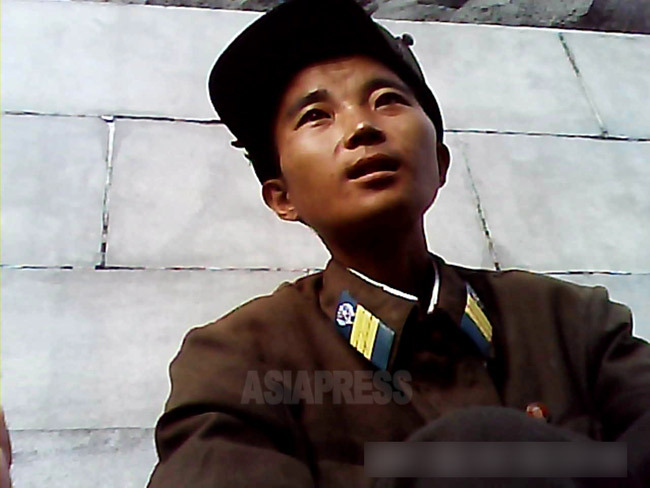 (Photo) A thin neck and a saggy military uniform.“I’m on my way back to my hometown because of malnutrition,” said the 30-year-old petty officer. He was a member of a construction unit.Photographed in the northern region of North Korea in August 2013 (ASIAPRESS).

◆Parents punished if their children refuse to enlist

The Kim Jong-un regime has decided to cut the length of military service down to eight years for men and five years for women this spring, and to deploy discharged soldiers toagriculture, mining, and other fields where production has been hampered by labor shortages. On the other hand, the enlistment of those graduating from high school was carried out normally, as in previous years.This article sheds light on the current status of enlistment in North Korea. (Kang Ji-won / ISHIMARU Jiro)

Since late March, our reporting partners living in the northern part of the country have been meeting with officials of the “Military Mobilization Department,”which handles military service affairs under the Ministry of National Defence’s Column Replacement Bureau. ASIAPRESS also interviewed several parents whose sons are going to join the military this spring.

The selection of new recruits was affected by the coronavirus pandemic as well, as physical examinations of recruits were delayed in order tobe conducted separatelyin schoolsacross various regions.

“An instructor from the Military Mobilization Department told us that although recruitment is basically finished, the process of physical examinations and final interviews has been delayed, so the process may take a little longer this year," said a reporting partner.

According to the official, this year's policy was to prioritize students graduating from upper secondary schools, allowing for them to enter universities.This is because of the central government's instruction to focus on training technical personnel.Students with good grades were encouraged to go to higher education, and in one of the middle schools in the northern part of the country, 8 out of 32 graduates went to university.

Students who are not able to go to college are either enlisted in the military or placed in workplaces by the labour department of the People's Committee (local government).The following is a Q&A with areporting partner who researched the process.

Q: “What are the height and weight standards for this year's enlistees in the physical examinations?”

A: “The passing height for boys is 142 cm. There is no standard for weight, and unless they are really skinny and frail, they are allowed to enlist.”

Q: “I have heard that there is a growing trend of people trying to avoid joining the military.”

A: “Since there is still a tendency in North Korean society to believe that one must serve in the military and become a member of the Workers' Party in order to get anywhere in life, many parents consider sending their sons to the military.On the other hand, the world today is all about money. Even if you become a member of the Party, you are still bound by it, and it is better to earn money by doing business than by gaining higher status. In addition, many of the new recruits who join the army become malnourished because of the poor food. Therefore, parents who are aware of this system and 'the situation in the world' try to prevent their sons from enlisting by making up excuses for exemptionsuch as epilepsy or another chronic illness. This has become more prevalent over the past few years.”

Q: “What happens if someone tries to avoid enlistment?”

A: “Those who do not want to join the military will be called ‘evaders,’ and they will lose any chance to join the party, be promoted to executive positions, be recommended for promotion, etc. The label of ‘evader’ will follow them forever.”

Q: “Conversely, in what cases is a person not allowed to enlist in the military?”

A: “Those who have mental problems or have family members who have committed murder, been sentenced to death, or are political prisoners will be excluded from enlistment, and are usually placed in rural areas or in ordinary workplaces after graduation.”

Q: “With the number of people joining the military decreasing every year, will there be punishment if ‘evasion’ is exposed?”

A: “If their sons refuse to enlist or their ‘evasion’ is discovered, the parents are jointly liable to be stripped of their positions or, in the case of Party members, punished with measures to leave the Party. There were a few cases of this in the middle school we investigated.In cases where the parents are not Party members and are just ordinary farm workers, they are forced to work without compensation.”

Facebook Twitter はてブ Pocket Feedly
RECOMMENDATIONS
Price is rising up due to a cornering sign of sanctions (ISHIMARU JIRO)
UN Security Council unanimously made a resolution to impose sanctions ...
＜Inside N. Korea＞ Price Plunge: Pyongyang Properties Depreciate Severely as Sanctions Knock Housing Market Nationwide
Apartment prices are reportedly plunging across North Korea in the wak...
＜Interview with N.Koreans＞ "Is it any better in Kim Jong-un Era? Not at all! Preferential treatment is given to the Party officials by sacrificing the needs of the residents in the regions outside of Pyongyang!"
2015/December/13 Edit by KANG Ji-won, defector reporter, Rimjin-gang &...
＜Inside N. Korea＞ Market survey shows “Resolution 2270”, the toughest-ever sanctions, didn’t work.
2016/Dec/6 For the last seven months, the ASIAPRESS reporting team ha...
＜Inside North Korea＞ “The 7 Year-Old Sent From God”: Why Fortune-tellers are Thriving Despite Regime Crackdown
According to a reporting partner from Ryanggang Province, fortune-tell...
＜Inside N. Korea＞ Homeless and Helpless: Residents Young and Old Beg as Population Fears a “Second Arduous March”
◆ People’s lives deteriorating as sanctions continue There is a growin...
＜Inside N. Korea＞ Residents Begin to Panic as Border Shutdown Blocks Chinese Imports and Induces Inflation
◆ “If the blockade continues, there will be panic” In a bid to prevent...
＜Inside N. Korea＞ Authorities Ordered to House More Homeless, Internal Documents State, as Economic Paralysis of Coronavirus Worsens
The economic decline in North Korea is getting more and more serious. ...
"Interest in President Moon Jae-in and expectations from his visit hav...
＜PHOTO REPORT＞Sino - N.Korea Border: ［PART2］A Sign of Late Spring In the Border Town of Hyesan
2014/April/19 (This report first appeared in the Korean and Japanese e...