Sino-North Korean border report:
- Wire Fence Installed Along The Entire Tuman-gang Borderline
2014/March/26
(This report first appeared in the Korean and Japanese edition of the ASIAPRESS North Korea report in September 2013. All the information is from that report.)

ASIAPRESS North Korea Reporting Team has carried out intensive coverage across the Sino-North Korean border from the Chinese side. The installation of the barbed wire fence, which the Chinese authorities have been forging ahead with, is being erected with the purpose of preventing the inflow of defectors and putting an end to the smuggling going on between North Korea and China. The wire fence currently stretches across the whole length of the Tuman-gang (Tumen River). Further to this, on the Chinese side, the construction of a high-speed railway, connecting the center of Jilin Province to the rest of Yanbian Korean Autonomous Prefecture, has now reached the Prefecture's eastern city, Tumen.

The on-going changes along the Sino-North Korean border area and the developments of the 1,400 km (870 miles) borderline reflect the strengthening economical relationship between China and North Korea. Spending time in the border area it is possible to more fully understand how the Chinese really feel towards North Korea and the Kim Jong-un regime.

This is a photo report by the ASIAPRESS team on the changing situation along the Sino-North Korea border area. 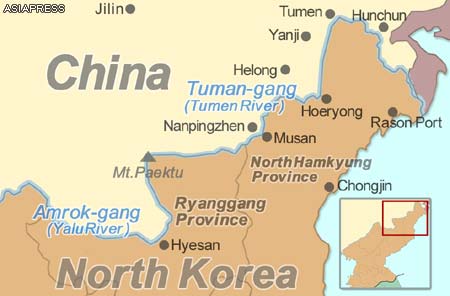 Major cities along the border between China and North Korea, marked by the Tuman-gang (Tumen River)

High-speed railway connecting Jilin City and Hunchun
The team started its reporting journey from Yanji, capital of the Yanbian Korean Autonomous Prefecture. Traveling to the border town of Tumen, areas of large-scale construction were unavoidable as work on the high-speed rail line continued. Heavy machinery - loading shovels and dump trucks - are everywhere along the Tuman-gang (Tumen River) and construction workers can be seen busy at work.

Currently under construction is a high-speed railway 360km (223 miles) in length, starting from Jilin City stretching to Hunchun, via Tumen City. Jilin's local newspaper Xinwenhuabaoboasted, in their article of 8 June 2013, that when the railway, designed to reach speeds of up to 250km/h (155 mile/h) begins operations, travel time to Changchun (Jilin's Provincial capital) from Hunchun will be reduced by one-third. 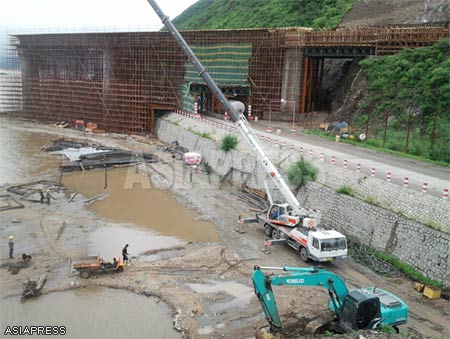 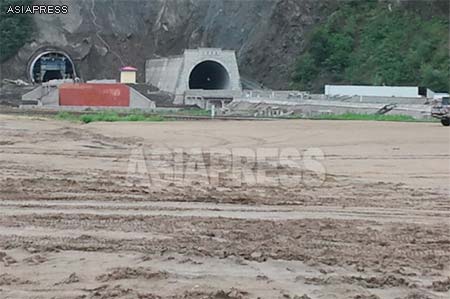 Construction sites appeared everywhere along the route from Jilin's capital to the North Korean border. The photo above shows a tunnel under construction. (July 2013. Tumen City) ASIAPRESS

According to local residents living near the construction sites, Chinese authorities are building an industrial distribution center in Qushui, 8km (5miles) from Tumen, on the way to Yanji. It is speculated that, once everything is completed, this will be a depot for containers from North Korea and Russia. 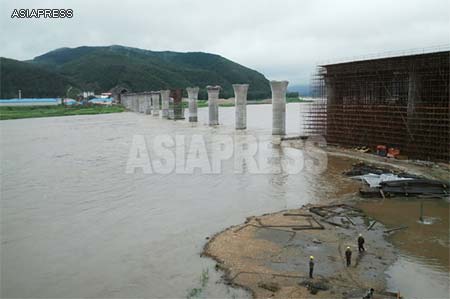 In this photo, bridgework for the high-speed railway is on going. (July 2013. Tumen City) ASIAPRESS

Wire fence installed all along the Tuman-gang (Tumen River)
The road from Tumen to Hunchun was congested in several areas by ongoing expansion works. Construction materials lay in a haphazard fashion at the side of the two-lane, tarmac road. Pockmarked and uneven at the best of times, it seemed that care of work was not a priority in the rush to widen the transit routes.

It has been confirmed through our field reporting that the installation of a barbed wire fence, started several years ago, has been completed at the lower ends of the river. In the upper areas, where the river is again narrower, installation has almost been completed. In areas where the terrain makes it more difficult for people to cross on foot, there are no such barriers in place. 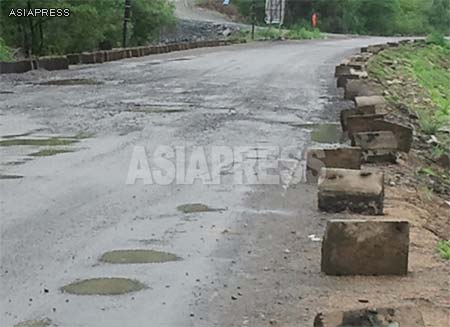 The expansion works were on going in the border road along the Tuman-gang (Tumen River) between Tumen and Hunchun (July 2013. Hunchung) ASIAPRESS 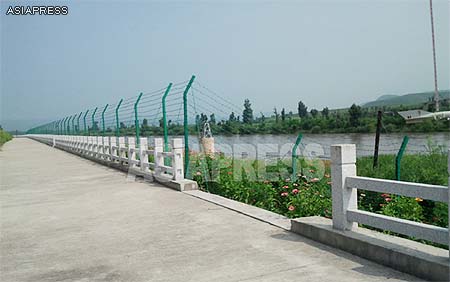 The newly installed wire fence on the Chinese side of the Tuman-gang (Tumen River). On the opposite side is Onsong County, North Korea. (Photo taken in the end of July, 2013) ASIAPRESS 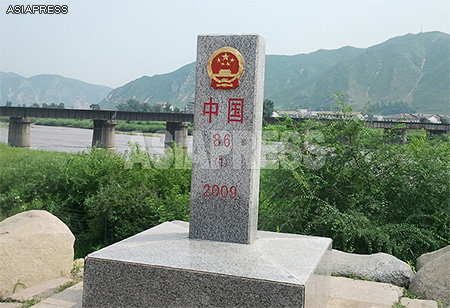 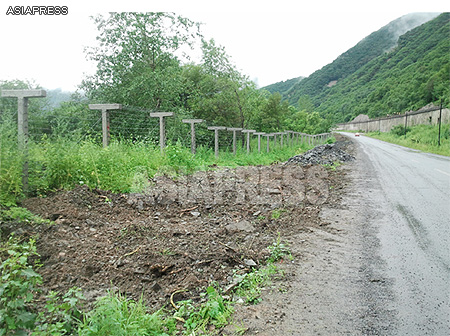 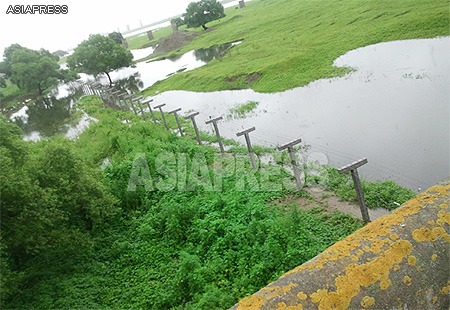 The wire fence was installed along the indented riverbank (Hunchun, China, end of July, 2013) ASIAPRESS

In the last several years, dozens of criminal cases concerning North Koreans involved in cross-border drug smuggling, and the aggravated robbery of local Chinese homes by North Korean soldiers have come to the attention of the Chinese courts. Added to these cases, the area has become a junction for human trafficking, and a considerable number of defectors have illegally crossed the Tuman-gang (Tumen River) into China. These cases continue to be seen as a serious annoyance for the Chinese authorities.

Such "disintegration of order in the border area" has, for the most part, occurred along the central upper points of the river, where it is known to be relatively narrow. Resultantly, for a while it seemed as if the same kind of barriers would not be erected along the lower points of the river. These assumptions were proven false, however, when the fence was enlarged downstream of the Tuman-gang, running parallel to the road. As part of the efforts to beef up border security, frequent patrols both by border guard authorities and the Chinese People's Liberation Army are now routine and an increased number of surveillance cameras have been installed along the river. The tightening of security along the border areas is a clear indicator of the intentions of the Chinese towards North Korea.

The influence of China's firm stance is already discernible.
" Smuggling at the Tuman-gang is dead," North Korean residents who live near the Tuman-gang bemoan. The number of defections is also apparently decreasing.