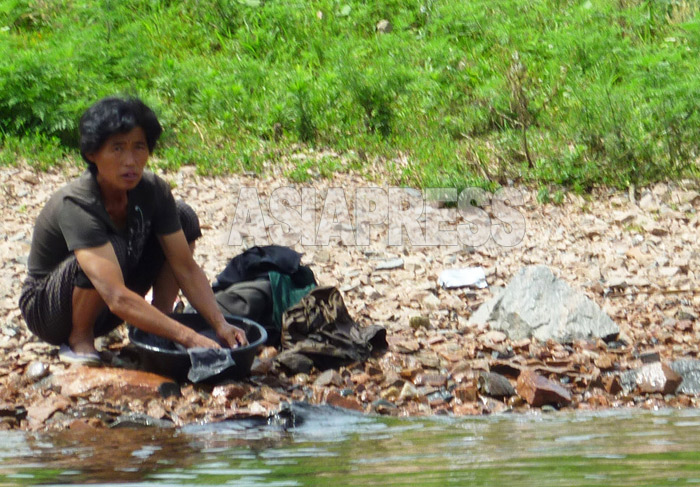 A woman is washing in the Yalu River. She isn’t permitted to approach the riverside without clearance from the border guard. Taken by ISHIMARU Jiro from the Chinese side in July 2017. (ASIAPRESS)

In late July ASIAPRESS reporter recently visited the Yalu River on the Sino-North Korean border. Sakjoo County, in north Hamkyung Province lies across the river from China. The area resembles any other rural, peaceful place, but a closer look reveals endless rows of barbed wire along the North Korean side of the river.

The barbed wire is in place to prevent defections and smuggling between North Korea and China.

The Yalu River is a precious source of water for North Koreans. They use the river for washing, bathing and fishing. It is also a source of drinking water. The barbed wire separates local residents from the river and must be causing a great deal of difficulty for ordinary people.

Compounding matters, further upstream the wire has been electrified. A Korean Chinese who accompanied the reporter lamented: “The whole nation became a prison camp.” (ISHIMARU Jiro) 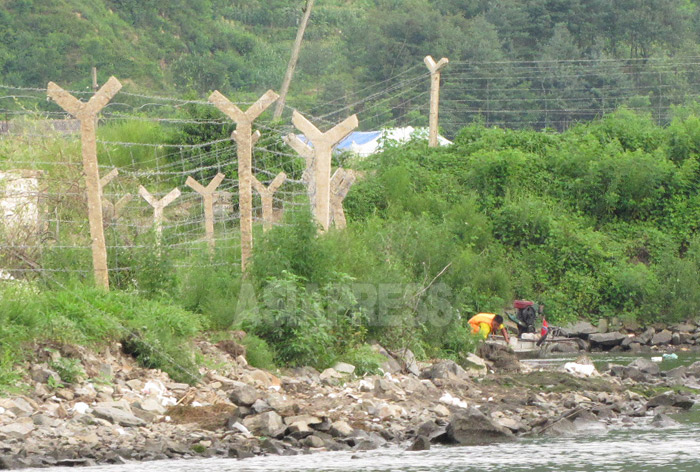 More and more barbed wire has appeared on the North Korean side in recent years. A boat is launched on the river for net casting. Taken by ISHIMARU Jiro from the Chinese side in July 2017. (ASIAPRESS) 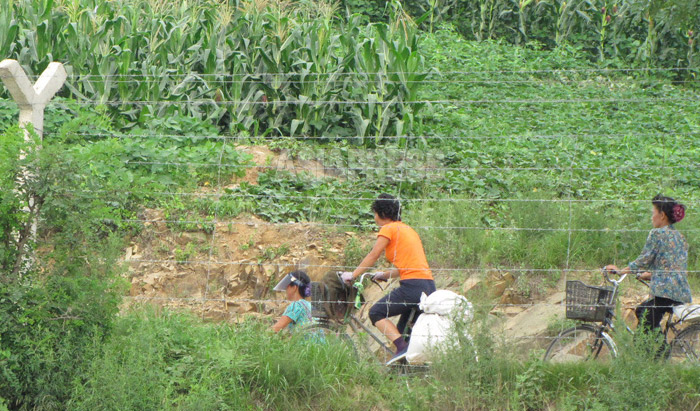 Are businesswomen coming home after work? Women rapidly pass by the wire on bikes. Taken by ISHIMARU Jiro from the Chinese side in July 2017. (ASIAPRESS) 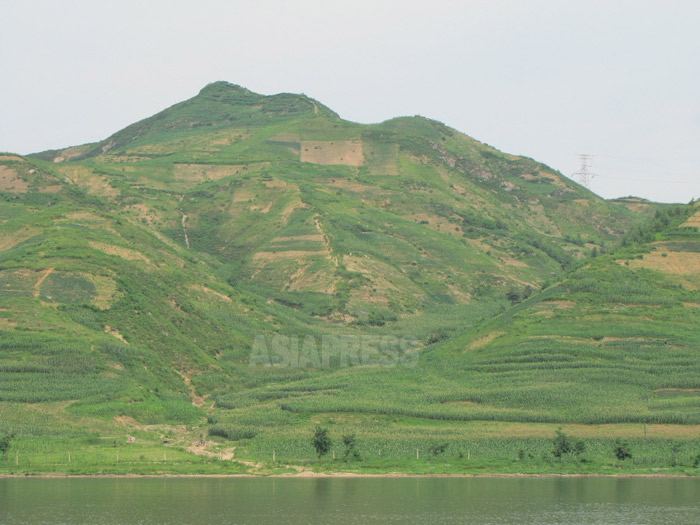 Even steep hills have been reclaimed in North Korea. Reckless deforestation is the cause of flooding. Taken by ISHIMARU Jiro from the Chinese side in July 2017 (ASIAPRESS)

Facebook Twitter はてブ Pocket Feedly
RECOMMENDATIONS
＜Local Interview＞ Is N. Korea’s “victory over COVID-19” legit? (2) “Cadres are now contracting the virus”
The Kim Jong-un regime declared the end to the COVID-19 pandemic and v...
＜Inside N.Korea＞ Expansion of the market economy as the driving force behind social transformation--based on sources from inside N.Korea. (PART7) Information from outside being commodified and spread across the country. The government is losing control of the movement of citizens. by ISHIMARU Jiro
2016/Dec/28 5-3 The control of information is being weakened The Nort...
〈Photo Report 3〉Widening Gaps - The Privileged Enjoy a Luxurious Life And the Homeless Suffer Harsh Days
2011/December/15 Report by Gu Gwang-ho (June, 2011) Our country's TV n...
＜Inside N. Korea＞Trade with China Set to Resume in March with Fertilizer Imports as Top Priority
North Korea has begun to work toward the resumption of trade with Chin...
＜Latest Report on N.Korea＞Another year of emaciated soldiers in N.Korea; Young Soldiers suffering with Malnutrition (Four Photos)
In late July, a reporter for ASIAPRESS was on a cruise ship on the Ya...
"You must start with denuclearization"...S. Korean Media Reports that Xi Pressured Kim to Give up Nukes at January Meeting
◆Recently obtained excerpts of summit suggest Kim disregarded Xi’s gui...