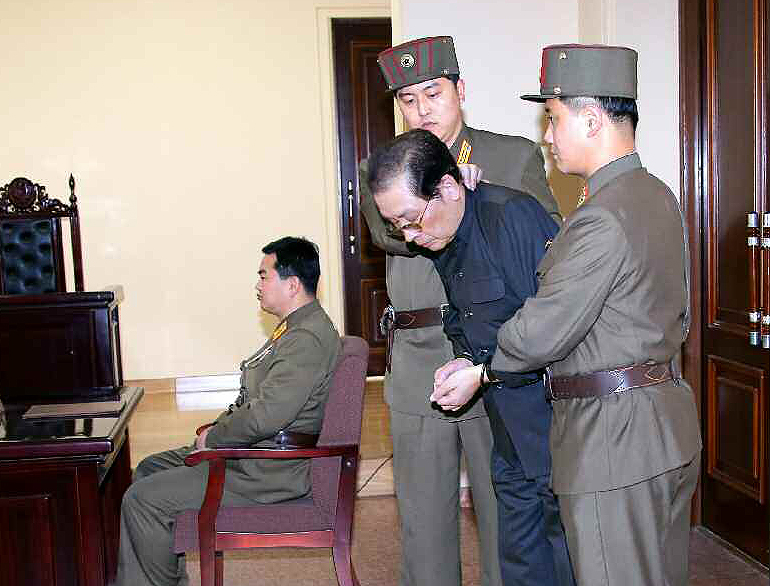 (Photo) Jang Song-thaek, who was sentenced to death and executed. Taken in December 2013 (Rodong Sinmun)

Rumors are spreading across North Korea. Reportedly, 4 foreign ministry officials, held responsible for the failure of the Hanoi summit in late February, were executed by firing squad in Pyongyang in April. It is not clear whether or not the executions actually took place but rumors of such are widespread, not only in Pyongyang, but in the provincial cities as well. (Kang Ji-won/ISHIMARU Jiro)

A North Korean trade official who was visiting China from Pyongyang in mid-April told a Chinese reporting partner for ASIAPRESS, “I heard that 4 foreign ministry officials, held responsible for the failure of the Trump meeting, were shot to death.” He added, however, that there were no details and that it was “nothing more than rumors”.

On April 22, a reporting partner living in a city in North Hamkyung Province also gave related information. This time there were more specifics.

“They say the executions took place in Pyongyang in early April when a total of four people, including an official from the North Korean embassy in Hanoi and a foreign ministry official were shot in front of a gathering of officials from the Central Party and the Ministry of People’s Armed Forces. The Hanoi embassy official had sold information from our side to the Americans before the summit took place. The talks ended in failure because Trump knew the information in advance,” the reporting partner said.

The reporting partner explained how they had come across the information, saying, “In the city where I live, several officials were talking about the execution of a Foreign Ministry official. It seemed as if they were doing so on purpose- it even feels like the authorities are spreading information about the shooting intentionally. It's on the lips of lots of ordinary people.”

What has been the public response to this information?

According to the reporting partner, people are asking, “If they were executed, how important was the material that was handed over?” There are also some people who question the information, asking, “Was it 4 people rather than one who turned sides?”

Next page : Is the motive to pass the buck for the failure of the summit?…

1 2
Facebook Twitter はてブ Pocket Feedly
RECOMMENDATIONS
Farmers Starve in N.Korea - Excessive Seizure of Rice For The Military Exacerbates The Rural Food Shortage
2014/April/22 Written by PAEK Chang-ryong, a defector reporterFirst Se...
＜Inside N. Korea＞ Kotchebi, the Homeless, Under the Kim Jong-un Regime
2016/Dec/2 “Kotchebi” is a North Korean word only. It is not in the K...
＜Inside N. Korea＞ Corrupt File: Police Crack Down on Chinese Drama Portraying Fall of Corrupt Qing Dynasty
In North Korea, a Chinese drama called “Nothing Gold Can Stay” is secr...
＜Inside N.Korea＞ Tighter Control of Inter-provincial Movement: Investigating corruption in Hoeryong City’s People’s Security Station
On August 2, an ASIAPRESS reporting partner in North Hamkyung Provinc...
〈Photo Report 4〉Inspection At The Metro Station Entrance - "No Shabby Cloths, No Large Luggage!"
<Photo Report>- 4 Inspection At The Metro Station Entrance - "No...
＜Inside N. Korea＞Porn and Punishment: What a Sex Scandal Reveals about the Regime’s Struggle to Control Outside Information
◆80 arrests and a massive rally to protect the youth from ‘foreign inf...
＜Inside N. Korea＞ Homeless and Helpless: Residents Young and Old Beg as Population Fears a “Second Arduous March”
◆ People’s lives deteriorating as sanctions continue There is a growin...
"I Want to Keep Reporting Till the Moment I Die"
2012/June/10 (Note: This message was written before the death of North...
＜Inside N. Korea＞ Kim Jong-un Gives Direct Order to Crackdown on Cash Brokers: “S. Korean agents are painting Chinese banknotes with coronavirus and sending them here”
North Korean authorities have launched a sweeping crackdown on remitt...
＜Photo Report＞ Female Soldiers in Miserable Conditions: Seven Years of Military Service Starting at 17 Years Old.
2017/Jan/24 Parents, whose daughters will graduate from high school, ...