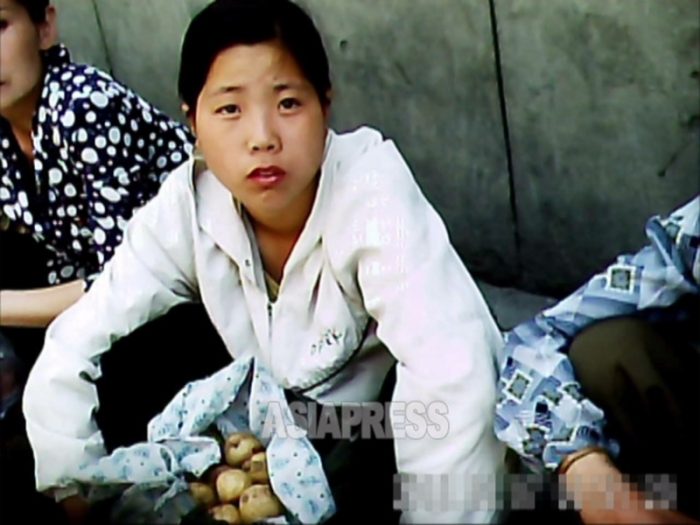 A young woman sells potatoes on the street near an apartment block in central Pyongyang. (ASIAPRESS)

Two years have passed since the international community imposed the ‘strongest economic sanctions in history’ on North Korea. So, how has the economy in Pyongyang fared? In December 2019, a Chinese member of ASIAPRESS sat down with a visiting North Korean trade official to find out.

--What is the outlook for the economy?
“The economic sanctions have continued, with nothing changing after [Kim Jong-un’s] meeting with Trump in June. We don’t have high hopes. Those working for foreign currency-earning organizations, as well as those in Pyongyang are unhappy and anxious. They complain to each other, saying, ‘Things are hopeless.’”

--Has the trade slump continued?
“There is still no coal being traded and the trade companies are looking to export other items. The main exports to China now are collected from the mountains by locals- medicinal herbs, pine nuts, etc. Red beans are also being exported.”

◆ Markets going through a recession

--How about life for Pyongyang citizens? How are the markets doing?
“There are no sales being made at any of the markets. People in Pyongyang complain about the current recession, saying, ‘We have to go 100 ri (roughly 40 kilometers) to make 1,000 won.’ They still collect the daily market tax from each stall but many traders are not coming to the markets anymore because they can’t even earn that much.”

Officials are registering as “mobilized effort foreign currency-earning enterprises” to make inroads into the retail market. Sales at markets have worsened because officials negotiated with the authorities to build wholesale retail stores. They intend to use their authority to monopolize retail profits.”

※ A note on foreign currency-earning through mobilization of the public: Since the 1970’s, the authorities have set quotas for residents across the country to collect medicinal herbs, pine nuts, and mushrooms to be sold abroad. Residents would receive no remuneration for their collections but would give over the items as a show of loyalty to the party. This practice disappeared in the late 1990’s however. Since then, it has been reintroduced but now citizens are paid for the items they collect. With this incentive, residents actively collect these items and bring them to “mobilized effort foreign currency-earning offices,” which compete for the residents’ goods with other agencies. Wholesale stores created by these foreign currency-earning offices though have put pressure on the existing markets.

Next page :Residents baulk at resource demands for state projects...